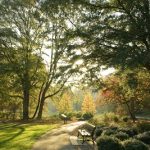 After decades of neglect, the people of Atlanta’s Druid Hills came together in 1997 to restore famed landscape architect Frederick Olmsted’s final project — a 45 acre park known as Olmsted Linear Park. Though faithful to Olmsted’s original plan, the Olmsted Linear Park Alliance decided to keep a children’s play area, relocating it to more… END_OF_DOCUMENT_TOKEN_TO_BE_REPLACED 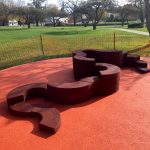 What do you do with our Curvy Blocks? If you’re an adult, you might see these modular, C and S shaped rubber blocks as a low partition or seating. To a child, they see forts, or a stage, a series of jumps, a maze or a wall to climb. Available in a range of colors,… END_OF_DOCUMENT_TOKEN_TO_BE_REPLACED 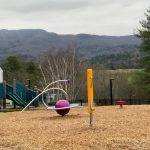 Goric founder Rick Henke designed the first playground at Ben & Jerry’s Vermont ice cream plant. His son, Jonathan, led the team that built it. Twenty years later, when the wooden post and beam playground needed upgrading, it was only natural for the company to again call upon Goric. We developed a plan to refurbish… END_OF_DOCUMENT_TOKEN_TO_BE_REPLACED

Historically, an industrial area, Fort Point in Boston has been built up to be an attractive urban neighborhood with brick building residential lofts and modern office buildings. The neighborhood features fine dining, museums and of course the harbor views on all sides. The Conlastic stainless steel play elements were a perfect fit for this pocket… END_OF_DOCUMENT_TOKEN_TO_BE_REPLACED

This 12-acre bayfront park opened in May of 2014 and touts currently being largest urban park in San Diego.  This elaborate park and playground features the Carved designed “Pearls” for climbing up and around the hill. The Jumper and Turning Point were finished to match the look of the Pearls perfectly.  We have heard from… END_OF_DOCUMENT_TOKEN_TO_BE_REPLACED

Not your typical playground, this site features lots of mounds surrounding a sand pit with non-intrusive play pieces. The stainless steel sculptural elements adorn the mounds and provide delightful surprises for the children ready to climb. This playground is visually stunning against the orange fence backdrop and the bright green Kraiburg “Insitu” rubber surfacing.

In 2010, Goric Marketing Group USA, Inc. was approached by an enthusiastic group representing the Boston Children’s Hospital Build a Playground Project at the Southwest Corridor in Boston. In their playground research they found Goric to be the innovative and creative group that would suit their project well. Additionally, they found pictures of the Wallholla… END_OF_DOCUMENT_TOKEN_TO_BE_REPLACED 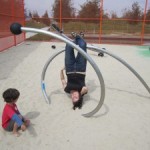