On the last day of my recent trip to LA, I took my sister and the two little boys whom she nannies to a recent playground project I worked on, designed by The Office of James Burnett and Michael Maltzan’s office.

“I don’t see a playground” says Liam, 4 years old and as fun and enthusiastic as they come.  I assure him we are going somewhere to play.  As we walk through the winding pathway he discovers the peaking green mounds and exclaims “I see it! It is a playground!” 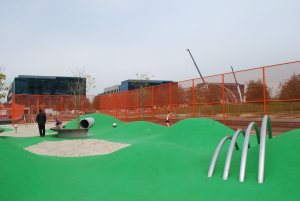 I loved when Liam asked me “how do I play with this?”  I told him “anyway you want!”  Isn’t that the essence of what a playground should be?  -A place to discover and learn by playing and experimenting with the equipment. Children should have the freedom to play as they are able and as they are comfortable challenging themselves.  What does that mean?

For example: the Waterfall on the big mound.  This was so attractive to both Liam and his little brother Emerson. The Waterfall is really for children 5 years and older who have the strength and ability to climb up or slide down it like a banister.  I allowed them to try it out with our strict supervision.  They both went at their own pace and ability: Emerson hugged the two rails as he hiked up the mountain and then needed assistance to get back down, only to climb back up again; Liam climbed up quite easily and found ways to slide or climb back down.  They both loved being the kings of the mountain.  It was so fun to watch. 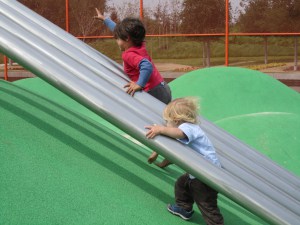 The Turning point also appealed to both children.  Emerson enjoyed just spinning the ball with his hands; Liam also liked to spin it and even tried laying on it on his belly.  I also tried spinning belly first.  As an adult my belly isn’t as forgiving as when I was a child but it was still a good spin! 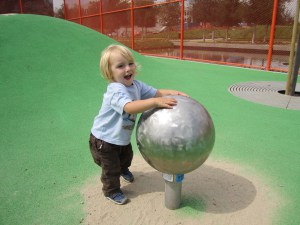 The boys loved jumping on the Jumper: I would hold their hands while they jumped up and down on it.

Liam could easily hang on the Spaghetti 2  but couldn’t reach the Spaghettini as easily.  He asked for a lift but my sister, Charlie, reminded him what his teachers say at his preschool: “if they need help getting on to a playground apparatus then they aren’t ready to use it”.  Quite good advice I would say.  So I decided to show him what he could do when he’s a little older.  Yes, I hung upside down on the Spaghettini.  I haven’t done that in….well, since I was 12 or so. Ah! It’s so fun when you have an excuse to try out playground equipment.  Of course I need to know how
it works and how it feels!

And lastly we all tried out the double seater seesaw, The Rodeo.  No picture for this unfortunately  since we were all riding.  It felt smooth and secure knowing that there was a soft rubber bumper below my seat.

I definitely recommend checking out this hidden playground. Don’t forget to bring some children with you so that you too may try out all of the stationary and moving stainless steel sculptures yourself!

PS. The EuroFlex Insitu surfacing on this playground looks and feels great (consistent and firm)and is perfect for covering the mounds and contours.