The journey of Dutch designer Noa Haim into paper structure began in 2008 at the London Festival of Architecture, where she developed a participatory installation as part of her graduate work as an architecture student at the Berlage Institute. With the assistance of the FabLab Den Haag and volunteer teams of builders, Haim created a 2000-piece interlocking structure based on a modification of Buckminster Fuller’s 1961 patent, the octet truss. Several years later Terence Riley, curator of the 2011 Shenzhen Hong Kong Bi-city Biennale, commissioned Haim to create a similar project on a larger scale. She developed a new version of the concept in foldable cardboard, and with it, the capacity to democratize the building process.

As designer and creative director for Collective Paper Aesthetics, a Rotterdam-based design initiative launched in 2008, Haim directs a fluid generative process in which teams of builders, as young as age seven, create giant structures by cutting, folding, and connecting simple cardboard forms. Since its inception, the global design initiative has spread rapidly and includes commissioned projects at the Tate Modern in London, National Gallery Singapore, and Museum of Modern and Contemporary Art in Strasbourg, art- and science-based public education programs, pop-up placemaking events at museums and architecture festivals, and play displays at retail stores such as Diesel Kid.

The most intriguing aspect of Haim’s work may be the open-ended spontaneity of her approach, which often invites children and caregivers into the creative process to shape the direction of large-scale, inhabitable works. Recently, we had the pleasure to speak with her about her work, design process, and current efforts to build outdoor playgrounds as well as educational temporary structures based on her geometric designs. 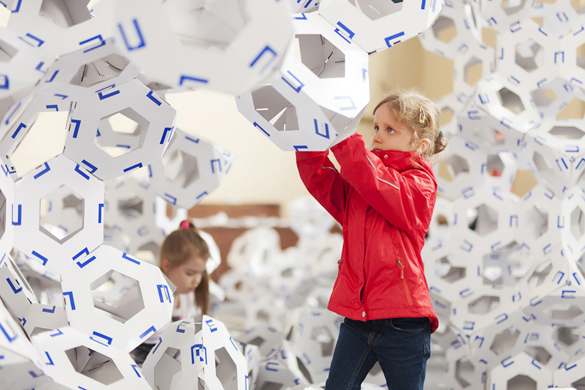 How did you start Collective Paper Aesthetics?

Like many architects in Rotterdam at that time, around 2008, I was laid off. I left a position at Altoon + Porter Architects (now Sitr), where I had worked on schematic design for urban development and retail in Turkey, Thailand, and Spain and on design development for Nieuwe Hoog Catharijne in Utrecht, Netherlands—a shopping, entertainment, and transportation hub in the old city fabric.

Really, the decision stemmed from two things. First, the type of working experience I had was disconnected from reality. I worked on many large-scale projects that were never realized and participated in design competitions. It was fun and creative, but the projects weren’t on a stage. I’d been working for four years, building nothing. The painful joke was that I was a “paper architect.” I’d create A3-A4 (paper size in Europe) booklets for clients, but I didn’t experience in person, nor train, in how a window was connected to a wall. I had a slight idea; I could draw this. But I never realized these things.

The crisis came two months later. There was no more demand for what I was doing before. Then, I got lucky, I received questions to action from the Amsterdam Centre for Architecture (ARCAM) for a museum night in Amsterdam, and my biggest commission ever, a week-long design festival in Germany. I stood in IMM Cologne with a laser cut printer, cutting collected waste material from printing places—catalogs, visiting cards—into entertainment boxes. That’s where cardboard first came in. Later, in 2011, Terence Riley, asked if I could do something like what I had done at the London Festival of Architecture, same principle and geometry, but bigger. It was a lot of luck. I’m not sure we could have done something similar with the same budget in Europe, but in China it was possible. 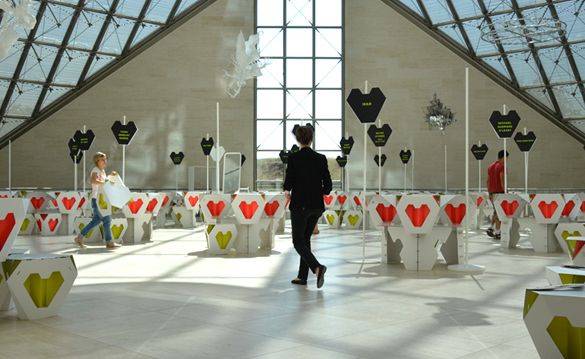 Can you tell us about the design process behind Collective Paper Aesthetics?

Collective Paper Aesthetics is designer initiated. Every project has a different group of professionals who execute it. The idea is that art is formed by the collective. It is a statement about the design world. People often look at something as beautiful or not beautiful, with a quickly formed, judgmental attitude. But when an object is built by people the meaning of beauty is differentiated; there is a power to a STEAM [science, technology, engineering, art, and mathematics] project, in which children learn math and geometry from building the structure; this is beauty in a different sense, not because someone deems it that way, like an object of desire— a chair, lamp, or window—but an accretion of beauty connected with the desire to make something. 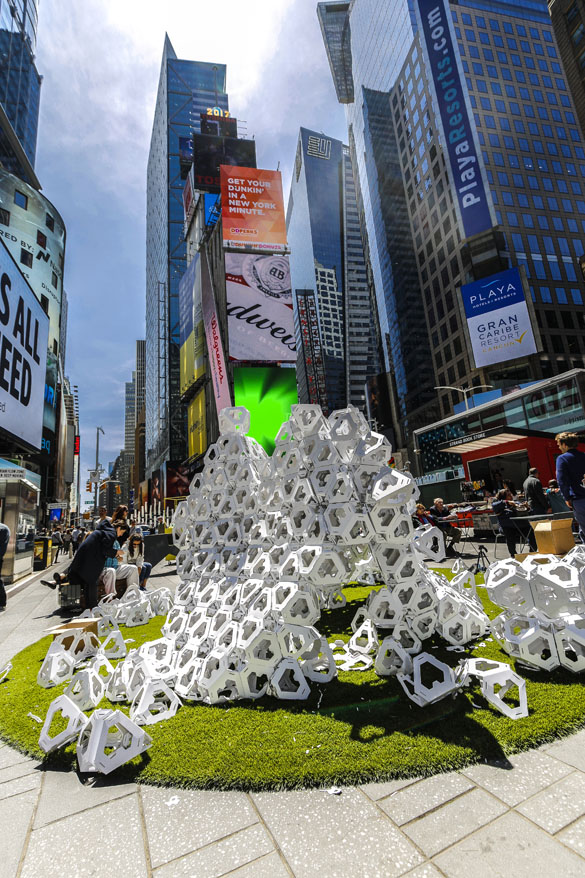 Your Heart Board Pyramid project uses modular systems as the basis for creating kid’s furnishings and pop-up play spaces made of cardboard. As they build models, children work with their hands to engage with concepts in math, engineering, architecture, and art. Can you tell us more about how you orchestrate these public events?

To begin with, it’s important to have a model to help people understand how the process works. If people arrive in a space and the materials are arranged in a flat manner, people may make one cardboard triangle and leave. But if they see a structure they understand the logic. Sometimes we work together with a museum to build a structure. Children ages 7-14 will form the basic shapes, and then older children, ages 14-17, will come in later in the day to link them together into larger structures. Every event is very well planned, designed for the space and the organization. And we incorporate the museum’s education staff as well as visitors ideas; that’s the best way to learn. Alone in the studio, with one cube, I never have as many as ideas as when I introduce a concept to the public and let them experiment. 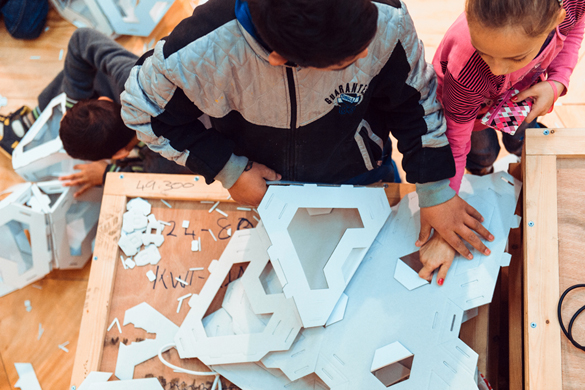 Heart component pieces at youth building event | courtesy Noa HaimYou’ve already taken your concept to museums, architectural festivals, and retail stores. Do you see potential for these structures at playgrounds?

I’ve been really happy to realize the design in durable materials that are a better match for use at a playscape. I have relationships with a few companies interested in pursuing the idea, including a French company, Tôlerie Forézienne, that produces urban furnishings. We now have an aluminum prototype developed by Joel Lemoine, and we’re looking for the right playscape to implement it.

What are the next steps for Collective Papers Aesthetics?

As a designer, you must always be expanding outward. I’d like to introduce more variation in the models, new geometries. I’d also like to see Heart Board Pyramid move into classrooms and education systems.  Until now, it has mainly appeared at cultural events and festivals. But we were recently selected as one of ten finalists in a design competition at South by Southwest Education Conference and Festival, in Austin, in the Learning by Design category and see a lot of potential for the project in STEAM education programs. We’re in talks with education ministries in several countries to expand the project.