China is believed to have led the way on the development of multigenerational playgrounds, adopting a national law that resulted in a nationwide physical fitness program geared for elderly citizens. The idea took hold quickly. After spreading across Asia and Europe (Spain has more than 600 models), playgrounds for seniors began popping up in the United States, taking on an intergenerational focus. They first appeared in cities such as Tampa, Portland, Boston, Washington D.C., San Diego, often in economically challenged neighborhoods or areas where retirement centers were close to subdivisions.

Designs vary widely but tend to include walking trails, wheel-chair accessibility, interactive play structures, and, in many cases, low-impact fitness equipment — ellipticals, static bikes, body flexors — that promote muscle strength and cardiovascular activity. At the heart of many intergenerational playgrounds, particularly those in the United States, is the social aspect of children working intimately with caregivers, parents, older children, and grandparents as they gain confidence and coordination.

Because it is such a young field, it is difficult to find an authoritative set of guidelines for designing intergenerational playgrounds; in fact, design protocols are still being written. With that said, a number of good models have emerged, several of which are captured here.

The Rotary Play Garden
The Centennial legacy project for the Rotary Club of San Jose — the Rotary PlayGarden at Guadalupe River Park strives to create an inclusive environment to create a play environment for children and adults of all abilities. The design by PGAdesign includes an earthen mound outfitted with embankment slides and equipment for swinging, spinning, and climbing. Notable are Goric’s surface-level merry-go-round and a rocking toy with a hammock-like bed called The Nest, each of which enable wheelchair users to participate in the play. Or children can animate the spinning and rocking motion themselves. 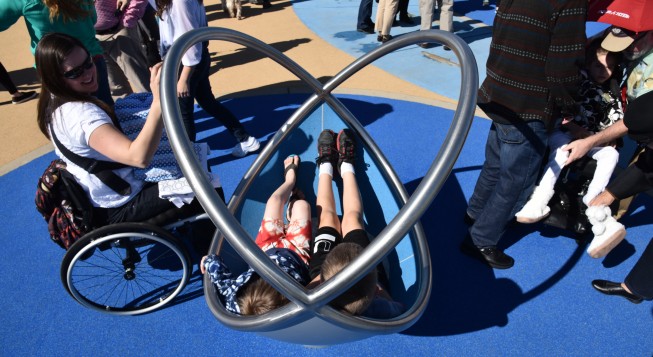 John Prince Park
Palm Beach County, working with nonprofits The Trust for Public Land and Quantum Foundation, recently built a Fitness Zone in Lake Worth’s John Prince Park. A covered pavilion includes 17 pieces of resistance exercise equipment, each clearly marked with instructions for use. Most are wheelchair accessible. The center is largely geared for adults, featuring parallel bars, a chess press, a lat pull down, elliptical machines, a leg press, pull up bars, a self-weighted rower, and a ski walker.

The Alexander Kemp Playground
Sand and water are not age-specific pleasures, which may be why the Kemp playground in Cambridge, Massachusetts has become one of the most widely used in the city. The design by the city’s landscape architect Robert Steck integrates Goric’s Water Play system E, sand accessories, and a custom-built boat installation to stimulate the imaginations of children and their caregivers. The Rodeo seesaw, a Farm pump, and the Integration Carousel complete a fluid design with enough variety to keep children engaged as they challenge their fine motor skills and learn about weight, measurement, and gravity.

The KABOOM/Humana Partnership
Community involvement and funding are integral to making intergenerational playgrounds successful. In 2012, Humana, one of the nation’s leading health care companies, forged a three-year partnership with the nonprofit KABOOM to build playgrounds in underprivileged communities across the country. The partnership represented a $6 million investment by Humana and The Humana Foundation and has led to more than 50 multigenerational playgrounds across the county in cities such as Cleveland, Tampa, and Orlando.

Marion Diehl Park
Marion Diehl Park, outside of Charlotte, North Carolina, began as a partnership between Mecklenburg County’s park and recreation department and the nonprofit Southminster retirement community. The multigenerational playground features equipment by Kompan Playgrounds, including an electronic climbing game in which children react to flashing lights and a giant rope-climb with several levels that challenge a child’s self-confidence. For the older users, the playground offers a set of outdoor cardio and resistance machines by The Great Outdoor Gym Company of England. The park is built with a walking track on a cushioned rubber surface for ailing bones and children who fall. 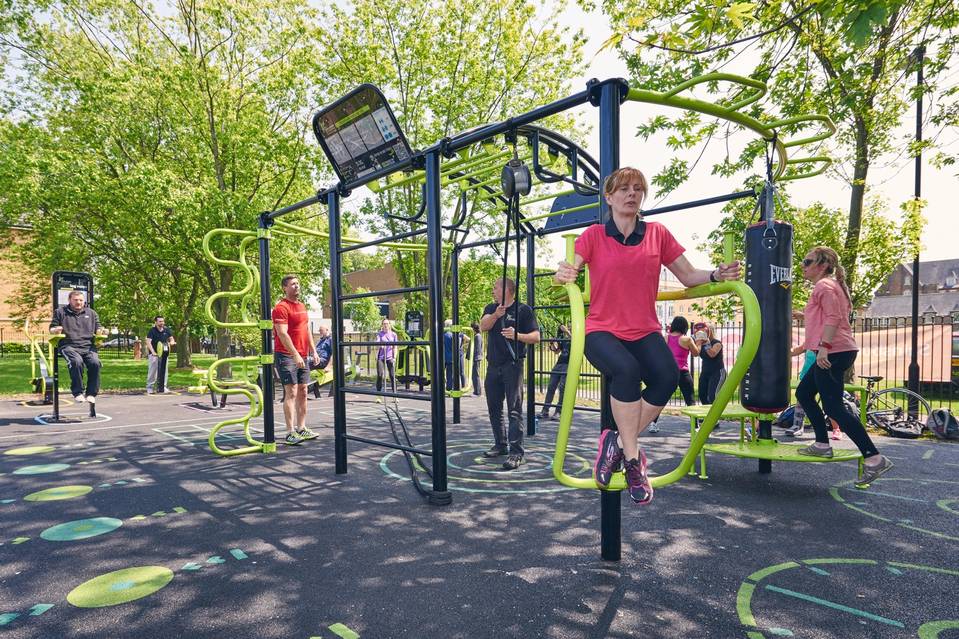 Physical and Emotional Benefits
In an interview with the Charlotte Observer, Jim Garges, the city’s director of park and recreation, summed up the idea behind intergenerational playground design well. “The whole theory is that you just don’t bring your child to the playground and sit on the bench,” Garges said. “A lot of adults and children don’t have an opportunity to go to a gym,” he said. “So this outdoor recreation equipment is accessible to all.”

But the benefits of intergenerational playgrounds go far beyond fitness. As Julie Schmidt, assistant professor of sociology at Queens University, notes in an article in the Atlanta Journal Constitution, cross generational play carries psychological benefits for young and old. “For children, seeing elders in active, social environments can help reduce the fear and break down negative stereotypes of the aging process,” said Schmidt. “For older adults, social support is beneficial in enhancing self-esteem, well-being, and can reduce symptoms of depression.”

Then there’s the fact that families today are often more geographically dispersed than in previous generations. This is yet another reason to encourage the creation of safe public venues where members of different generations can play together and share experiences. I know how deeply my son relishes opportunities to play with his grandparents when they visit Chicago from their homes in Columbus, Ohio and Ft. Collins, Colorado. And, to my mind at least, that is not because they spoil him. It’s because they’ve lived rich lives and have wisdom to share.