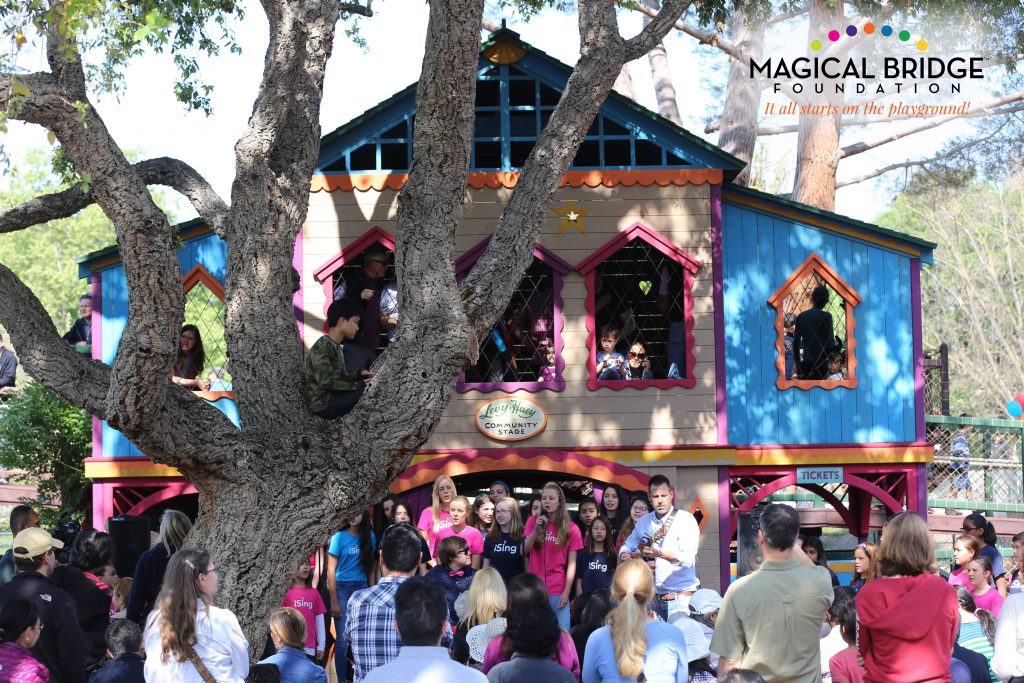 It was after the birth of her second daughter, developmentally disabled Ava, that Olenka Villarreal discovered how isolating a playground could be.

The 34 playgrounds in Palo Alto, California where she lived were all ADA-complaint, but to Villarreal accessibility was not the same as usability.

Her quest for a place where Ava and children of all ability levels could play on equal terms, where abled and differently-

abled adults could share in the play, led her to found Magical Bridge Playground.

Seven years in the making, the unique playground in the heart of Silicon Valley became an instant hit after its opening in April 2015. So successful has it become, that communities began clamoring for Magical Bridge playgrounds of their own.

That’s why the Magical Bridge Foundation was founded. Born of the determination of one woman to create a place where children of all abilities and the people who care about them could play together, the foundation today is helping to change our understanding of what a playground should be.

“We’re beyond just a playground,” explains Jill Asher, who co-founded the foundation with Villarreal and is its executive director. “We are not a disabled playground. We are a playground that meets the needs of absolutely everyone at every stage of life.”

“We are talking with communities all over the country and actually all over the world about bringing a Magical Bridge to their community,” says Asher, observing that the foundation gets “hundreds of requests a month.”

New York City is said to have constructed the first playground in the country for children of all ability levels. Los Angeles opened the first inclusive and accessible playground on the West Coast in 2000. Others have since followed nationwide.

In that way Magical Bridge is a brand, a type of playground recognizable as much by the intergenerational engagement of its visitors and the events it promotes, as by the nature of the colors and design.

Each Magical Bridge playground is standardized, Asher notes, with seven play zones such as a slide area, swing area and stage, as well as cocoon-like retreat areas where the overwhelmed can rest and regroup. There will be small differences from park to park as a result of community input and interests. “But at the end of the day,” she adds, “It’s a Magical Bridge design.”

The foundation’s bellwether is the Magical Bridge Playground in Palo Alto. Opened in 2015 in the heart of California’s Silicon Valley, the playground attracts families throughout the San Francisco Bay Area and professionals from all over the world.

The latter come to learn how to design inclusive play areas that work for children of all abilities and provide for adults who may have special needs of their own. They leave with an understanding of how a playground can also become a potent community connector.

“We really say that we’re the town new hub for the 21st century,” Asher says. “It’s the new hub and meeting place for everyone to come to.”

Every community that wants a Magical Bridge playground must commit to providing regular events on the stage, which is a key feature of every playground design. Typically, Asher explains, a community group will manage the events and programs, such as the Kindness Ambassador volunteers who monitor the playground welcoming visitors.

“If you just open a playground and that’s it you really don’t receive the full benefits of everything Magical Bridge has to offer,” she says.

“We really only want to work with cities or communities that are committed to inclusion and acceptance and kindness for everyone in their community.”

As interest grows in the Magical Bridge brand of playground, the foundation is looking for ways to accommodate the needs of communities that don’t have the resources of Silicon Valley’s cities. The $4 million it cost to build the first Magical Bridge playground is daunting, so Asher says the foundation is studying ways to bring down the cost. One possibility is downsizing.

The foundation also wants to spread its philosophy of inclusiveness and kindness and engagement to the schools. Student groups already visit the Palo Alto playground to witness inclusiveness and equality in action. Now, Asher says, the foundation is working with schools to develop playgrounds that still embody the Magical Bridge approach, but which will be cheaper to build.

Ultimately, Asher says, the hope is that playgrounds won’t be celebrated because they are “inclusive.”

As Villarreal says on the Foundation’s website: “Our dream is that we no longer have to use the words, ‘inclusive’ or ‘accessible’ when building something as vital as a playground.”