Several weeks ago, we caught up with Angelica Rockquemore for a designer profile. Our conversation was illuminating and brought to light an emerging area of interest in the field: how parks and playspaces can serve to deepen cultural and environmental understanding and lay the foundation for the development of broader community health. We thought her Master’s thesis “Grow, Thrive, Be,” which examines outdoor learning spaces in Maori language immersion preschools in New Zealand, was worth a deeper dive, not only for the insight it offers about early childhood learning and play, but the way it translates a distinctive worldview into spatial language.

This led us to consider the recent projects of firms such as Miller Company Landscape Architects and Design Alaska, whose playgrounds grow out of a deep knowledge of the natural world and culturally diverse communities. Here are three key takeaways.

Honor Cultural Traditions in the Use of Materials and Space

In Rocquemore’s explorative study of two early childhood education (ECE) outdoor play environments in New Zealand, she traces the links between the traditions of Maori culture and children’s reverence for the land and sea.

“From the moment that a child is birthed, traditions are invoked. The infant’s whenua (placenta) is delicately placed into the whenua (earth) as a symbolic and active effort to begin fostering a
connection between the child and land. This also symbolizes cyclical relationships with the natural environment, traditions that personifies a link between the past and present. These attitudes of reverence for the natural environment, land and Papatuanuku are important cornerstones for caring for and educating tamariki in Māori world views (Tauwhare, 2014).”

An understanding of these cultural traditions and how they manifest in children’s respect and appreciation for the natural world is evident, according to Rocquemore, in design considerations at the outdoor playground of Te Kōhanga Reo and Motu Kairangi. Rich with wooden materials seen in her photographs – a pipe-organ shaped fence, stump steps at various heights, a dramatic play area, raised vegetable planters, and a softly cushioned rocking chair – the play area is a mirror of the natural world. Curvilinear forms, plants at children’s height, spaces enclosed by dense tree canopies, connective paths, heavy shade, and large open spaces for active play, reflect reverence for nature in a spatial biophilic sense. One of her most interesting observations notes the imaginative way in which the children use objects without a prescribed intention.

“In the eyes of young children, a fallen tree branch is a magic wand, transporting them to a mystical place where the raindrops in the sky are actually made of sugar. A fallen tree branch can be a pencil that a children use to draw shapes and letters in the dirt of the ground.” 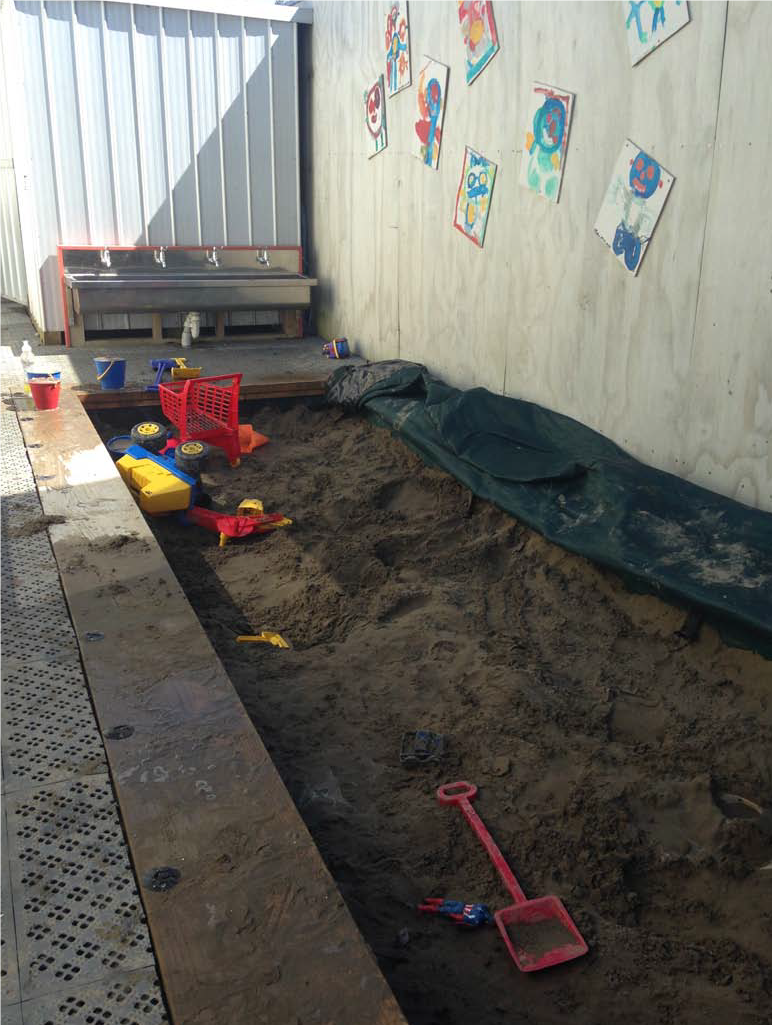 Also enlightening is her description of the way in which natural materials serve to foster social interaction:

“In the Māori worldview, relationships between individuals, groups and larger communities are fundamentally important. These relationships are based upon sharing—sharing knowledge, wisdom and language with the intent to strengthen and support each other. I was surprised to discover that the sandbox was the space that demonstrated sharing and most effectively contributed to the making and strengthening of community.”

Select Climate-Resilient Play Materials
Leaving New Zealand, mentally, to talk to John Rowe, a landscape architect at Design Alaska in Fairbanks, where winter temperature can drop to 40 to 50 degrees below zero, presented an arresting change of scenery. Rowe was gracious enough to take some time out of his day to speak to us about playgrounds in Alaska and, specifically, Pathway Park, a reclamation project the firm is working on in partnership with the Rotary Club of Fairbanks and the Fairbanks/North Star Borough of Parks and Recreation. In a little less than four years, a long, linear peninsula sitting on the banks of the will become home to sand beaches, motorized and non-motorized trails, wooded areas, and a series of small inclusive play areas connected by a pathway.

Children in Alaska are accustomed to the cold, Rowe says, and are generally allowed to play outside at school playgrounds until the temperature drops beneath 20 degrees below zero. These are kids “who will be waiting at a bus stop with a hoodie on and their coat in their arms,” Rowe says. While playgrounds in more remote areas of the state will close for the winter, those near buildings in populated areas remain open year-round, even in the darkest days of winter when there are just a few hours of daylight. Children born and raised in these conditions are hardy and handle the extreme climate conditions quite well, he says. 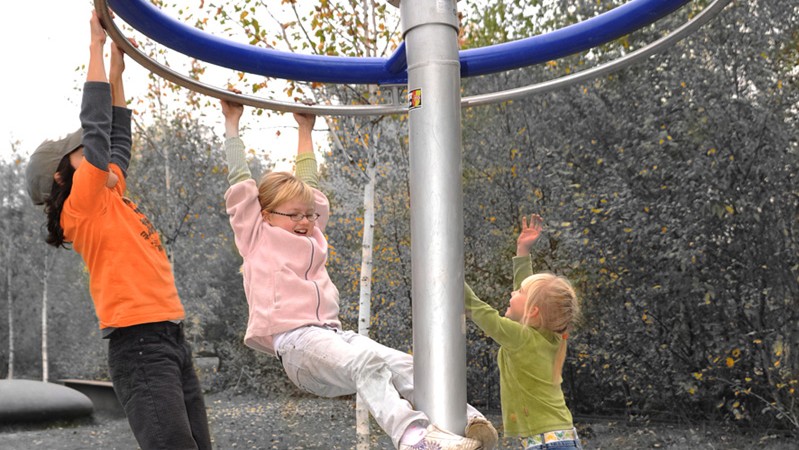 Playground equipment, however, is a different story. Powder-coated play equipment, exposed not only to extreme cold, but 24 hours of sunlight and 90 degree days during June and July, chips and dents. Snow blankets playground equipment low to the ground for much of the year, so tall structures, or wall climbers and nets that don’t hold snow, are used as alternatives. Brightly colored play pieces visible in darkness are another popular choice.

The design plan for Pathway Park, which reflects many of these options, includes a zip line, basket swings, climbing nets, and an Icarus overhead spinner by Goric. The structure caught Rowe’s eye at the ASLA annual meeting and expo. “It’s great because it’s tall and always off the ground in winter. The brushed aluminum withstands extreme weather conditions and is good for longevity. It also can be shipped in, which is important here.”

Listen to the Community
Jeff Miller, principal and founder of Miller Company in San Francisco, is well versed in conversations surrounding equity. The landscape architecture firm’s revitalization of Hilltop Park in 2017 transformed the three-acre park, designed by Michael Painter and Associates in 1979 and situated atop Bayview Hill adjacent to Hunters Point Shipyard, a hub of African American settlement during World War II, from a neglected parcel in disrepair to a thriving park and cultural destination.

Supported by a California state grant and the Trust for Public Land, the restored park integrates a skate park, bi-level playground, modern light arrays, accessible paths, and a restored 70-foot-tall sundial and ampitheater designed by artist Jaques Overhoff. The repainted yellow sundial rising from a raised half-moon of concrete steps is iconic, Miller says, and works in parallel with interpretative signage and a playground surfaced in a celestial pattern and featuring climbing orbs and telescopes, to reflect the cultural interests of the community.

The Trust for Public Land, Bayview neighborhood park advocacy group, and Miller Company held large-scale community meetings and small focus group gatherings to discuss the needs of the neighborhood and bring ideas to the table. “Explorations in astronomy surfaced as an expression of African American culture,” Miller says. Ensuring equity became a central tenet of the improvement project. “The question is ‘how come our park is a mess, and these other parks look so nice?’ But now it’s a cool park that’s quiet and respected.” 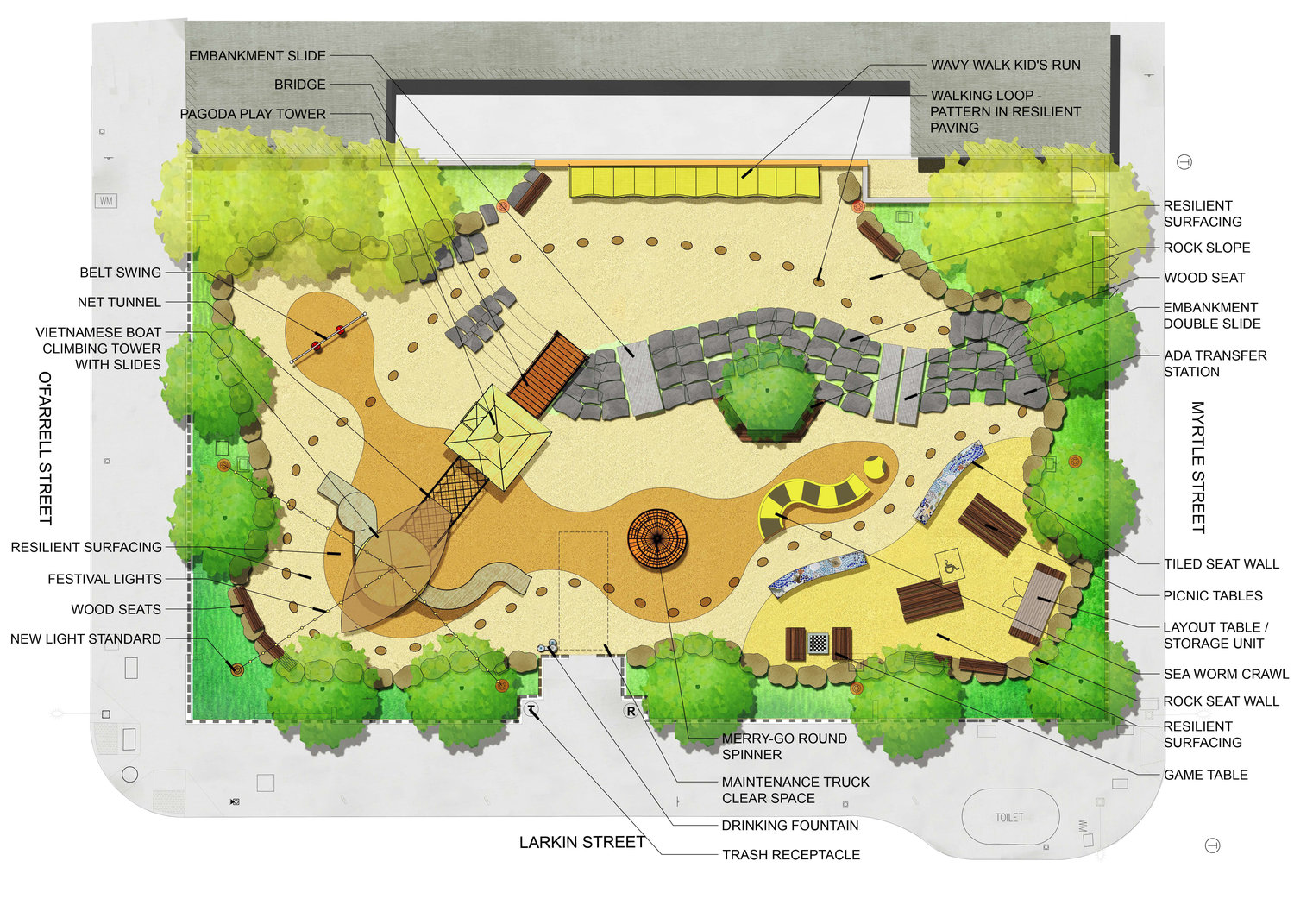 More recently, Miller’s attention has turned to a park improvement project in San Francisco’s Little Saigon, a high density, diverse neighborhood in the heart of the Tenderloin with a large Southeast Asian population and many families with young children. Sgt. Macaulay Park, which opened in 1983 in honor of John Macaulay, a police officer who was shot and killed in line of duty, received its last upgrade in 2000. The planned renovation is being funded through the 2012 Clean and Safe Neighborhood Parks Bond – Let’s Play SF program.

Miller Company has been working closely with the San Francisco Recreation and Parks Department, Trust For Public Land, San Francisco Parks Alliance and Saint Francis Foundation to create a multigenerational park with a nature-inspired theme. The involvement of community groups, including La Voz Latina, Faithful Fools, and Bay Area Women & Children Center, along with residents of the Little Saigon neighborhood, has been incredibly instructive, Miller says.

Three concepts have been developed for the playground: a giant dragon that moves throughout the space and includes a slide and tunnel, a rocky shoreline, and a pair of towers. The community supported the shoreline concept, with the addition of a Vietnamese-style boat, and Miller Company has prepared construction documents and cost estimates. Current plans are for the boat to be custom built by Goric. A giant climbable frame with rigging, ladders, planks, and a pagoda tower will be sited at an incline against a rocky embankment. The boat will appear to have run ashore and provide distant views from the stern. Miller Company sought out Goric for the project after an earlier collaboration on customized embankment slides at Lafayette Park Playground.

Focus groups and stakeholder meetings organized by the Trust for Public Land have been important in revealing the equity issues at stake, Miller says. Also brought to light in these meetings are important cultural and caregiving considerations, such as the desire for sitting areas for parents and grandparents to relax, the wish for festival-themed lights, and the demand for an onsite bathroom easily accessible for young children who are going though toilet training. “The bathroom is an interesting issue in terms of the larger equity issues surrounding the parks. If you live in a wealthier neighborhood, you don’t have a problem getting a bathroom in a park. In this case, it’s more difficult.”