If there are seasons of life, there are also months and weeks. So, if I’m now entering life’s early autumn, the more precise time I am currently living through might be termed the birthday party years. Just about once a month, my wife and I travel with my son and daughter to a high-octane indoor playground to partake in the trappings of the occasion: pizza, cake, singing, party games, pinatas, goody bags, and, of course, the main attraction: a gym full of inflatable houses or some combination of skillfully engineered climbing and bouncing equipment.

To anyone who has set foot in one of these places, it’s easy to see their appeal to children. Little ones are free to run and jump and climb and spin. Rules, to the extent they’re socially enforced, are looser than in a classroom, or even most outdoor playgrounds. And save a few bumped knees or cake-induced sugar crashes, the kids are clearly having fun. If I make the mistake of trying to intercede, for a moment, to coerce my son into the social graces of, say, wishing the host a happy birthday, his eyes skirt past me with delirious intensity, transfixed on the next thirty-foot foot slide, castle, or sea of foam.

For parents, too, especially those who live in cold northern cities where an outdoor park is untenable for many months of the year, indoor gyms can be a blessing, especially when it comes to planning a birthday party. They are big, all-inclusive, and fun. Supervised high-energy spaces that entertain and exhaust children, while allowing parents a modest break from vigilance. 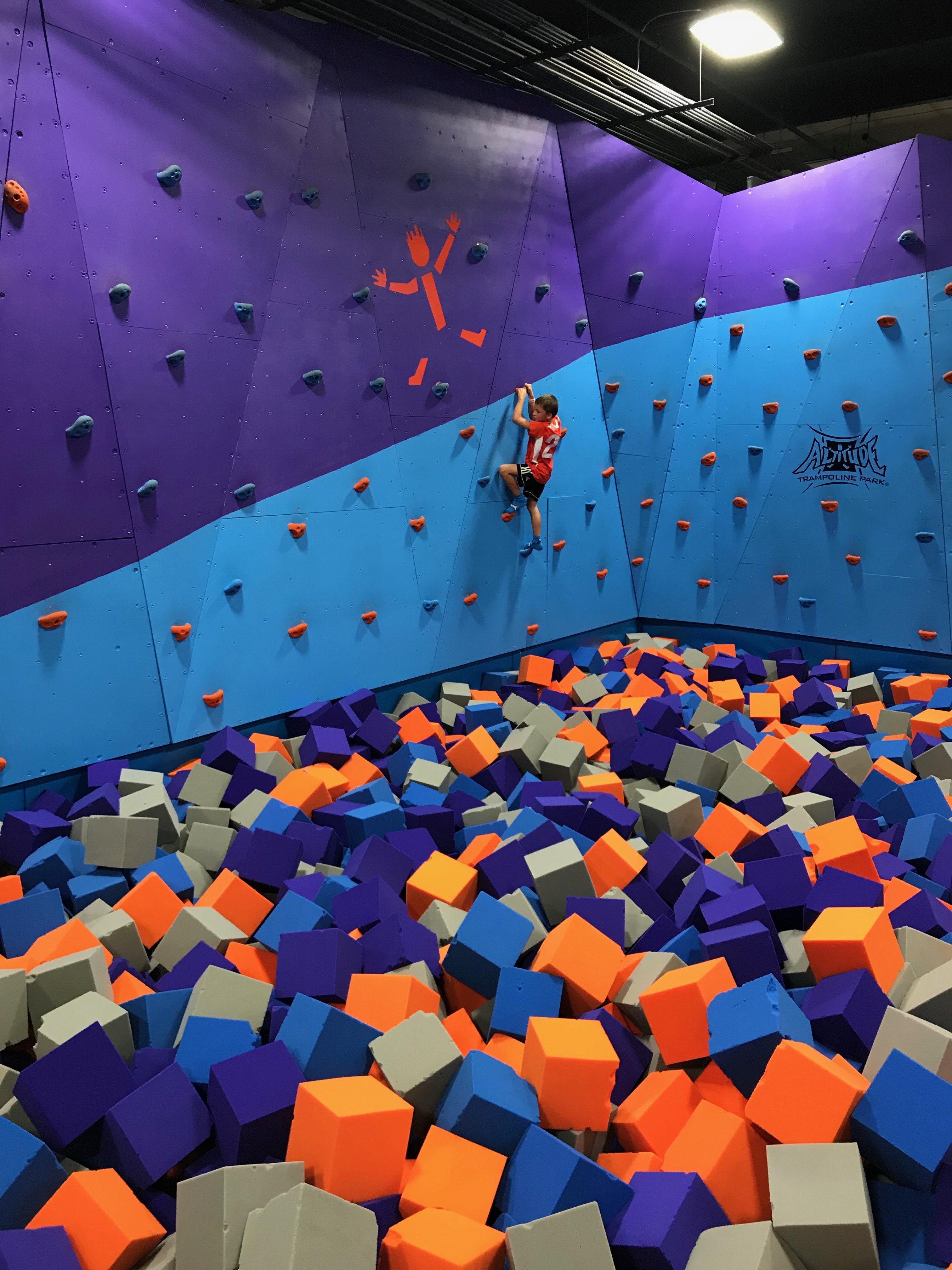 This past weekend, the indoor playground du jour was Altitude Trampoline Park in Skokie, Illinois, about 20 minutes outside Chicago. It was the fifth birthday of the son of one of our adult friends,  not someone my son knew well, but a boy whose dancing skills and superhero T-shirts my wife and I have admired remotely from Facebook. Birthday parties, for our family, often fit this bill, hosted either by a parent in my son’s preschool class,  or a close friend in our adult social circle.

Social etiquette on Chicago’s northside, which I imagine is not so different from that of second and third-wave gentrified neighborhoods in other large cities, calls for inviting everyone in the class. But that expectation puts considerable pressure—managerial, social, financial, and otherwise—on parents. These are big, catered events, stressful to plan. There are invitations to send, venues to book, goody bags to prepare, younger siblings to account for, health and dietary restrictions to consider. Many times, the day of the birthday, I see parents visibly sweating with anxiety.

That’s probably one of the reasons Altitude Trampoline Park, a company founded in 2012 in San Antonio and self-described on its website as “the fastest growing trampoline park company in the world,” is packed on any given weekend. With more than 100 U.S. locations open or soon-to open, and over a dozen internationally, the company is quickly making a name for itself in the world of play. And they don’t appear to be slowing down any time soon. On the landing page of Altitude Skokie website, there’s a link where you can apply to start your own franchise; they’re hiring court monitors, party hosts, store managers, and team leads.

The cost is not unreasonable by Chicago standards, where a trip to the Shedd Aquarium can set a family of four back close to $100. A birthday party at Altitude Skokie costs $270 for 10 guests, which includes two hours of full-access jump time, a personal party host for set-up and clean up, balloons, two large pizzas, and a free T-shirt for the birthday boy or girl. When you consider what it would cost to feed and entertain 10 four-to-five year olds for two hours in any other setting, it starts to make even more sense. 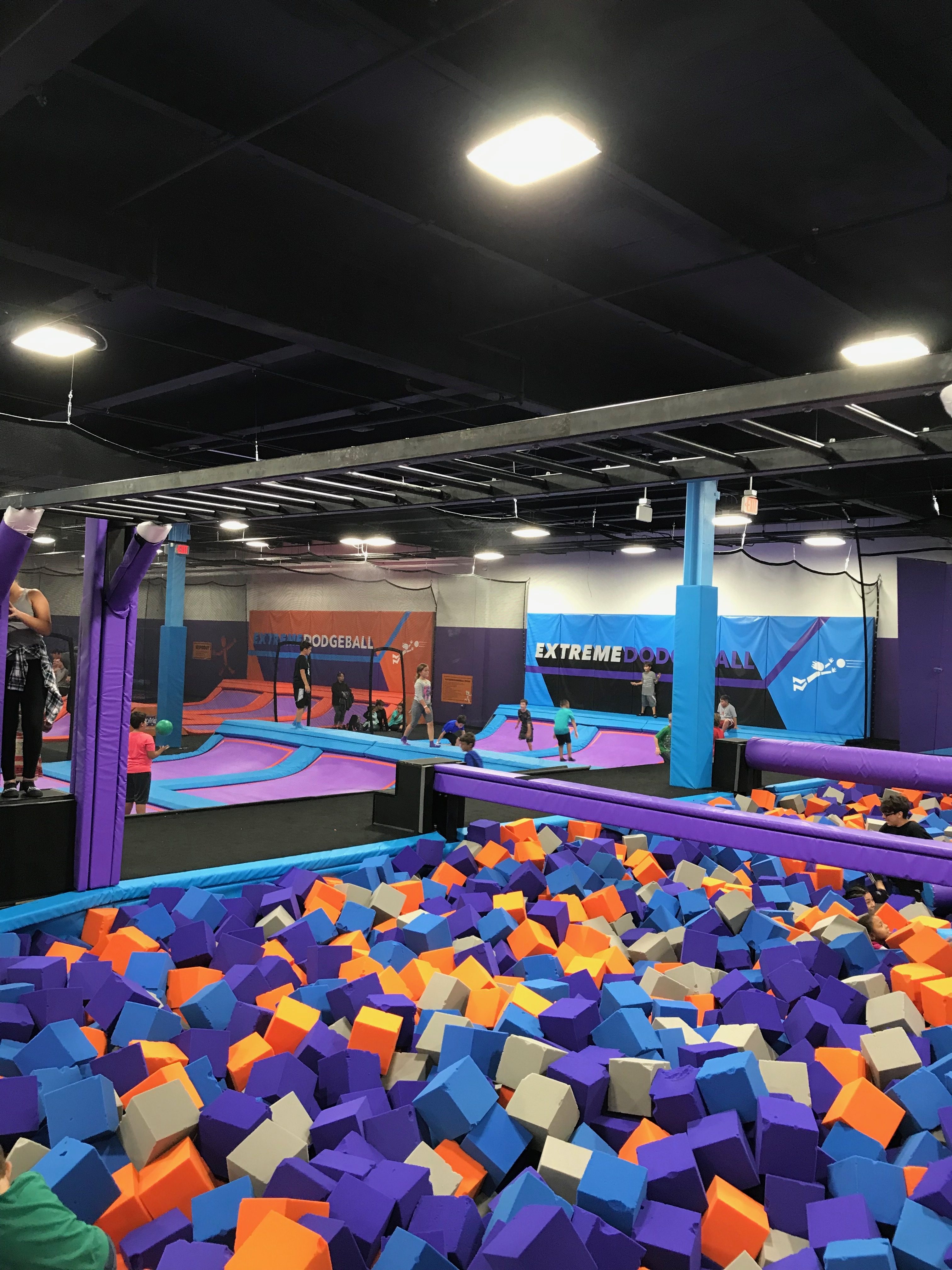 The place is unquestionably fun. A warehouse the size of a Best Buy houses wall-to-wall trampolines, whose springs are cleverly concealed beneath safety padding. There’s an Extreme Dodgeball Court with trampolines that curve upward like a skateboard half-pipe, a trampoline-powered basketball court, interactive light games, a zip line, an indoor climbing wall, a pit filled with 15,000 foam cubes, a rolling tube where kids swing log-sized pugil sticks at one another, a giant spinning propeller called Wipeout that children jump and dodge to avoid getting knocked down.

Outside the jumping zone, there are enclosed dining rooms; an open area with picnic style benches, leather couches, and massage chairs. It’s a comfortable space to relax and eat.

Once inside, I initialed an extensive electronic waiver,. The reminder of the risk of injury, emotional distress, and death that trampolines have been known to caused was, admittedly, not the most cheerful way to start a birthday party. On the other hand, the parent company’s thorough and diligent protection against applicable tort law is probably a major reason children have the freedom to jump five and six feet into the air and do back flips.

After signing the waiver, we stood in a second line to get our socks: a cotton athletic variety with thin rubber treads for jumping. The sales associate asked if I wanted to jump. “Is that customary?” I asked, genuinely surprised this was even an option. “Do most adults jump?” “No,” she said frankly.  In retrospect, I wish I had given it a chance; Another friend told me, after the fact, he went to an office team-building retreat at Altitude Skokie and jumped for hours. Next time, I’ll be more daring.

Competition in the indoor gym market is stiff and growing. Here in Chicago you have Sky Zone, self-advertised as the world’s first indoor trampoline park,  and several indoor play spaces, such as Pump It Up and Jump!Zone, designed for children’s parties. The International Association of Trampoline Parks, founded in 2012, advocates for members around the world and hosts an annual trade show and conference. The association’s board represents names like House of Air, Rockin’ Jump, AZ Air Time, AirHop, Sky High Sports, Jumpstreet, Freedome Parks, and their growing reach and capacity suggests the emerging industry is taking root in a real way.

I know these places are good for city kids who need more places to exercise, take risks, and have fun. But if I’m being honest, I have mixed feelings about them. I like being around people and crowded spaces, even if I don’t always advertise it in my demeanor. But even for closet extroverts like me, people who like loud noise and crowds, these giant indoor gyms require some recovery time. On this particular Saturday, the song booming through the speakers as we left was Icona Pop’s “I love it,” whose anthemic chorus, “I want to crash my car into a bridge, I don’t care. I love it. I don’t care,” is, above all, an exuberant battlecry for the recklessness of youth.

I guess I’m not so reckless and young anymore. There’s undoubtedly something small and intimate I miss about the birthdays I remember from my own childhood. Blowing out candles in a cozy dining room surrounded by relatives and close friends. Playing pin the tail on the donkey. Building snow forts or chasing my friends around the backyard. But this birthday party wasn’t for me, or even the four-year-old me who grew up in the suburbs and liked to bury his friends’ iegs in the snow and drink hot chocolate and marshmallows. As my wife reminds me, wisely, “The look on his face makes all this worth it.”  And, of course, she’s right.