This week we feature a guest blog from the Dutch design firm Carve, a case study in which the authors describe the design of a challenging, architecturally stunning playground developed in Istanbul, Turkey in collaboration with London-based WATG landscape architects. We’re enamored with the two stacked cubic towers—gorgeous structures that hang in suspension like a skewed set of children’s building blocks. We hope you are as impressed as we are with this exciting project from one of our long-time partners.

Zorlu Center, Istanbul: A Case Study
Near the end of 2012, Carve was contacted by the London branch of WATG landscape architects requesting whether Carve would be interested in collaborating on the largest playground development in Istanbul.

Carve is a design and engineering studio based in Amsterdam, focusing on the design and development of public spaces throughout Europe and Asia, particularly for use by children and young people. Carve’s leading motive is to create space for play and to foster possibilities, seeing playgrounds as an integral part of public space. Over the past seventeen years Carve has grown into a company within which several design disciplines meet, from industrial design to landscape architecture.

Based on our reference projects, Carve was chosen to further develop the playground concept and the design of the 1600 square meter site. The existing concept was based on two separate yet closely related areas, defined by the topography of the park. The explicit wish was to add a sense of exploration and discovery, and design large custom-designed play element that would draw kids into the area. 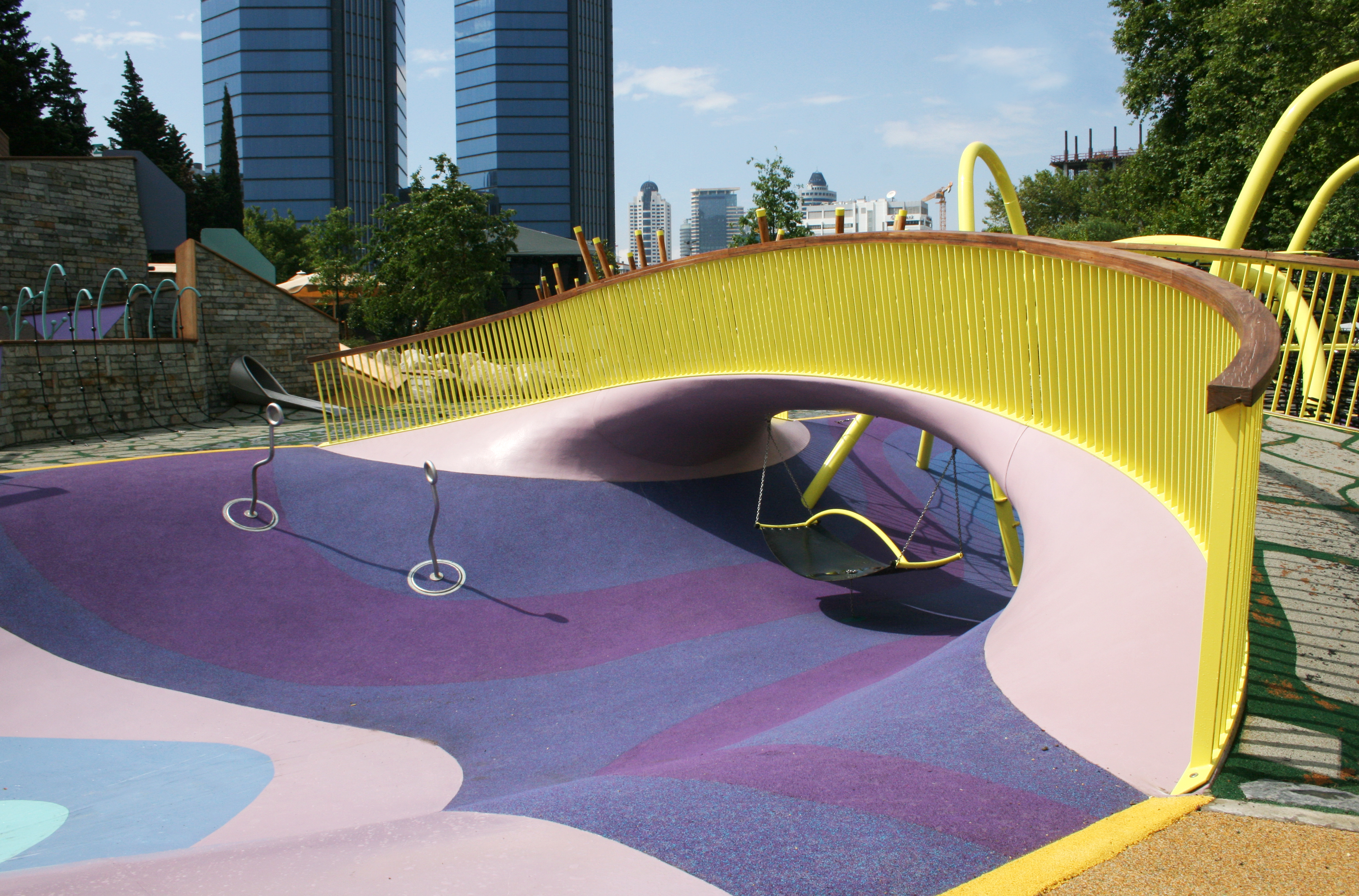 Starting point of the design
The starting point for Carve’s design was that we wanted children to be able to completely dive into their own world of imagination: stimulated by otherworldly shapes, colors and an unprecedented play experience. It should be a playground visible from afar, yet a world in its own right. This resulted in a playground that is truly one of a kind: everything, from concept to layout, from play equipment to landscaping, was designed specifically for the Zorlu playground. With this, Zorlu Center offers a unique chance to create a backdrop for unforgettable play experiences.

The playground consists of various zones and changes its look: from low, bright and colorful at the entrance zone it gradually transforms into a more adventurous, high and natural looking play environment. Within this gradient, the playground is divided into different ‘worlds’, who all have their very own character. While the parents are sitting on the neighboring terrace or the elongated bench that embraces the playground, children can safely explore the whole playground on their own. The entrance area is dedicated to young children, with gentle hills to climb on, slide down and explore. On these hills, capricious playshapes host numerous play elements for the smaller children, like trampolines, spinners, climbing nets, hammocks and a slide. The wavy shapes of the hills reflect the shape of the neighboring water playground. In the wooden poles lighting elements are integrated. 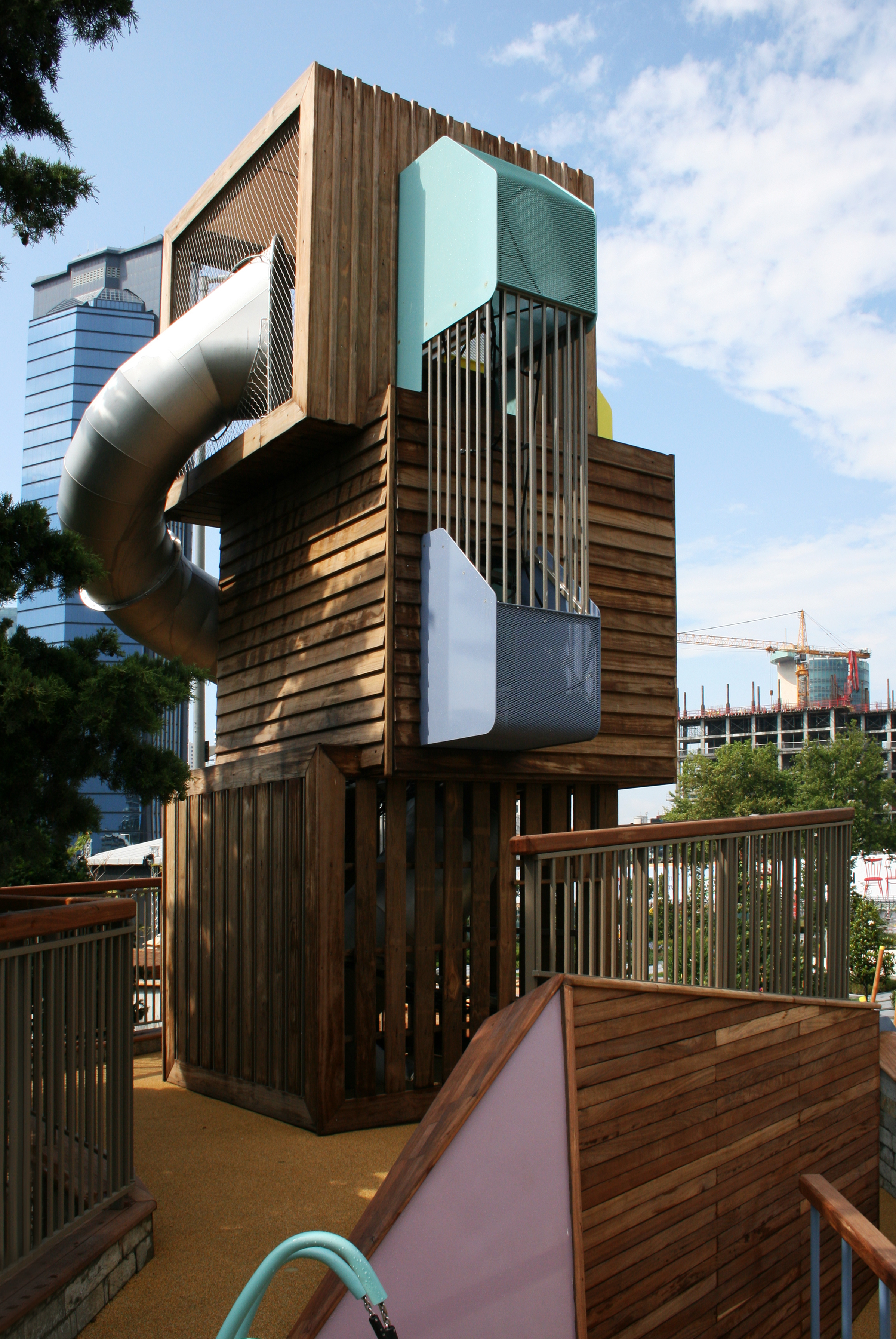 Two towers
On top of all this, the playground contains two towers from which you can overlook the whole playground. They differ in size and ability level, but are unmistakably part of one “family.” Transparent and non-transparent routes offer an endless amount of possibilities to go up. They are made of large stacked cubics cladded with wooden slabs. The three-story tower sits on the highest part of the playground and contains a long slide which only can be reached by climbing up the mountain range. The slide dives partly underground, covered by the hill – within seconds, children can slide down to the heart of the playground. The “birds nests” that are part of the mountain landscape are also integrated in the towers. They function as hidden lookouts; children can climb in there and hover above the ground. The second, four-story high tower is equally transparent and also has an interior which is focused on climbing, hiding, and lounging. Deep valleys, a bridge and a giant slide

Moving towards the heart of the playground, the hills turn into valleys. Here, a hidden world can be explored: a bridge, giant netting structure and a giant family slide, ready to be used by a whole bunch of children at the same time. The site is embraced by a natural landform, keeping children safe in the play area. The climbing nets and family slide are the eye-catcher of the playground; brightly colored and visible from afar, this zone stimulates the adventurous and explorative nature of children of all ages. 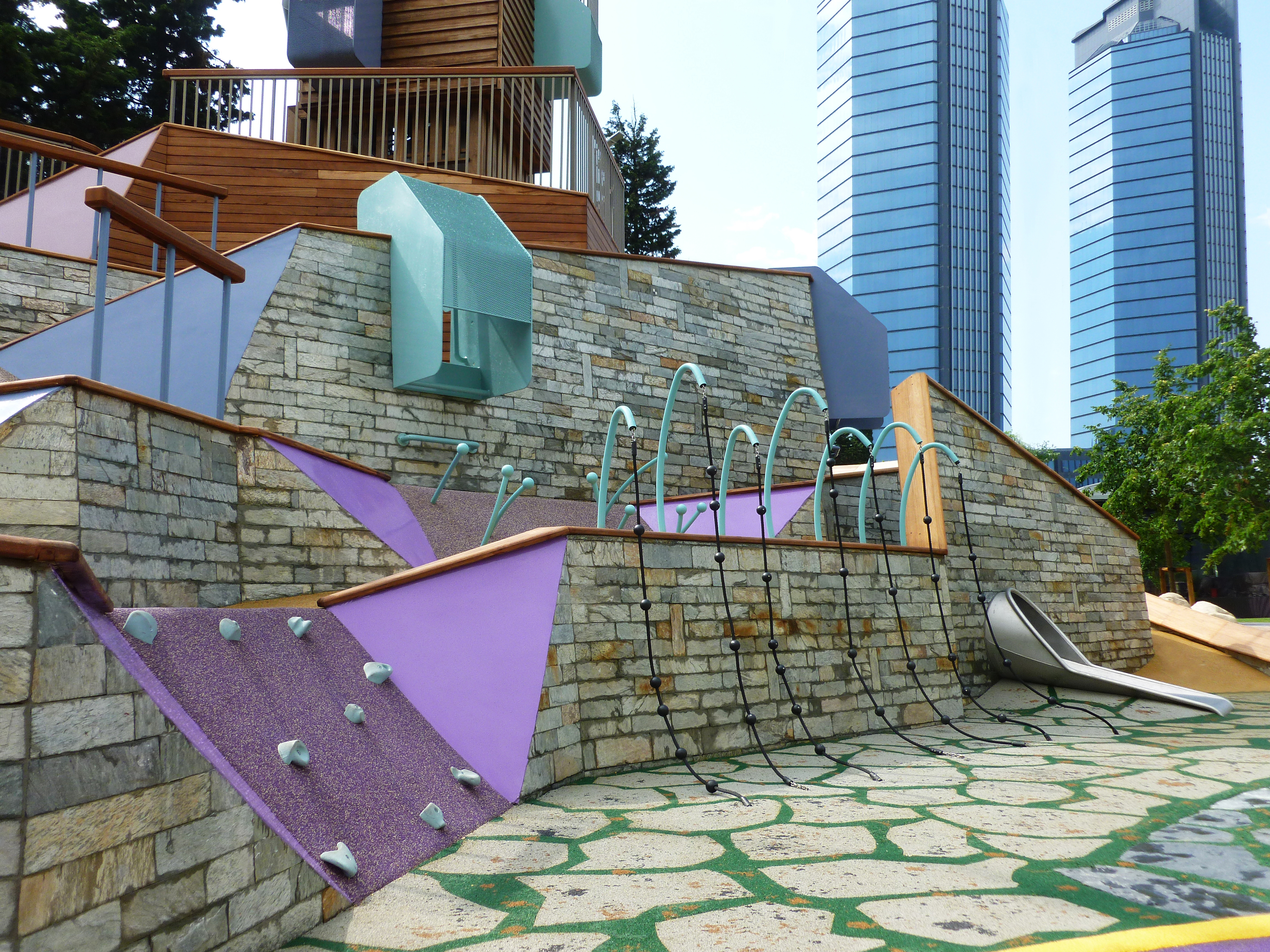 Mountain range coulisse
The deep valleys are embraced by a “mountain range.” Several rows of walls contain an endless amount of play possibilities, from climbing, running, hiding, sliding and crawling to playing hide and seek and diving into a completely other world, overlooking the rest of the playground. Together these walls act like a giant coulisse, which changes shape depending on one’s angle. It is an adventure to play here: a labyrinthic system of tunnels, sliding walls, “birds nests” and lookout points and narrow alleys. Once you’re inside the mountain, there are numerous ways to get up to the highest point. The giant slide from the valley-landscape crawls up the hill, connecting both parts of the playground. In a roller coaster slide of seconds, you’re in the heart of the playground again.

Imagination and playful temptation
The Zorlu stands out in the way it was planned: in a very short time span, the project was designed, engineered, and built. Thanks to all parties involved, the Zorlu Playground surpasses all expectations; it is more colorful, dense, and challenging than one could have imagined. But most importantly, it succeeds in merging two important design themes. First of all, it is a playground in which children completely can dive into an imaginative world, while secondly, seen from the outside and despite its colors and unusual shapes, it merges beautifully with the surrounding landscape.