Jared Diamond, an American scientist known for popular science books, such as Guns, Germs, and Steel and The World Until Yesterday, gave an interesting 2013 TedTalk concerning the wide differences in how societies regard senior citizens. As he mentions in the talk, one way these differences are manifest is in filial patterns and living arrangements. For example, about ¾ of elderly Japanese parents live with their adult children, a pattern replicated in Korea and China, but very different than what we see in the United States. The perceived value of seniors is also embedded in language. The Hawaiian word kūpuna means elders and implies knowledge and expertise, while the suffix –san– in Japanese, signifies the nation’s deep respect for the old. Dietary practices, senior care, and end-of-life decisions are similarly diverse across cultures, and as Diamond explains in The World Until Yesterday, have broad implications when it comes to seniors’ physical and mental longevity.

A recent piece in the New York Times reports that the residents of the Greek island of Ikaria are four times more likely than their American counterparts to live to 90. Its residents maintain a relaxed lifestyle. They eat Kalamata olives, drink tea, and swim in the Mediterranean. All of this, of course, leads me to wonder about the implications of parks, fitness centers, pools, and playgrounds on seniors’ health and well-being. How do various designs of public spaces for play and fitness convey cultural attitudes toward the aging? How can they help foster an active lifestyle in later adulthood? Here we look at a few model approaches, which, while by no means exhaustive, suggest reverence, respect, and compassion for the aging.

The John G and Phyllis W. Smale Riverfront Park, Cincinnati
Along the banks of the Ohio River in downtown Cincinnati, lies the John G and Phyllis W. Smale Riverfront Park, an elegant 32-acre senior friendly park designed by Sasaki. Framed by the historically significant Roebling Bridge, there is much to love about this park and the civic activities it offers, including staging for pre- and post-game events for the Bengals and Reds, interactive ground-spray fountains, a sculpture play area, and public landings and seasonal dockings and wharves servicing the public and commercial cruise boat traffic. But what first catches the eye are the little human touches that make the park a welcome place to exercise, catch a show, or while away the hours. Oriented toward the water, swinging benches hung from sculptural steel update the classic Americana porch swing for the 21st century. A 1000-foot long riverfront promenade and integrated cycling center complete the package of a park that is truly a great destination for active seniors. 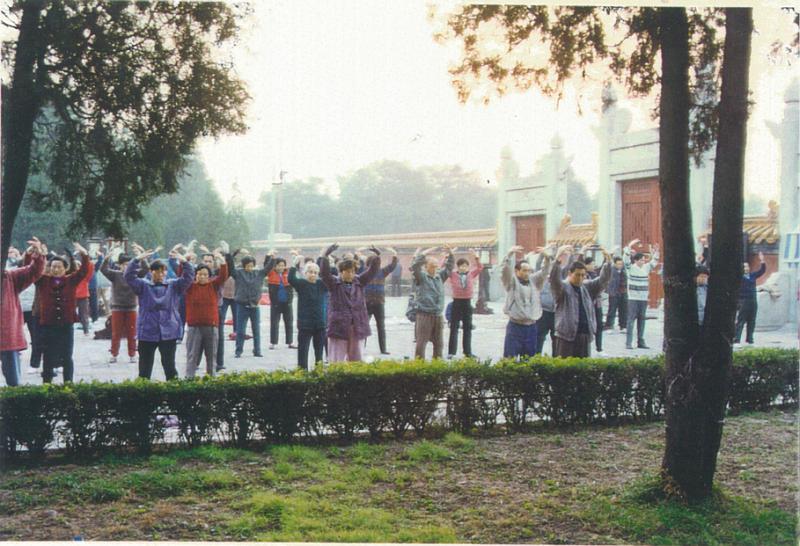 Ditan Park, Beijing
Early morning exercise is a ritual among many aging Chinese. At parks in Yangzhou, Beijing and Guangzhou, you’ll find seniors practicing tai chai or doing regimented movements to improve circulation. Others are busy juggling, top spinning, or engaged in Uighur dancing. You’ll find modern exercise equipment at these parks, too – striders, hand cranks, seated rows, ellipticals and the like – but what’s even more enviable about places, like Ditan Park in Beijing, is how they encompass a cultural openness toward public exercise. Here the venues and tools for fitness are often very simple. An open pavilion or a stand of trees can serve as the backdrop for all manner of physical activity. As one writer for the Guardian notes, “There is no room for mocking bystanders in this park; it’s a place of activity where anyone can try their hand at anything.” 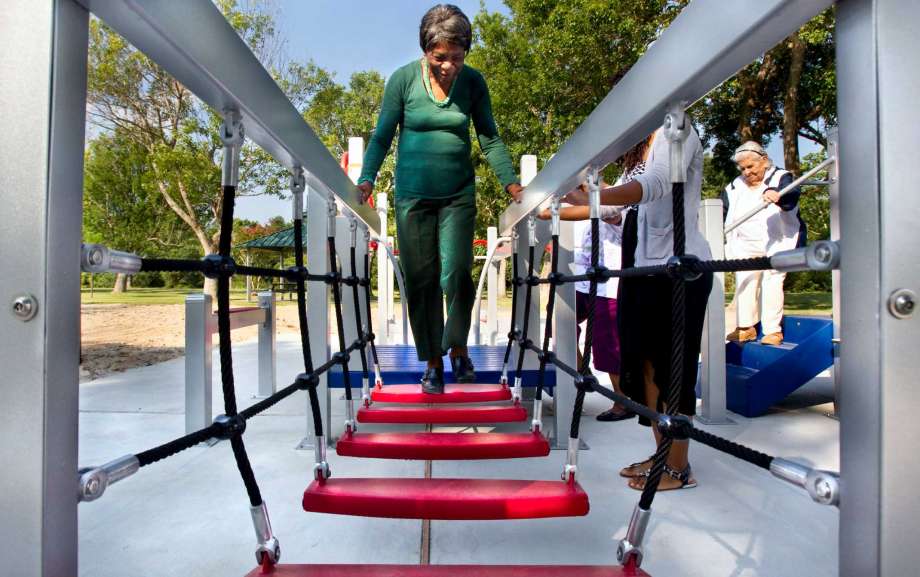 Carbide Park, La Marque, Texas
In a widely circulated photo shot by Stuart Villanueva of the Galveston County Daily News, 84-year-old Zady Jones is seen crossing a rope step bridge in what county officials have touted as the first “motion wellness system” playground in Texas. Opened in 2014, the Carbide Park senior playground in La Marque features $36,000 of exercise equipment intended to help seniors maintain their coordination and balance. The component list is long and impressive, including fitness steps, low and high chin-up bars, balance stools, a wavy balance beam, and a stretching board. One goal of the park, cited by Galveston County Commissioner Stephen Holmes in an Associated Press report, is to become a social hub for older adults. Included in the design is a fall prevention assessment and training tool.

Barcelona, Spain
Barcelona Spain has built around 300 playgrounds for senior citizens that are designed to improve fitness and decrease isolation. If you can’t make the trip overseas to get a glimpse of these multigenerational playgrounds for yourself, you’ll find an excellent example in this YouTube video created by Gerry Hadden of PRI’s The World. What’s striking about the playground is how similar the equipment is to what’s often found children’s playgrounds. There are curving pipes with movable rings to maintain arm strength and fine motor skills; step bridges with hand-held rope supports for keeping limber; hand cranks that turn like bicycle pedals. Physical therapist Paz Vidal explains that the park’s intention is “to break the myth of the old person coming to the playground and just sitting while the grandkid plays,” and, further, that because children can also have fun, the park “helps create family cohesion.” It’s also abundantly clear, given the close proximity of the components to one another, that the park is a place where seniors can schmooze and make fast friends. 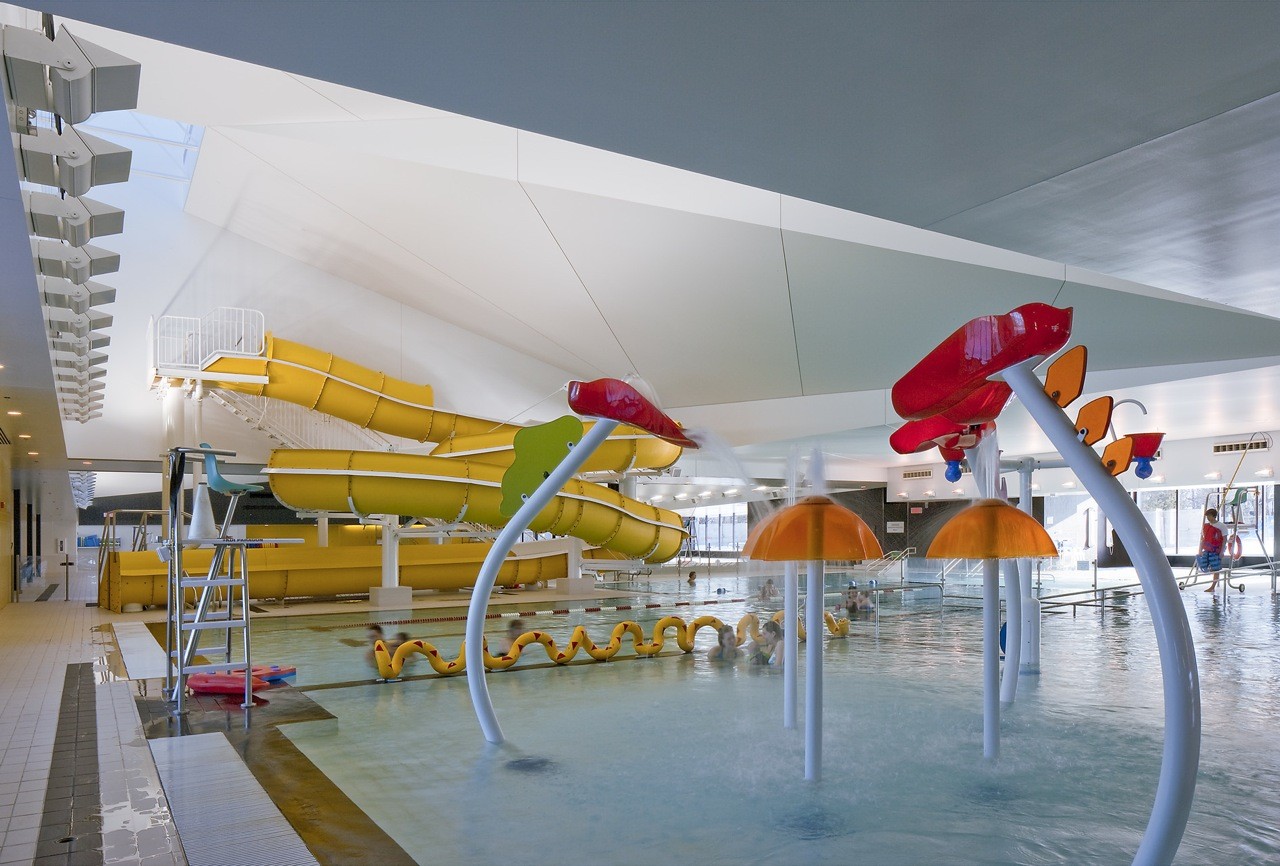 Aquatic and Recreation Center, Saint-Hyacinth Quebec
There’s no reason to knock water aerobics, but one look at a new ACDF-designed aquatic center in Saint-Hyacinthe Quebec, and you sort of rethink all your preconceived notions about the typical rec center setting for aquatic fitness. Modeled after a glacier, the interior walls are geometric and monochrome white, framing a modern natatorium that includes a competition pool, waterslide, therapeutic basin, diving boards, and 3-meter platform. Structures resembling aquatic plants rise from the water, spraying water and serving as hand holds for water-treading exercises. With poolside seating that can accommodate 450 visitors, along with multi-purpose rooms for community events, the natatorium is a steamy all-age oasis in cold Quebec. 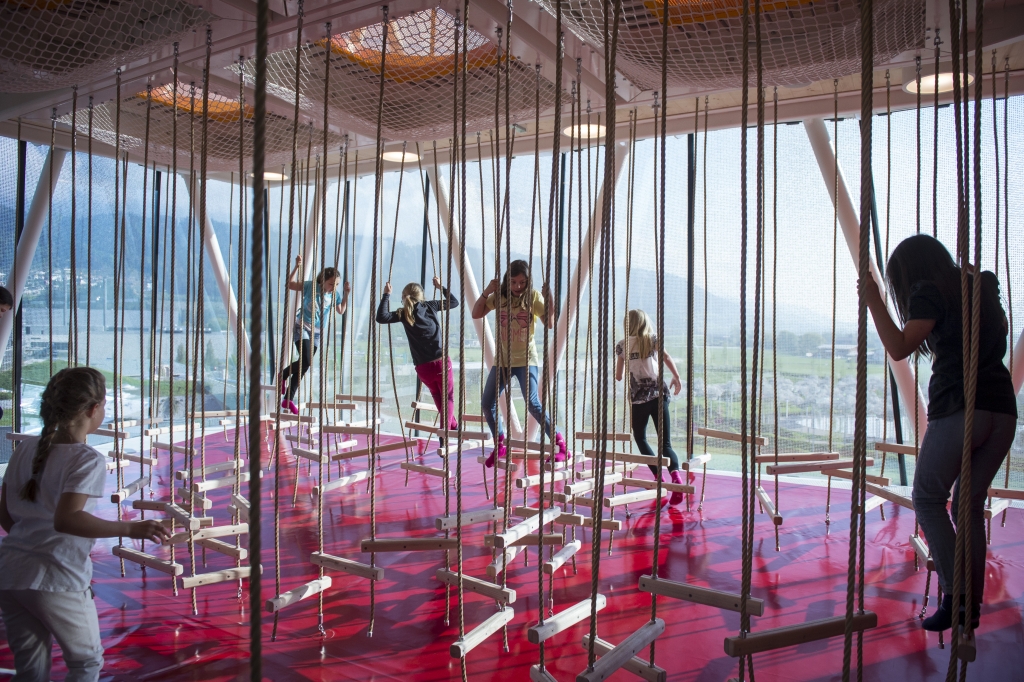 Crystal World Playscape, Wattens, Australia
Paige Johnson, author of the wonderful Playscapes blog, notes “a trend of design-focused corporations selecting bespoke play installations as carefully as they would their lobby art.” She points out that many of these interior play spaces, designed as part of the visitor experience, are multigenerational and “worthy of serious design attention.” One is Crystal World, a stunning play environment designed by the Norwegian firm Snohetta for the jewelry company Swarovski. Rooms bathed in natural light are home to net climbers, tunnel slides, and this array of rope-hung steps that, in a different setting, could well be a gibbon’s paradise. Community and municipal projects rarely have the budget or creative freedom for such elaborate designs, but there are plenty of good ideas here that could be adapted for more modest projects at senior and community centers.