Peruse the entry for Teri Hendy in the Play and Playground Encyclopedia and try not to be impressed. The Cincinnati-based design and safety consultant has advised the playground industry for almost 30 years and chaired or assisted ASTM (American Society for Testing and Materials) International subcommittees behind some of the core standards for residential and public play equipment. She has served as a member of ASTM International’s executive board. And that’s just the prelude.

Over the course of her career, Hendy has founded and directed her own consultancy, Site Masters, Inc.; wrote an influential article linking play to academic achievement, Jungle Gym or Brain Gym?; and created a curriculum for practitioners to apply Americans with Disabilities Act (ADA) guidelines to playgrounds. Along the way, she co-authored the curriculum for the Certified Safety Inspector Course, designed award-winning playgrounds and museum exhibitions, and developed a playground hazard identification and maintenance system used by parks, schools, science centers, zoos, and botanical gardens. In short, Hendy is an authority on all matters of playground safety and design.

Interestingly, though, the trained artist and educator came to the playground industry through the back door. In 1984, she purchased a wooden swing set for her children, ages 2, 4, and 6. After watching them use it, she had some ideas for the product’s designer. “From a child development perspective, he wasn’t designing with young children in mind,” Hendy says. That conversation led to the development of a new product more appropriately sized for younger children and, eventually, an invitation to an ASTM International meeting, where a small subcommittee was developing a standard for residential playground equipment. She attended the group’s meetings faithfully for a year and, in 1986, they appointed her as the chair. She’s never looked back.

It’s been a thrilling, if unexpected, career, and Hendy continues to enlighten the industry, even as she’s closing the books on Site Masters, Inc. to pursue her retirement goals: writing a book, creating podcasts, and starting a new institute. We caught up with her recently to discuss a sensitive topic at the top of our minds – playground safety. 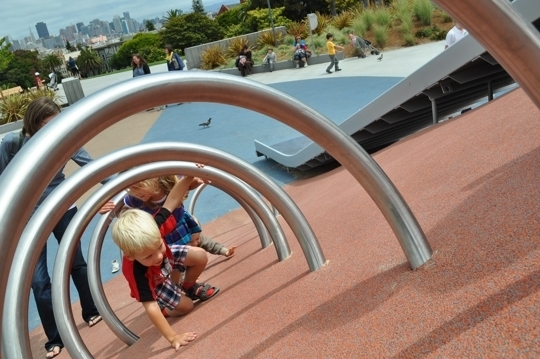 How did you earn your stripes as a specialist in playground safety?
In 1988, ASTM began developing standards for public playground equipment; they asked me to assist in the initial meetings. I was intrigued by it and continued to be involved; that’s how my consulting grew. I never imagined I’d be doing what I’m doing. I thought I’d be teaching art. Life takes you in a weird way.

You did some early work with the design of McDonald’s Playlands. Tell us about that.
I was doing work for a sale representative for Miracle Recreation who sold public playground equipment to McDonald’s and Burger King. He knew I could draw pictures, and I took some Polaroids of one of the restaurants. He brought me manufacturer’s engineering drawings of products he wanted to sell to the restaurants, and I drew renderings of what the playspaces would look like. That piqued my curiosity about public playground equipment.

How did you reimagine these playspaces?
From my background in fine arts, I knew form follows function. The spaces weren’t functioning well for children five-years-old and younger. This was in the era when McDonald’s Playlands were outdoors. They had very high slides. The idea was parents would see the slides from the expressway and bring their kids to Playland to burn off steam. I suggested adding smaller components to make the playgrounds more fitting for younger aged children. My children were very young then, and, as a mother, I was seeing what they could and couldn’t do.

By 1993, we had a good foundation of standards, which, I think, we were all happy with. At that time, attention turned to the importance of surfacing. We developed and published standards for soft contained play systems and impact attenuating surface systems. With 75 percent of playground injuries resulting from falls, what you’re falling onto becomes very important. Manufacturers were important in advancing ASTM F1292, the safety standard for surfacing within the use zone of playground equipment. Many of them were introducing rubber mats, poured-in-place surfacing, and engineered wood fiber, and, at the time, there was not a uniform way to assess their performance. The standard was created as a test method to measure how well surfacing would absorb the energy of a falling body. 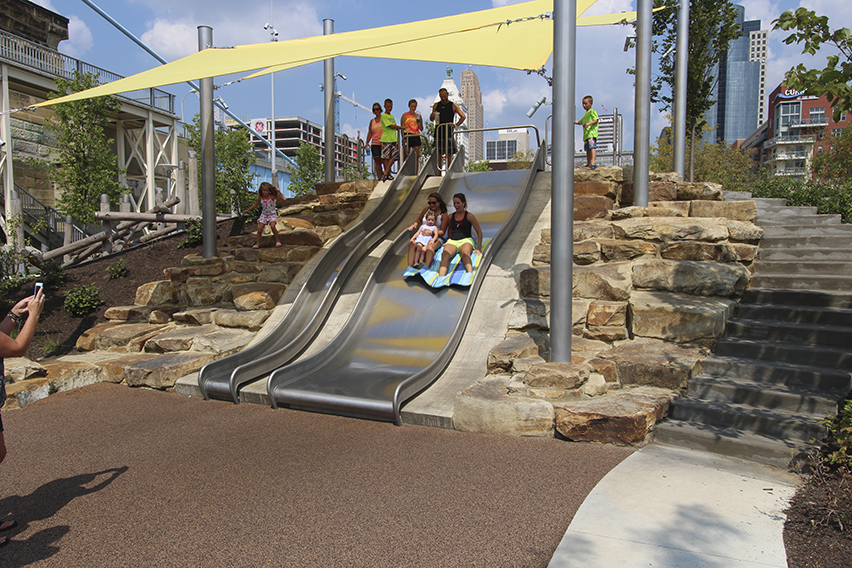 Are rubber surfaced playgrounds safer than those with materials like sand, wood chips, and pea stone, which we don’t see as often today?
We all know, anecdotally, that if you used sand or pea stone, you didn’t see as many injuries. We needed a method to consistently measure the protective characteristics of a surfacing material. The standard was really developed to prevent life threatening and seriously debilitating head injuries. If the surfacing is doing its job, children should not suffer serious head injuries from falling. It’s interesting, though. Material use varies by climate and environment. Sand is still used in beach areas. In the frozen tundra of Fairbanks, Alaska, pea stone is the preferred material because it performs well. Really, what promoted the transition from sand, shredded bark mulch, and pea stone to rubberized materials was not so much safety concerns, but ADA compliance. At least half a playground has to be accessible to a child using a mobility device. Rubber surfacing makes that easier.

Over the past 30 years, how have ASTM International standards affected playground safety?
They have made us aware that through design we can eliminate known hazards, and I think playgrounds are safer today than they were 30 years ago. Injury statistics don’t necessarily show that. The Consumer Product Safety Commission (CPSC) puts out statistics every decade or so, and report roughly the same number of injuries. But these statistics don’t account that there a lot more playgrounds than there were 30 years ago. So while we haven’t seen injury rates drop, I don’t think that indicates playgrounds aren’t safe. Serious injuries are few and far between. Today, there is a greater chance a child will suffer a head injury in a gym playing basketball than on a playground.

How does ASTM International evaluate playground equipment?
ASTM’s work has evolved hand-in-hand with the CPSC. In the early 80s, they developed a system of injury reporting that reveals known causes of injuries, of which playgrounds play a small part. We relied very much on injury data from the CPSC, insurance underwriters, and manufacturers’ legal representatives in the development of standards. In the beginning, manufacturers were afraid to talk about injuries for fear of liability. To the benefit of the greater good, they’ve become much more open and trusting. Now they are generally very concerned if they hear about an injury or pattern of injuries and bring it to us. It’s a proactive industry. 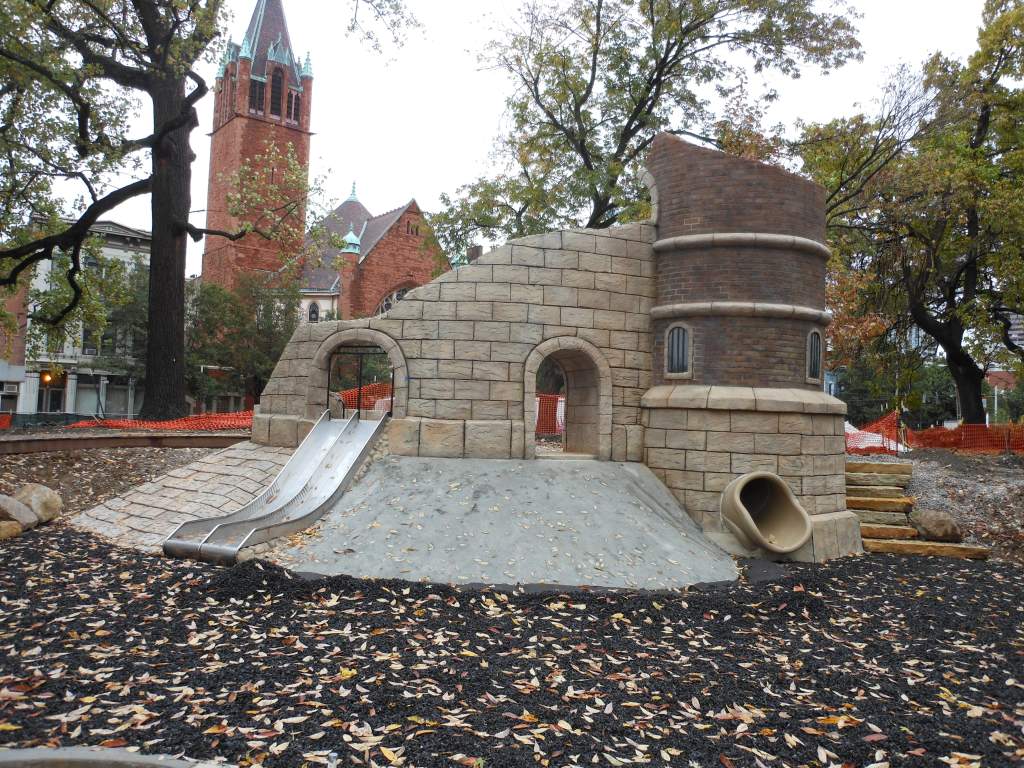 Have safety requirements led to new types of playground equipment? Are there items that have largely disappeared?
I don’t know if the requirements have led to new types of equipment, as much as they have changed the way products are designed. With merry-go-rounds, one thing we have addressed is speed. Manufacturers now put a speed limiting device on these, so kids don’t fly off. Adjusting platform heights so they are lower to the ground and eliminating openings have also made merry-go-rounds safer. Openings can be a hazard because kids stick their fingers in them. This a good example of how it’s not only the manufacturing of products that has changed. A big part of playground safety is ensuring equipment is in good working order; broken handles are repaired, holes are filled in. One requirement we have is that manufacturers develop maintenance and inspection protocols for their products. When we first developed these standards, we realized we needed a way to teach people. Working with the National Recreation and Parks Association, we developed an education program to teach these standards: the Certified Playground Safety Inspector course.

What would you say to critics who say US playgrounds today are too safe; they don’t give children enough opportunities to challenge themselves and take risks?
We’ve been accused of “dumbing down” playgrounds with standards. I would argue the dumbing down isn’t a result of the standards; it’s a result of attorneys using the standards in a way they weren’t intended to be used. There is no such thing as a safe playground if that means a child cannot be injured. It’s just not possible. Children run into each other. They run into equipment. They do things we don’t anticipate. Even when they do things we do anticipate, when children take risks, there is a risk of failure. That doesn’t mean there is anything wrong with the equipment or surfacing. I work with school administrators who say they don’t want swings. Kids fall out. They get hit by swings. There are injuries. Yet kids need that movement. In other instances, insurance underwriters have refused to insure equipment over 60 inches. That’s absurd. if we don’t have risks, kids get bored and create their own risks. It’s not very exciting to climb something that is no taller than you are.