Outside the Woodinville Library, in the wooded suburbs of Redmond and Seattle, Washington is an Exploring Garden with two parabolic dishes that could be mistaken for radio antennas.

But watch the children. By now, years after the dishes were first installed, the kids know what to do. One runs to the farthest dish and whispers into it ever so softly. At the second dish another child, or perhaps mom or dad, cocks an ear and hears the message as clearly as if it was spoken in front of them.

These are Goric’s Whisper Dishes. They dramatically demonstrate that sound travels in waves, a discovery first made by Leonardo da Vinci. (Some might argue it was the early Greeks.) Scientifically known as parabolic acoustic mirrors, they operate by collecting sound waves and focusing them to a central point, which amplifies the sound of even a kitten’s purr from yards away.

At Woodinville the Whisper Dishes are part of the library’s Exploring Garden with elements to appeal to each of our five senses. The dishes speak to our sense of hearing.

First time visitors are sometimes bewildered by the two dishes. Among the younger kids, says Pam Hunter, a long time librarian at Woodinville, “It’s hard for them to figure it out.” With a laugh, she added, “And their parents.”

It’s rare for a Whisper Dish to be installed at a library. Woodinville is the only one with Goric’s dishes. Most are part of science and children’s museums where they serve a teaching purpose with displays and videos explaining the principles of how they work. 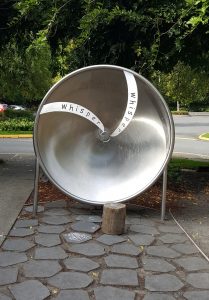 To make learning fun, the dishes are installed in pairs so kids and parents can whisper messages back and forth. However, single unit, hand-held dishes connected to a microphone are used by TV broadcasters to pick up distant sounds like a quarterback calling plays in a football game. You’ll occasionally see them being used for surveillance in police shows and spy movies.

In the 1920s and early 30s, the British experimented with large concrete reflectors to detect the sound of distant aircraft. Many of these still exist. The same physics makes possible the gigantic radio telescopes used by astronomers to detect distant objects and plumb the makeup of the universe. The largest of these is in China and is 1,600 feet across.

Goric’s Whisper Dishes are only slightly more than 6 feet across, yet can pick up a whisper from a companion dish up to 50 feet away.

As the Woodinville Library proves, Goric’s Whisper Dishes aren’t just museum pieces. They enchant visitors of all ages, while helping them discover the amazing science of sound. They make an ideal addition to modern playgrounds, schools and interactive play walks.