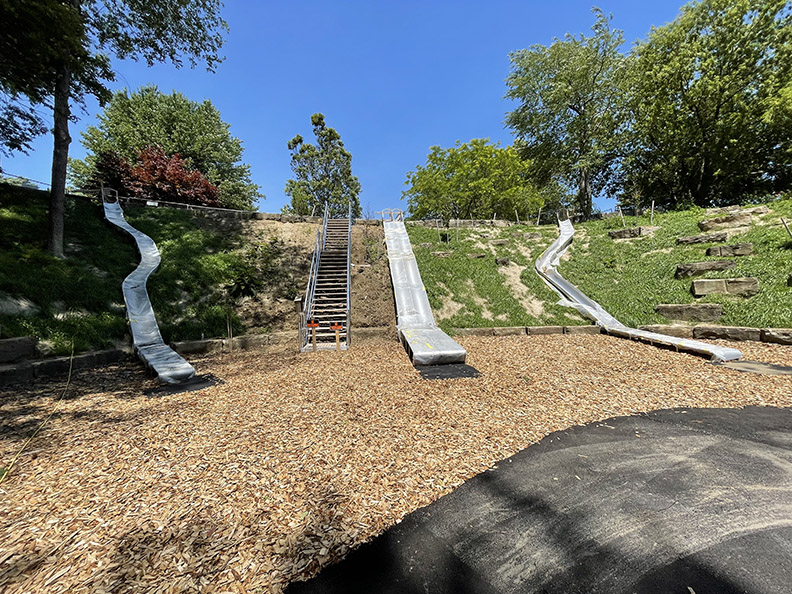 Even before their official dedication last month, the Griff slides of Erie, Pennsylvania had taken on almost mythic proportions.

“This is just huge for the Erie community,” said landscape architect Alex Luddy. “That’s shown by all the community involvement we had.”

From a gleam in the eye of Erie developer Rick Griffith, to the completed project, the effort to bring three, 40-foot slides to an overgrown, unused hillside once used as dump for old bricks, garnered an astonishing amount of media coverage, not to mention support from the community, government and business.

“It really is a community project, because so many different people were involved with making this come to life,” said Luddy who with his boss, Dan Dahlkemper, owner of Dahlkemper Landscape Architects & Contractors, designed and helped manage the project. 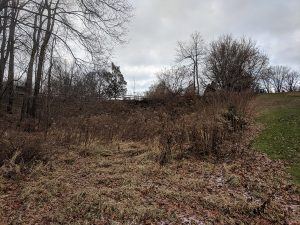 The site was an overgrown brick dumping ground.

They’ve been involved from the beginning, from when Griffith in 2015 or maybe it was 2016 first told Dahlkemper he had this idea for slides – fast ones, curvy ones, a lot like those he saw on a trip to New York. To kick start the project, Griffith pledged $125,000.

It took a few years of planning and fundraising and one failed bid effort before construction finally got underway in the summer of 2020. But it all came to a grinding halt that fall when the general contractor and the company chosen to supply the slides failed to come to terms.

What was just the most recent of what the local newspaper called a “rough patch,” didn’t merely delay the project, it threatened its scope.

“We had a situation,” explained Luddy. The slope was cleared. The grading done. Some of the foundation work for the slides was ready.  But the company that was to have delivered the slides, was suddenly out of the picture.

That’s when Luddy turned to Goric and CEO Laura Guscott.

Luddy first met Guscott years before when planning was just beginning, to discuss slide types and configurations and to get a sense of cost and turnaround time. Other equipment suppliers were also consulted and made proposals.

Working on a shoestring budget, Luddy and Dahlkemper and the Lake Erie Arboretum at Frontier Park (LEAF), which manages the park and was driving the project, chose the lowest bid. But when the general contractor, Considine Biebel & Company, and that supplier parted ways, Luddy recalled how much help Guscott had been years before.

Reaching out to her and the Goric team got them through the “rough patch.”

“I explained the situation and where we were at with the project,” Luddy recalled. “Everything’s kind of in place,” he told Guscott. “Everything’s been cleared. Some foundation is here. We have things already in process that we’re planning for the other [company’s] slides.”

“They were able to kind of work with those parameters and came back with ‘Here’s some options that we can do with the different slides,’” Luddy said. “Laura picked up right where we left off (in the planning consult years before) and was able to reach right back in and get on it.” 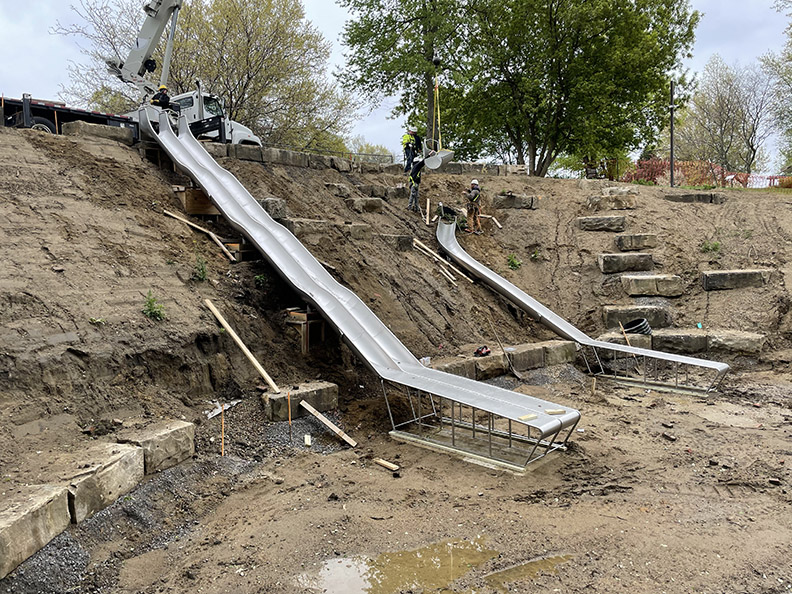 “This all was happening during COVID. We’re having Zoom calls, virtual calls. We’re going back and forth. The construction was already underway so we didn’t have months to sit there and go through the whole design process,” Luddy explained.

“They were very, very helpful,” he said of the Goric team. “It all came together really quickly.”

“From top to bottom working with them was fantastic.”

The three slides were delivered to the site in March, an event covered in the Erie Times-News and on the local TV stations.

“L.E.A.F. is finally back on track with our slide project after several hurdles and delays,” Vern Peterson, executive director of LEAF told the newspaper. “This is going to put Frontier Park on a must-see list for tourists in the community… It is a transformational project.”

When we spoke with Luddy at the end of June, Considine Biebel was putting the finishing touches on a stone archway leading to the hillside slides, which are just steps from an existing playground. The stones for the arch come from an old railroad and were also donated by Griffith.

Soon  after the arch was finished, a ribbon-cutting officially dedicated the slides as “The Griff,” in honor of the man whose vision and contributions made it all happen.

“We’re thrilled and excited with the slides; the makeup of them and just how they’re built,” said Luddy. “They’re beautiful looking slides.

“The overall project, for myself, for the firm I work for, and all the contractors that have been involved, we’re very proud of the project. We’re just proud of how the project’s come together.”