When you think of a water playground, your mind might conjure images of a splash pad. Fountains spraying jets of water. Children running past open-mouthed animals or cartoon characters, laughing and shrieking as they get soaked. And, indeed, this is one version of water play—and not a bad way for kids to spend an afternoon.

But an emerging trend among water playgrounds play conceptualizes the outdoor space as an interactive water laboratory. Taking cues from the hands-on water systems found in many modern children’s museums, these water play areas function as interconnected hydrological networks. For children, whose lives are becoming increasingly directed, the opportunity to call the shots—deciding where, when, and how water will move — is a liberating break from the norm. And it feeds a biological urge. “Humans are wired to manipulate their environments,” explains Morgan Selph, a landscape architect at PlaySpace Designs. “It’s the same thing as when kids go to the beach, minus the beach and the sand. Children get to control and organize their environment. It never gets old.”

The water play area at Knudsen Park in Holladay, Utah, designed by Eric Lyman, owner of the eponymous E.A. Lyman Landscape Architects, in collaboration with Selph, is an especially well-executed example. Unveiled in May to coincide with the park’s opening, the 4,000 square foot water play area sits in the shadows of the Wasatch mountain range and includes a series of stainless-steel canals, basins, and dams installed over poured concrete. Children work alone or, more often, with caregivers and other children, to direct the water flow. Hand-operable pumps, gates, and cranks give them practice with fine motor skills as they move water through the system — often for long periods of time. 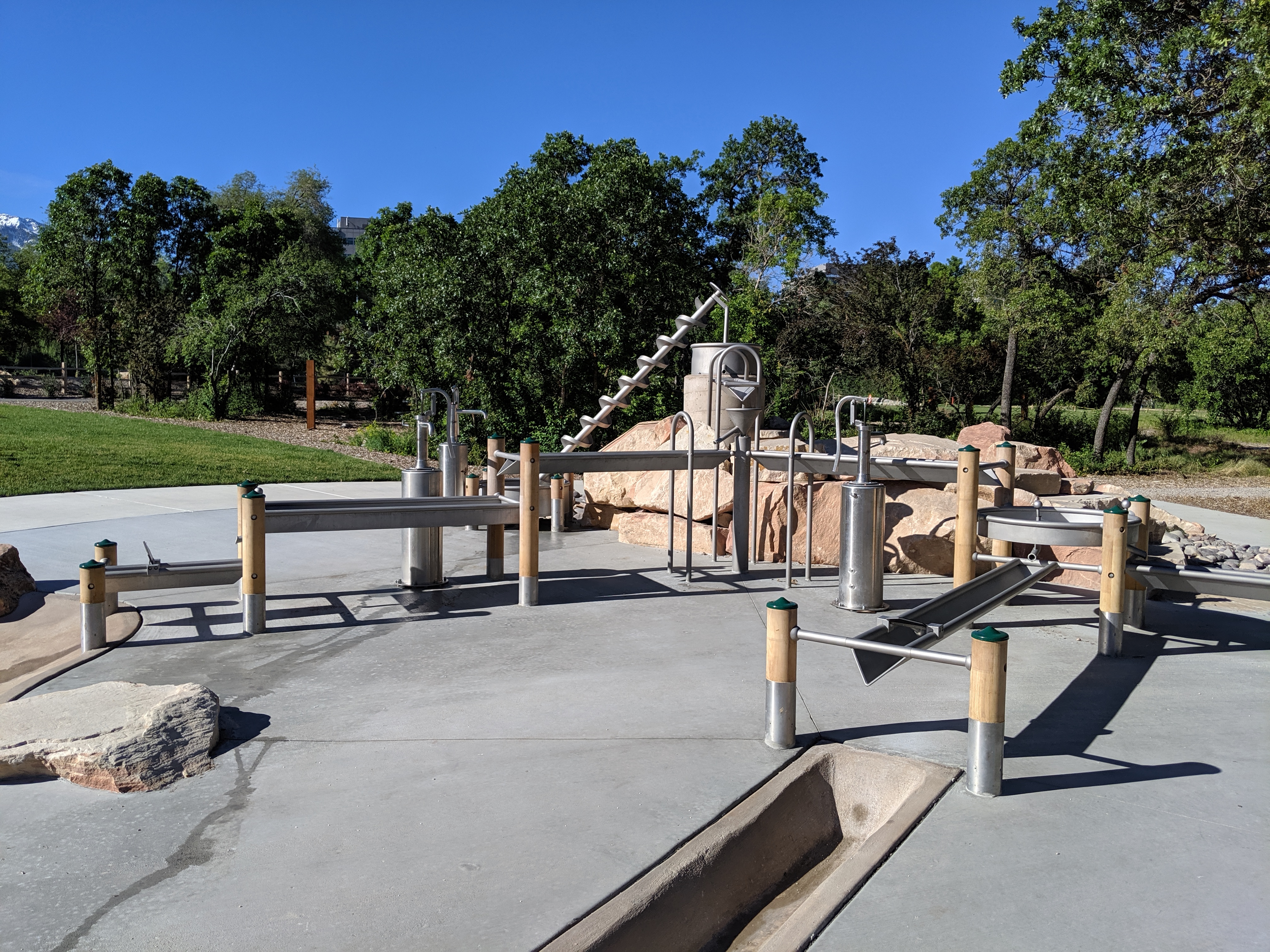 “I was there three weeks after the opening and a woman approached me and said, ‘you look like you know what you’re doing,’ Selph says. I told her, ‘We worked on the design and provided equipment. She looked at me and said, ‘I just want you to know I’ve been here with my children for four straight hours.’”

It’s the kind of compliment Selph likes to hear. He says several Goric water play systems, including the Archimedes’ screw, a water displacement cylinder replicating a tool used by Ancient Egyptians as early as 3rd century BC (though Archimedes’ was given credit for describing it), are integrated into a design whose sandstone boulders, river stones, and tall grasses reflect the natural surroundings.

In some playground projects, the educational aspects of the design are an afterthought—a few alphabet or animal panels built into a play structure but lacking the appropriate context to have their desired effects. In the Knudsen Park project, learning is tied to play. The sequence of steps required to control the speed, direction, and volume of water flow encourages collaboration and scientific exploration.

The design also draws on the site’s history, says Holly Smith, an assistant city manager for the city of Holladay. Settled in the mid-19th century by Dutch-born millright and master joiner Rasmus Knudsen, the land on which the park was built has gone through iterations as a flour mill, family campground, hunting lodge, and strawberry farm. Throughout its history, irrigation has been vital to its agricultural and recreational functions.

Recently, when a local developer sought to purchase the property to build an office complex, a group of concerned residents came forward, urging city officials to step in to preserve the land. With the passage of a $7 million dollar bond initiative and additional funds from Land and Water Conservation Fund and an Arts in the Parks and Historic Sites grants, the city successfully outbid the developer. After purchasing the property, they turned to Lyman and Hughes General Contractors to design and develop a landscape plan that would leave the property largely raw and undeveloped. 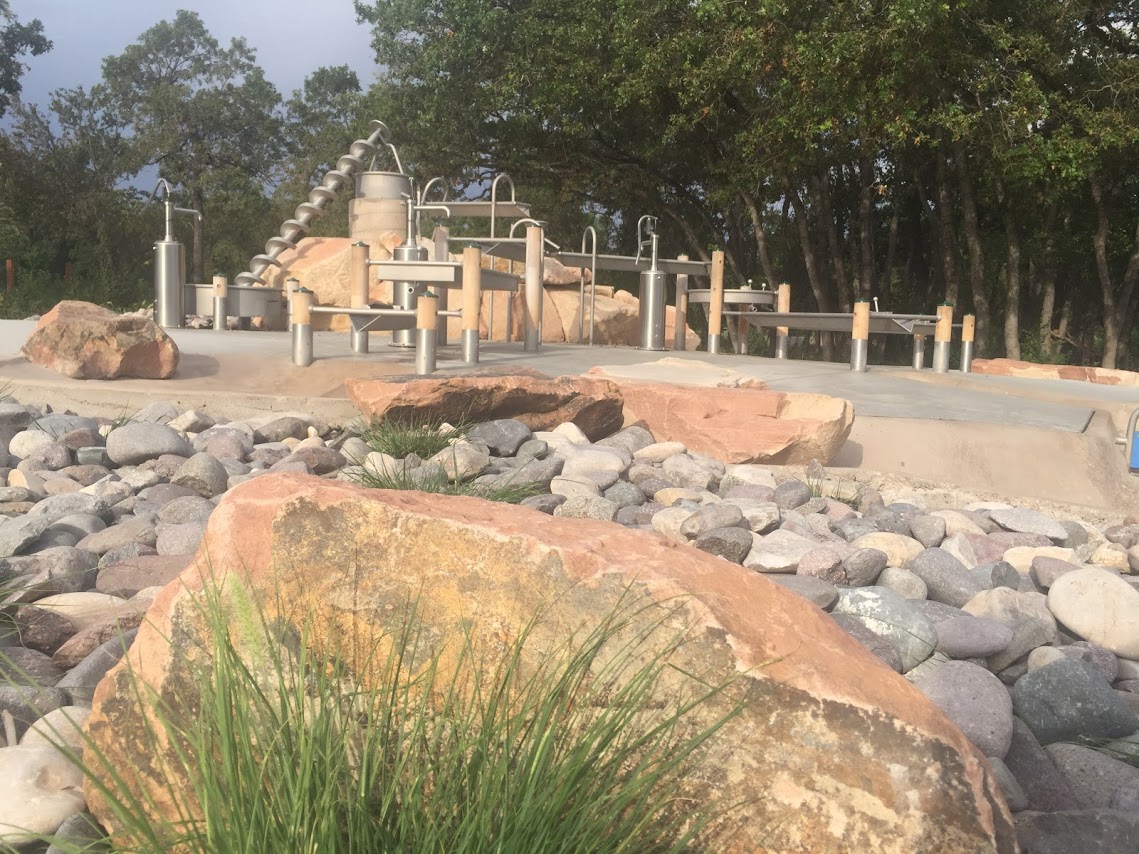 The few built elements of the design, including cycling and walking trails, a bridge, and a board-form concrete pavilion, are executed with a light touch. The removal of a thicket of invasive tree species has opened a nearly uninterrupted view of the Wasatch mountain range and improved access to a streambed running through the park. Groves of native scrub oaks add shade and visual interest to the design.

Prior to the park’s opening, Smith says, the city had only one destination park to serve some 30,000 residents. With mountains and canyons so close to Holladay, recreational greenspace was historically a low priority in the city’s master plans. The opening of a new park has come as a welcome development, particularly as land costs have skyrocketed in recent years — approaching $1 million per acre and making it harder to afford land to develop. “This really went to the residents living on the east branch of mountains of the Salt Lake Valley. With many of these communities built out and land costs so high, we can never catch up with the gap in community parks,” Smith says. 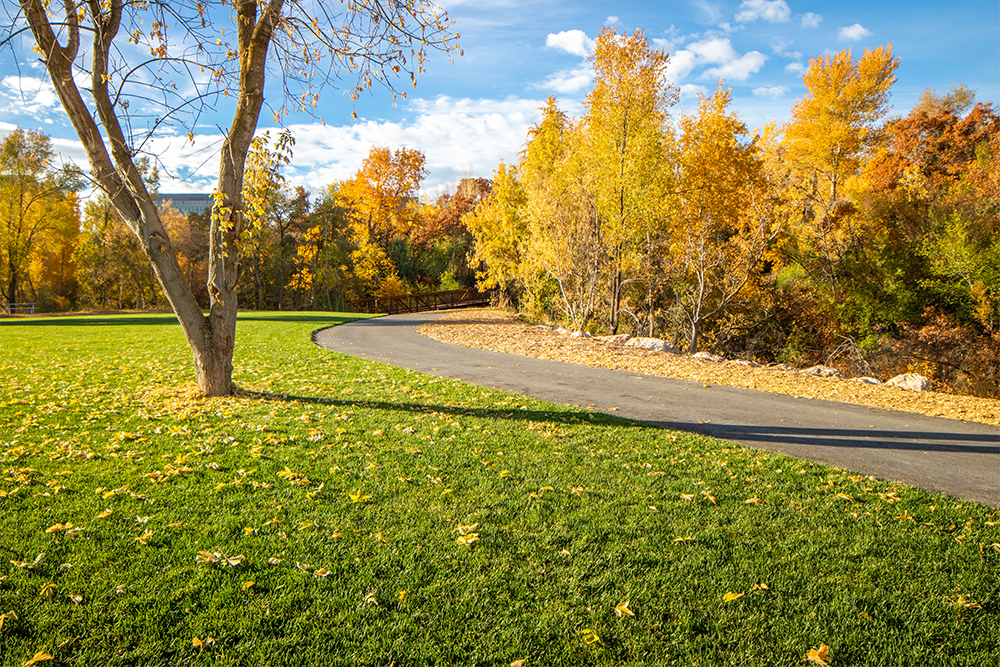 Through still rare in the region and across the United States, outdoor water labs appear to be gaining popularity. The Knudsen Park project took its inspiration from a similar water play area at Creekside Park in Bountiful, Utah, which Smith visited with her children. “What we liked about that project was that there were kids, adults, and babies all playing on it. People across the board. The multigenerational aspect is something we were interested in replicating.”

More outdoor water labs could follow, particularly in warmer climates, as city park departments and private developers take notice. “People pay a lot of money to go to children’s museums and not every city has one. You can have the same experience in a public setting for free — unfenced, safe, fun, and educational,” Selph says.

The Evolution of Nature Playgrounds

How to Make Sand Accessible at Playgrounds