Materials are an important aspect of what makes a play space feel welcoming. Children are drawn to spaces they can explore through touch, to tactile shapes and forms that spark the imagination. It doesn’t take much. A box. A ball of yarn. A ball. With only a few small cues, they can envision themselves leaping across stones in bubbling rivers of lava or commanding small planets, like Antoine de Saint-Exupery’s beloved Little Prince.

Euroflex Balls, available as spheres or half-spheres, are an excellent way for landscape architects and playspace designers to encourage children’s innate curiosity and sense of wonder. Made from recycled rubber and polyurethane, with an optional layer of EPDM (virgin rubber), the spongy, richly textured balls can be integrated into virtually any space to add a distinctive tactile element that encourages independent exploration and social interaction. Mounted with steel anchors or support plates, they come in three sizes and a range of colors. 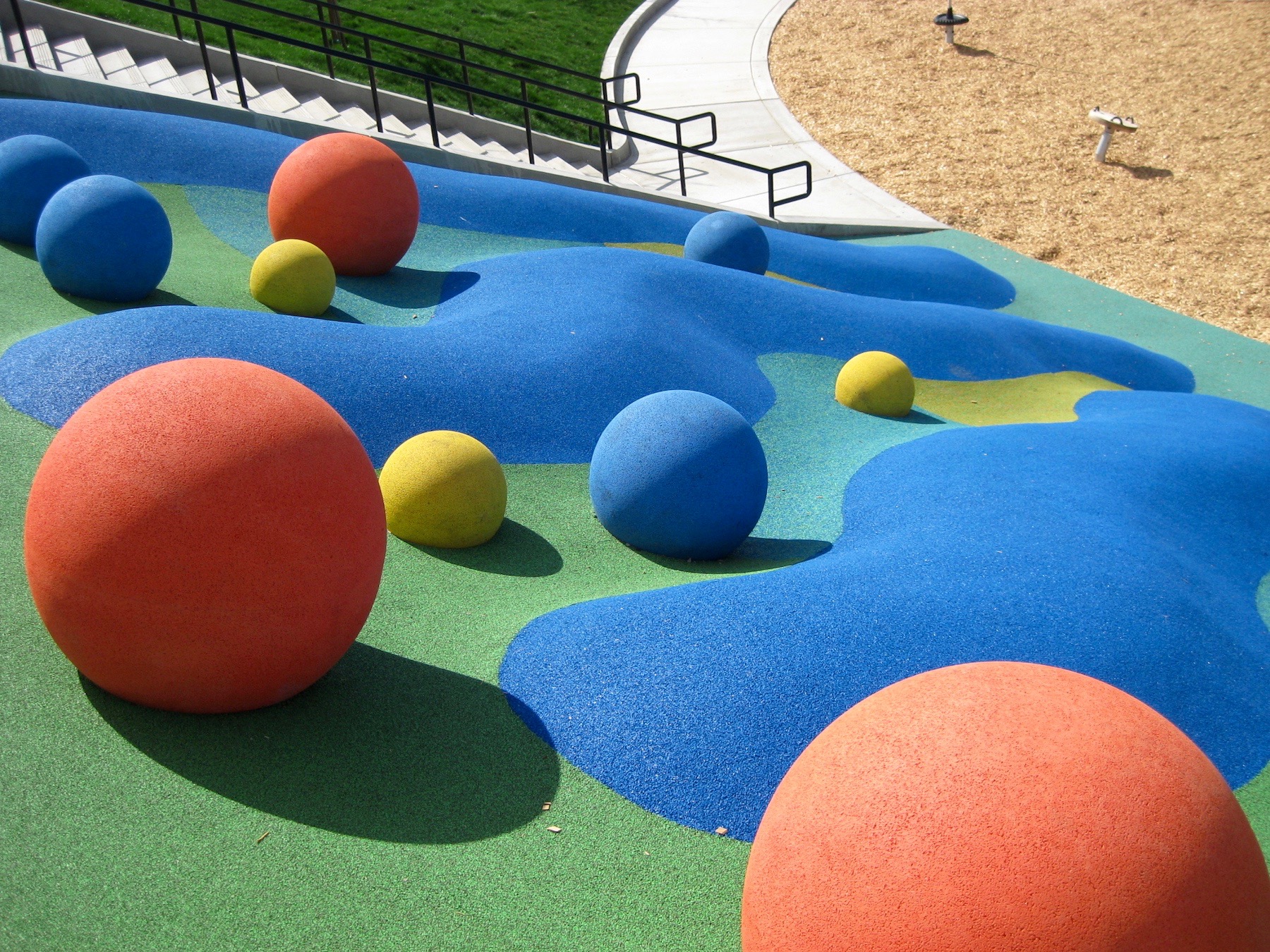 One terrific use case is found at Hillside Park, an eight-acre, below-grade park and play area built in a recently built subdivision of Rancho Cordova, California. The design by Stantec and the Cordova Recreation and Park District (CRPD) uses the existing topography to integrate accessible paths, a picnic area, play fields and the signature feature — a hillside play area formed on the apron of a former stormwater collection basin. The 30-degree embankment features dual concrete slides embedded in resilient rubber surfacing. With a color palette referencing native Sierra Nevada Mountain wildflowers in bloom, the hill presents itself as an exciting challenge to children. Euroflex Balls add striking dimensionality to the hill’s surface and serve as steps to grasp and cling to in route to a summit. At the top, children enjoy a lovely panoramic view of the surrounding countryside.

The Seattle Children’s PlayGarden, a project of the Seattle Department of Parks & Recreation designed to be accessible for children of all abilities, shows off Euroflex Balls in a different way. Clustered together like bonded molecules, the spheres accompany Goric’s Dish and Kalotta Swing in an turf-surfaced play area that complements the campus’s edible gardens, natural areas, ball courts, and public gathering areas. Here the balls are more socially oriented, encouraging communication and group play, while remaining accessible at the ground level where teachers and caregivers can easily assist children.

While Euroflex Balls are a natural choice for a rubber-surfaced or turf playground, they can also be incorporated in more traditional indoor and outdoor playspaces, as well as landscaped plazas, courtyards, and pedestrian zones. Arranged in a linear series like stepping stones or installed in clustered zones across a site, they work well as play elements for balancing, climbing, jumping, or just hanging out and being cool. Fall zones easily conform with ASTM guidelines, and many clever designers have used them effectively for seating or decorative borders, blurring the line between what constitutes a play object and what constitutes a sculptural or functional element.

For children, Euroflex Balls offer many physical and cognitive benefits. When climbing the spheres, they engage important muscle groups in the core, legs, and torso. As they cross paths with friends or strangers or agree to share the allotted seating room of a group of globes, they negotiate boundaries of personal space and work towards cooperative resolution. Planning the sequence of a route across a series of spheres aids in the development of executive functioning and decision-making.

Euroflex Balls also offer benefits for caregivers. Because they do not prescribe a particular age group or mode of play but imply a range of users and uses, they bring together caregivers and children who might not otherwise interact. A parent might be uncomfortable playing “monster” with a child when it means climbing a child-sized play jungle gym designed for children ages 2-5. But the spheres are less standoffish. Their appearance gives the suggestion that adults are not excluded from the play area. And this is an important trait, for caregivers who are made to feel welcome in a play space are more likely to understand their role in its broadest sense: not just single-minded supervisors for their child or children, but part of a larger social safety net.

As architecture critic Alexandra Lange observes in an insightful commentary on Tokyo’s Hanegi Playpark published in the New Yorker, the best playspaces can be seen as “exceptionally porous community centers, in which lots of social activities, for parents and children, occur.” The Japanese adventure playground is safe and liberating for children, she writes, because of infrastructure and community assets: accessible bike lanes, low-story homes where provide eyes on the street, and caregivers who enjoy being there, “ready in case of trouble but not often deployed.” At Hillside Park and the Seattle Children’s PlayGarden the spheres function similarly as a source of community pride and cohesion, geometrically beautiful objects that have value beyond their use for play.

We hope you’ll consider Euroflex Balls or Half Balls as a signature component of your next design.