The Evening Star, a newspaper published in Washington, D.C., places the first playground slide at least as far back as August 1903. That slide was a long wooden chute, the bottom about a foot off the ground and the top 12 feet high and accessible by a ladder. Several decades later, inventor Charles Wicksteed, who made his fortune building shells for the Great War, popularized similar commercial models, on which groups of children can be seen sliding down the smooth planks together. Emblematic of the gender conventions of the era, there were “boys” slides and “girls” slides, with slides for boys steeper than those for girls.

It’s fair to say we’ve made significant progress since then. From freestanding metal slides to plastic and fiberglass configurations of countless variations, slides have evolved dramatically over the last fifty years. As the American Society for Testing and Materials has developed requirements for use zones and exit regions, innovations in design technology have led to new and more elaborate forms. There are spiral sides, wavy slides, roller slides, tube slides, water slides, amusement park slides—and what’s perhaps most common in the U.S. today, composite slides with slide beds connected to a central post-and-deck structure, and jutting out in multiple directions.

Now slides may entering a golden era. One of the most intriguing developments in the last decade, both from a manufacturing and design perspective, is the proliferation of hill and embankment slides. Installed at grade or just a few feet above it, hill and embankment slides have the dual benefit of reducing the risk of fall injury, while providing the length and pitch to give children a thrilling ride.

Another advantage of hill and embankment slides over earlier models is that the contours of the landscape become a key part of the play experience. Whether scrambling up a hillside, climbing a series of stacked boulder steps, or scaling a rubber-surfaced mound, the way children ascend to the top of these slides presents itself as a design opportunity. Cleverly conceived hills and mounds can encourage children to exert themselves physically while avoiding the human logjam that can form at the bottom of a single-user ladder.

Here we look at four Goric hill or embankment slides that are at the forefront of a whole new approach to slide design.

Rush Creek Lodge playground, Yosemite, California (pictured above)
About three hours from San Francisco, at the Highway 120 West entrance to Yosemite Park, lies Rush Creek Lodge, a 20-acre wooded getaway for the tech crowd seeking an escape from the office. In addition to restaurants, ping pong tables, hammocks, swimming pools, hot tubs, live music, and wilderness tours, the 143-room resort boasts an impressive nature-themed playground designed and built by Ron Holthuysen of Scientific Art Studio, who is recognized for his work on the San Francisco Zoo playground and glove-shaped playground at San Francisco Giants’ stadium. The centerpiece of the Ruch Creek Lodge playground is a visually dramatic embankment slide carved into the canyonland like the sharp groove of a fast-flowing river. Goric’s 25’ high, 50’ long multi-vector chute is fast, with a long flat exit runway to ease riders to a gradual stop. 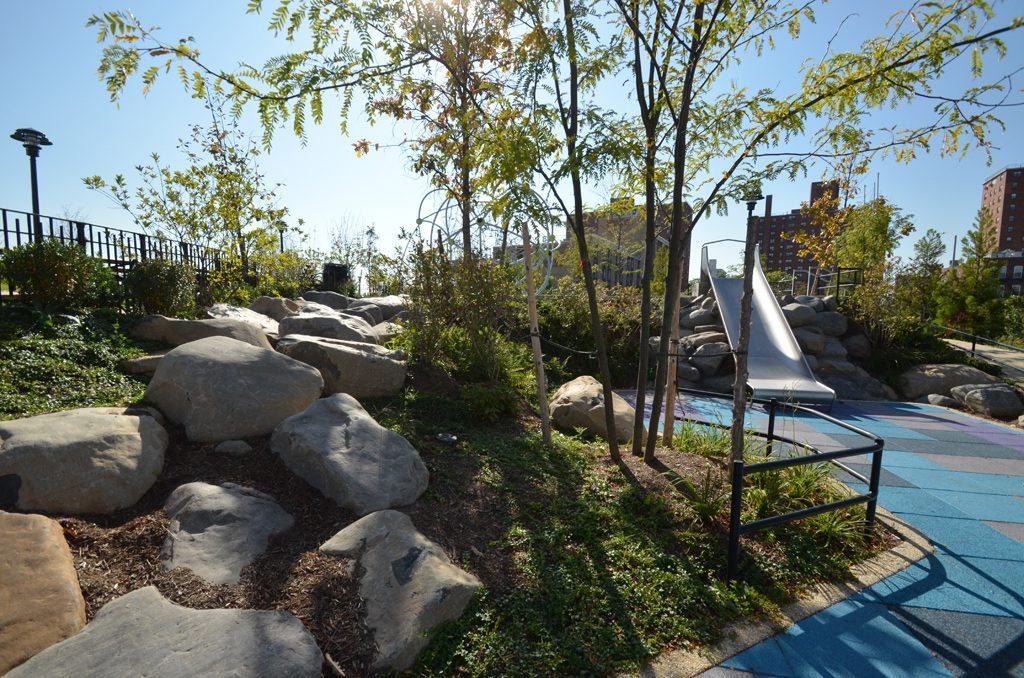 Seaside Park, Coney Island, New York
As part of massive land renewal project at Brooklyn’s Coney Island Park led by Michael Van Valkenburgh Associates with assistance from Sponzilli Landscape Group, Seaside Park is a high-impact destination playground that finds good company in a family-friendly landscape of shade trees, perennial plantings, and the 5,000 seat open-air Ford Ampitheater. Like other recent projects by MVVA, the playground has a lot going for it— gyroscopic net climbers, freestanding spinners, sweeping sail canopies suspended from cylindrical columns. Here Goric’s 7’ high, 3’3” wide hill slide, in addition to offering a fun ride for children, serves as a sort of escape route to the playground’s backstage. It’s not hard to imagine a child zipping down the hill slide and racing to the next destination in a marathon game of chase.

Sacramento Field, Cambridge, Massachusetts
Architecture critic Christopher Hawthorne, writing about U.S. Mexico border wall prototypes for the Los Angeles Times, contends that all architecture boils down to two basic forms: walls and tunnels. “Tunnels suggest connection but also rule-breaking and escape,” he writes. The tunnel slide at Sacramento Field in Cambridge Massachusetts certainly fits this description, offering a place to hide momentarily, while bumping over a series of rollers, before exiting to a new reality. With a smooth unembellished patina, the slide speaks in a vernacular in step with the natural playground design. featuring  The play area is part of a more extensive renovation of the neighborhood park, led by the City of Cambridge. Additional features include an assemblage of use-worn wooden steps, fallen timber arranged as balance beams, and open-roofed wood huts stained to a rich ochre.

The fluid, multi-level design by Warner Larson, seen here on YouTube, integrates several elements, including a synthetic turf field, climbable playground structure, net climber, wood stump steps, and Goric’s Viking Swing and Half Balls. The showpiece, though, is an undulating embankment slide that was drawing a crowd on the first day of school. Carved into the grade of a rubber-surfaced hill, the steel slide whisks children from the school’s ground level to a lower play pavilion, where many of the play features are located. It’s a fitting capstone to a wonderfully diverse schoolyard playspace.

Don’t Tell Your Secrets to a Whisper Dish