To trace the origins of the iconic American shopping mall, one must travel all the way back to the mid-twentieth century. It was in 1956 that Southdale, the first enclosed shopping space in the United States, opened outside of Minneapolis. Over the next fifty years, roughly 1,500 similar structures were built across the country, and the mall evolved into a comfortable fixture in the heart of nearly every major American community.

Around the turn of the twenty-first century, the heartbeat of the American Mall began to slow, gradually drained of life by the robust growth of e-commerce. Over the past decade, online shopping has contributed as much to the metaphorical death of the mall as it has to its physical decline. There is, in fact, a rather macabre website dedicated to the abandoned, weed-filled skeletons of hundreds of malls across the country.

While many structures languish in disrepair, there is a growing movement amongst business and architectural professionals to breathe new life into these antiquated structures and repurpose them entirely. The concept is that malls can’t and shouldn’t compete with the price and portability of online shopping. Instead, they must offer something different. The answer? Experiential shopping.

Rather than replace ailing anchor stores like Sears and Macy’s, some malls are creating a completely new retail experience, one that is as much about serving a community as it is about attracting consumers. One of the most effective ways of drawing in “shoppers” is creating spaces they can’t live without, and family-friendly areas are at the forefront of this shift. If parents have incentive to bring their children into a mall, the theory goes, revenue will follow.

The conception of malls as vehicles for entertainment is not new in America or overseas. The Dubai Mall in the United Arab Emirates occupies a 13 million square foot space and contains an underwater zoo and 250-room luxury hotel. Xanadu Mall outside of Madrid, Spain has an indoor ski slope. West Edmonton Mall in Alberta, Canada is the largest mall in North America and contains a waterpark. But bigger isn’t always better. Many developers learn this the hard way. The New South China Mall opened in 2005 in Guangdong Province offers a cautionary tale; despite having more leaseable space than any mall in the world, the shopping center mostly gained attention for being a “ghost mall”—one that simply failed to attract retailers and customers alike.

Experts don’t see a future tailored exclusively around the theme park model. The creation of family-friendly playscapes need not reach that far. A successful prototype can be found where the University Mall in Orem, Utah once stood. Opened in 1973, the original mall was once the largest in the state of Utah and housed anchor stores such as Nordstrom, Mervyns and Sports Authority—all of which have since shuttered. In 2013, a fully revitalized complex, rechristened University Place, emerged to great success. University Place includes a self-contained outdoor park called the Orchard, which boasts an indoor/outdoor play area with a nature-based design that includes monkey bars in the trees, interactive water fountains and climbable tree stumps. 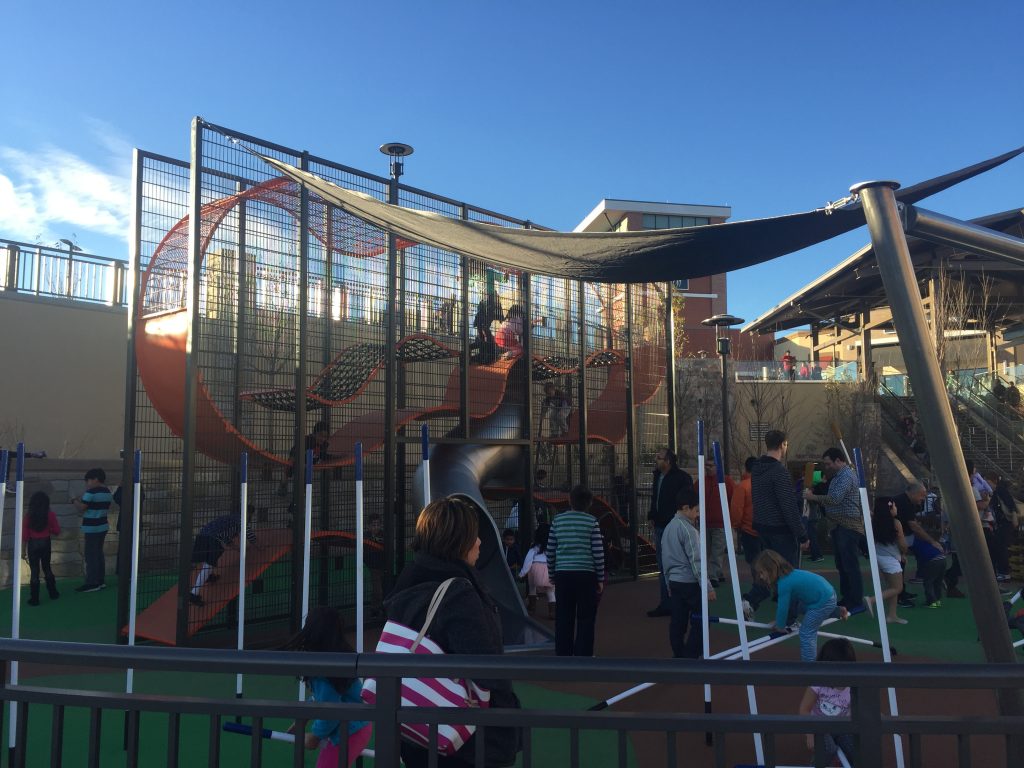 Experts at the business consulting behemoth, McKinsey & Co. recently weighed in on the future of malls in the digital age, noting that rethinking mall space will be their salvation. Shifting the focus from real estate to content will be key. Westfield, one of the largest mall management corporations in the U.S. and the U.K., is working towards a blueprint shift in “re-districting” so that similar products are featured in the same geographic location within a mall. This approach would, for example, place maternity and children’s clothing stores right next to an indoor play area. It’s a clean break from historical retail placement, which was designed to corral the customer in the mall as long as possible, placing revenue over convenience.

Caregivers of young children are a key demographic for merchants. They’re more likely to provide weekday traffic, particularly during extreme weather when parents are looking for a place to let the kids run off some energy. Big retailers like IKEA long ago helped tap into this market by offering free supervised play areas on-site. Småland is an indoor play area available at most of the chain’s largest stores where children can feel a “Swedish forest atmosphere”, and play for free for 45 minutes while their parents shop.

For anyone that remains unconvinced of the draw of experiential shopping, consider browsing through the reviews on the popular travel website, Trip Advisor, which offers a wealth of customer feedback on malls across the world. There are over 4,000 reviews for the Mall of America alone. The Travel Channel compiled a list of the top ten malls in America. Even moderately sized locations like the International Plaza Mall in Tampa, Florida are rated there; on the mall’s homepage is a picture of the indoor children’s play area and a reminder to browsers that the center features “200 specialty shops, including an Apple Store”.

Gone are the days of the coin-op plastic rocking horse wedged under the stairwell near a vending machine. Modern retailers have to work harder to seduce consumers in the digital age, and many are trying. Anchor stores are being replaced with boutique dining, spas, massage shops, and even pediatric dentists. Attracting families is crucial to the ongoing life of the American Mall, and creating modern, natural play areas is key. If parents can and do shop more conveniently and economically on line, retailers simply must give them a reason to load the kids in the car for a mid-week outing. And they need not offer aquariums and ski slopes in order to stay relevant.