100 miles from Nevada’s mysterious Area 51 is the mystifying Area 15 of Las Vegas.

Inside an almost ordinary building of warehouse proportions is a supermarket like no other in the world. At first look, it’s a perfectly normal market, if more colorful and cleanly stocked than where you shop.

Look closer. The soups sort of resemble Campbell’s. But Campbell never made a Barely Barley or Homestyle Pigeon. Next to the Peanut Goo is Tomato Milk. To the other side is Glacier Spackle. Creamy style. 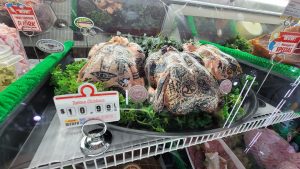 The meat section has tattoo chicken and some sort of wriggly looking meat.

As bizarre as the Omega Mart is, a step through the beverage cooler takes you into a psychedelic back shop, a surrealistic food factory, where ever-changing colors and images turn your supermarket trip into a head-spinning attack on the senses. Rooms that seem alive with flowers open into others where the images almost pop out of other dimensions.

In the midst of a central cavernous space are Goric’s twisting, turning slides transporting visitors from floor to floor. As visitors slide through the double helixes, the exteriors shine red, then blue, then green.

“It’s, it’s quite a mind trip,” says Morgan Selph, who toured Area 15 when it opened in February and was still dazzled by what he saw when we spoke a few weeks later. “It’s quite fun to explore and figure out what exactly is going on.”

Selph is a landscape architect, co-owner and president of PlaySpace Designs. His firm is our representative for five western states including Nevada. More accustomed to designing playgrounds and recreational spaces, he had no idea that the referral from Goric would connect him to a project planned by Meow Wolf, the nation’s leading collective of artists creating immersive and interactive experiences.

“I really just got a call from their project manager who had been scouring the internet looking for stainless steel slides. They ran into Goric (and through Goric) they ran into us,” Selph recalled.

Laura Guscott, president and CEO of Goric Marketing Group, remembers getting an inquiry about the project, which sounded different from the usual calls about equipment and designers.

“It wasn’t until later, after Morgan and the Omega Mart people talked, that I had any idea just how unusual a project this was going to be.”

From Goric’s first call innocently mentioning “there’s a guy in Las Vegas that needs some help with a slide,” the project took somewhere around 18 months, a timeline stretched by the exacting details of the Meow Wolf designs and by lengthy COVID shutdowns.

Selph never met the Meow Wolf people. Instead, like most of the other key suppliers on the Omega Mart, he and PlaySpace Designs worked with the fabricator’s project manager. 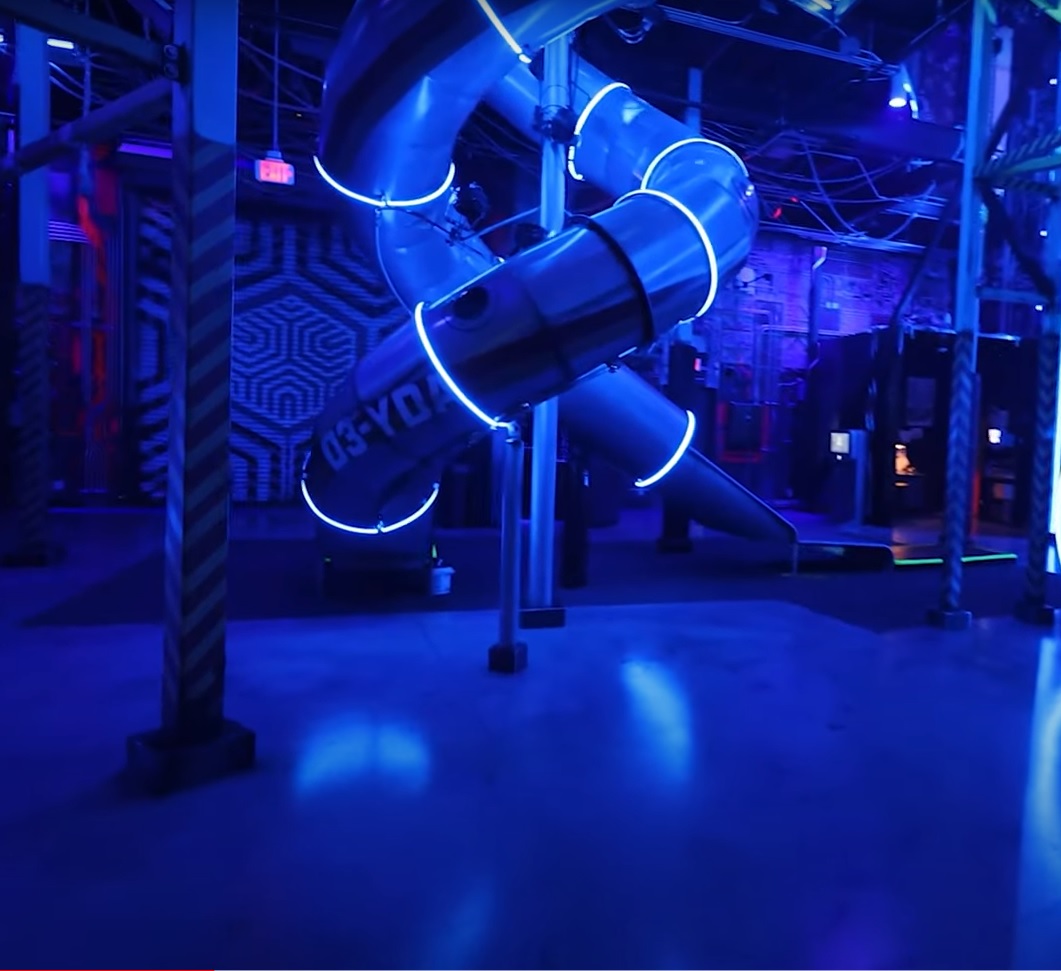 “He basically grilled me pretty hard,” Selph recalled. What can you do? Why do you do it? Why is stainless steel better?

“They wanted a double helix and wanted to know what we could do.”

Goric had done double helix slides before so sent over pictures. When Selph showed them to the project staff, “They said, ‘yes,’ absolutely. Like that.”

Well, not exactly like that it turned out. The Meow Wolf artists wanted a double helix, but starting from different floors and with their own demanding take on the twists and turns, dimensions and look.

“We said no problem. And so we modeled it up. We went back and forth, back and forth quite a bit,” said Selph. “The designers here with the [Omega Mart] fabricators were very, very good 3d modelers.”

Selph, who didn’t get to see the end result until the project was opened to the public last month, was excited and pleased by the effect.  “It really seems like it fits into the overall factory aesthetic,” he says. “But it’s really a fun, playful people mover.”

The two slides that make up the double-helix are the most visible and the most dramatic, especially with the brilliant lighting in various primary colors, but a third Goric slide, what Meow Wolf calls the wormhole slide, is the most other worldly of them. 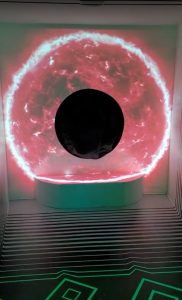 It may also be the most visually mind-bending of them, at least that’s what some of the travel writers seem to say.

The Las Vegas newspaper described the wormhole as an iteration on an earlier design that incorporates “bold design and graphic lighting” with “a dark tube slide that leads … somewhere.”

“A lot of the process is in meeting rooms and playing pretend with friends,” the newspaper quoted the project’s creative director Spencer Olsen saying. “Now it’s like having my imagination on the outside.”

Surrounded by an ever changing, vibrating corona of light – except when it’s something else — the slide entrance is a dark hole you enter not fully aware of just what it is or, as the Review-Journal says, where it leads.

Selph took the tour with his family after Area 15 opened. He may have helped in the design of the slides, but he was as surprised by the wormhole as everyone else.

“You enter the wormhole [through] a kind of surrealistic wall,” he says.

There are projections on the walls and all around the slide entrance. There are two portholes in the slide affording a view of… well, just what changes for everyone.

“And then it turns you around and dumps you to the bottom,” Selph says. “It looks like you’re coming out of a canyon.”

For all that it contains, the huge Omega Mart is just one of the art installations and experiences Area 15 offers. A few of the experiences are free; most charge. The highlight is the Omega Mart.

“Beyond a doubt,” says Guscott, Goric CEO, “This has been the most amazing and unusual project.

”Morgan and his PlaySpace Design team really took this project to heart. Working with our team and the slide builder’s team in Germany, we didn’t just create slides. As Morgan said, we created people movers that make the Omega Mart experience work on every level.”

“This was so much fun,” said Guscott, “I can’t wait for the next opportunity.”

For more pictures by Morgan Selph from Omega Mart and Area 15 click here.