I spent the last few days of my European trip in Sweden visiting my step brother, Simon and his family. Stockholm is beautiful at night (and I’m sure during the day too) and the countryside is picturesque.  I really don’t think I’ve ever seen a more amazing sky at night with such a clear view of so many stars.

Simon and his wife have 3 children, 4, 6, and 8 years old. The real priority of the trip was to spend time with the family and get to know the children, which you wouldn’t think is the easiest thing when we don’t speak a common language –though they could speak a quite a few more English words than I could Swedish.  Somehow we got to know each other just fine through play, drawing, looking at books, making faces and gestures and lots of hugs. 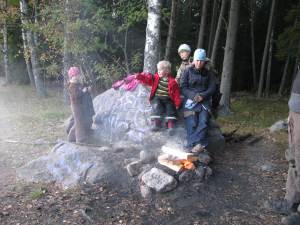 These children love playing outside no matter the weather. It was about 20-30 degrees (30 being “warm”) for the few days I was there and plenty of snow (about 18” or so).  There is a park down the road from the house that has a hill with a wide slide on it, swings and a spring rocker and see saw (both which were not used by the children either because they were covered in snow or lack of interest – not sure which).  I couldn’t count the number of times they climbed the hill and slide back down again with their sleds – or otherwise.  They spent all of the time on the hill, on the swings and just playing in the snow. They were so inventive and creative with the few pieces of equipment.

It became so clear to me that sometimes it’s best to have a few really great pieces of play equipment which are open ended to all types of play and creativity – especially in small neighborhood playgrounds where the budgets and space available may be small.  It’s also important that each neighborhood park has different types of equipment; the variety allows the children to try something new and different from their local playground.

It was such a joy to watch these children play together and with their parents (who also had snow pants on so that they could play in the snow and keep warm). There was another very cool place where they hiked and played –the Troll Forest.  We took a walk through the forest and to an area where we could make a small camp fire and drink some hot cocoa.  Along the way to this area there is a fallen tree that the children love to play on.  I’ll leave the further explanation of the tree to Rick.  I think the tree has inspired him to create something similar in a playground environment.  This is how playgrounds come to life…