Pat Stout went to the 2021 ASLA conference to earn CE credits and discover new and innovative products he might include in a project someday.

He didn’t expect to also be going home with a Goric Crazy Maze. Not, he joked, with his time playing our virtual maze game. It took him something like 37 seconds getting the three balls through the maze, he said.

Teddy Ziolkowski, a landscape design student at the University of Maryland, turned in the fastest time at 11.09 seconds, winning a huge gift basket worth over $200.

“Wow,” was all Stout could say. “He figured out the trick, I guess. I don’t know what it is. But he figured it out.”

No trick. Just practice, Ziolkowski tells us. And a bit of a competitive streak. “I think I’d spend like 10,15 minutes. I’d just sit down and play if I was ever bored. So, it got faster and faster.”

He got his time down to just over 13 seconds and might have left it at that except for hearing someone was clocking 13.9 seconds.

“So, at that point,” Ziolkowski recalls, “I knew I kind of had to focus and go back into it and try a little bit harder. There was someone who was close, but I had to start playing again to get faster.” When we asked him to show us his technique, he beat his own time by better than two seconds. (We added the accompaniment.) 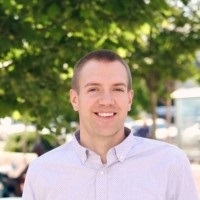 Stout on the other hand, only needed a dose of good luck to have his entry selected from among all the others to win the Crazy Maze. A landscape architect with the Indianapolis design firm Rundell Ernstberger Associates, Stout already has a place picked out for the Crazy Maze.

“We have two little boys, a six month-old (Dylan) and a three year-old (Logan). And we just moved into a new house earlier this year,” he says. “I plan on setting that up in the backyard and get some good use out of it.”

And he doesn’t mean just the kids. “When we have friends over and family. I think it would just be kind of a fun little break,” he agrees.

Fortunately, it’ll be spring before the Crazy Maze arrives in his driveway. That will give the ground time to thaw out and dry out before he starts digging and pouring cement. As it is, he and his wife Kristine are trying to furnish their new house. Ordering furniture and getting it delivered has been a months long process itself, he says.

Stout’s been a landscape architect since graduating Ball State in 2011. He’s worked on several projects, most currently the expansion of Indianapolis’ famed 8 mile-long Cultural Trail.

His favorite project is Old City Park in Greenwood, IN. He was lead designer and project manager, involved in working on the master plan for the entire downtown which included the park as a sort of centerpiece, and “seeing it all the way through.”  “It was a great experience,” he added.

Coincidentally, Stout’s specced Goric equipment when the project’s called for play pieces. “I enjoy the type of products they have. So,” he joked, “I didn’t feel guilty taking something from them knowing that we use them and we’ll continue to have them as a reference on future projects.”