“I hate taking my kids to the playground.”

That’s not something you expect to hear from a person who researches and designs playgrounds for a living.

Yet there was Meghan Talarowski on a TEDx stage, flashing a picture of one of those cheerfully colored, boxed-in, plasticized kiddie slides as she declared, “My kids get bored within five minutes in spaces like this.” 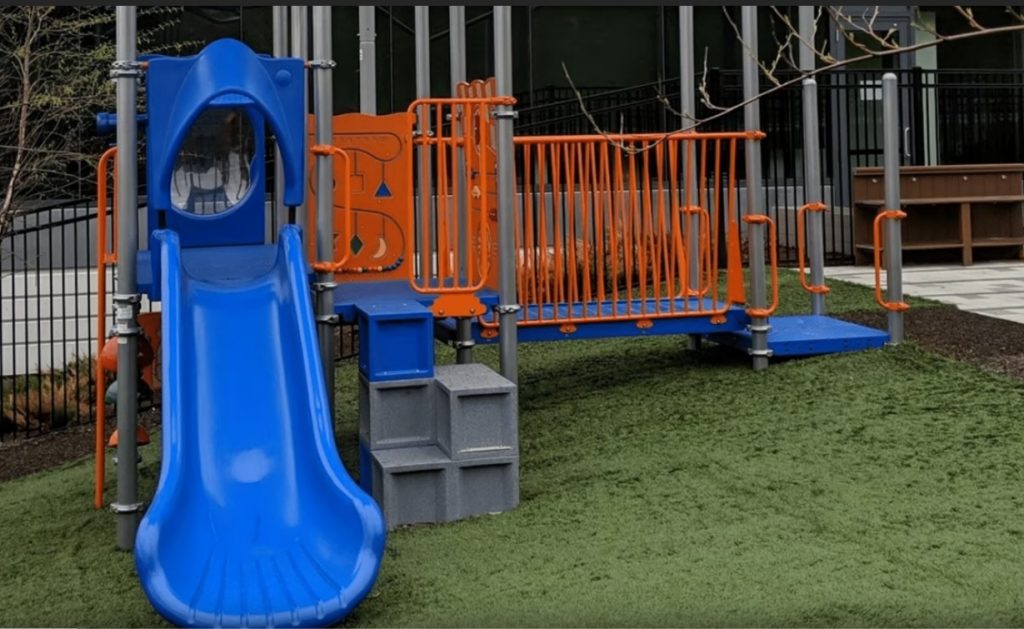 Her ambition is to change that. Talarowski wants to make playgrounds exciting and fun for children and inviting for adults. She thinks playgrounds should be as engaging as the ones she discovered in London that led to her seminal research, the London Study of Playgrounds.

As the study has gained acclaim for demonstrating that playgrounds incorporating “riskier play structures” can be safer and cheaper, Talarowski has become the de facto face of the trend toward more adventurous play. Proponents advocate for playgrounds that intentionally provide opportunities for children to test their physical limits in ways that might cause protective parents to gasp.

Talarowski chuckles at that characterization. Risky play is but one element – an important one, to be sure – of what she found in studying London’s playgrounds. “I talk about that,” she acknowledges, “But mostly, I talk about playgrounds supporting people of all ages.”

“What I really came away with from the London study was that the spaces were good spaces for everyone and that people were staying there for long periods of time because there were bathrooms and places for picnics and swings that fit grownups’ butts. It was a space that everyone felt like they were a part of and were having a good time.”

Her visits to 45 of London’s parks and playgrounds and close, scientific observation of 16, lead her to the recognition that in the U.S., as she writes in the London study, “We have created a nation of overly expensive, homogeneously safe, and insidiously boring play spaces.”

The London playgrounds were not the fenced-off, rubberized, pre-fabricated areas designed to be as safe as possible. Instead, they combined boulders and logs, trees for shade and surfaces of sand, cement, bark and grass. The majority of the equipment was of the climbing variety. They blurred the line between park and playground.

In comparing those playgrounds to those in the U.S., the study said the London playgrounds had 55% more visitors, 14% more adults and 16-18% greater physical activity among the children and teens. They also had fewer injuries and deaths.

Talarowski hadn’t come to the United Kingdom to study playgrounds. Instead, as she visited playgrounds with her then year-old daughter Amelia she noticed they seemed more popular than those back home. The children seemed more active. Her experience working on park projects for The Trust for Public Land and her background in architecture prompted her to turn her curiosity into a research project. It also led her to found the non-profit Studio Ludo with the mission of “building better play through research, design, and advocacy.” She is its executive director.

“The London playgrounds think outside the box,” declared the report published in December 2017.

“They use diverse materials and non-prescriptive, riskier play structures that lead to lower costs and lower injury rates than U.S. playgrounds, which is counter intuitive, given our intense focus on safety in the last few decades.”

That part of the report and a recommendation that in playground design, “Fun should be prioritized over safety and maintenance,” captured the attention of play professionals. By offering the first powerful evidence that risky play could encourage greater activity yet be safer as well as less expensive than traditional playgrounds, it fueled the adventure / parkour trend that was already taking hold. When The New York Times cited the report and other research pointing to the benefits children reap when they engage in risky play, the article garnered largely supportive comments from across the country.

Though risk-averse municipalities are still the majority, adventure playgrounds designed to involve adults as well as children and are growing in number and popularity.

Among the newest is Tulsa, Oklahoma’s Gathering Place, a 66 acre park that includes playgrounds with suspension bridges, climbing towers, sand lots and water play areas. But more than just features that encourage children to push themselves, the park embodies what Talarowski says are the elements that make a park and a playground engaging.

“When I talk about risky play I’m saying risky play appeals to different audiences. We should create spaces that support generational whole family play,” she says. “What are the grownups doing when they’re in the space? As a caregiver, I’m interested also in having a good time.”

The purpose, Talarowski explained, is to determine how the “design of space influences play behavior in kids and adults… What is the impact on public health? Are well designed playgrounds better from a physical activity and social interaction standpoint? Does [an innovative playground] encourage people to be outside longer?” In essence, “What is it that makes a good playground tick.”

When complete, the National Study of Playgrounds will help communities decide what kind of playgrounds to build and what elements to include with the money they have.

The study was to have already gotten underway, but with playgrounds closed because of the coronavirus, the observational part won’t begin until late summer or early fall; possibly not until summer next year.

In the meantime, Studio Ludo is involved in the development of a new park in Hoboken, New Jersey, which is beginning to rise on acreage reclaimed from industrial use.

The team also showed that play doesn’t have to be limited to traditional spaces. In partnership with a local architectural firm, Studio Ludo designed “Play and Learn” features for three branches of the Philadelphia library system. One branch got a climbing wall. A second got a stage for concerts, read alouds and games, and a puzzle nook bookshelf. The third got a climbing tower with reading areas.

Expanding the notion of play is a driving force for Talarowski, who lives in Philadelphia. Growing up in Redding, California at the northern end of the state’s agricultural central valley, she swam in the creeks and played in the wide open spaces and nearby mountains. Finding herself in Chicago’s South Side to study architecture at Illinois Institute of Technology was a culture shock that sparked a career trajectory toward play. The leafy campus was surrounded by miles of buildings, where concrete was more plentiful than trees and open space and play areas even more scarce.

After a few years working in architecture and landscape design, Talarowski followed her calling to The Trust for Public Land where she experienced the success of turning an almost unused urban park into a successful community asset. That led her to the University of Pennsylvania to earn a master’s in landscape design before moving to London and embarking on the playground study.

“I think everybody deserves an opportunity to play,” she says. “That is the thing that unites us all. It’s a common language. And we should all have great places to do it in.”