For many of us, the allure of a waterfront begins in childhood. We remember gazing out at the waves and brightly colored boats, the piers and jetties that stretch into the water. We carry with us a sense of the infinite, made visible in the vast, unfathomable distances of the sea (or, say, the Great Lakes). We are drawn to reflect on larger questions, to pause and simply admire the beauty of the natural world. And, I suspect, for children, these feelings of wonder are even closer to the surface because they are so new and unexplored.

Among city planners and designers, there is growing interest in locating playgrounds along waterfronts. In cities such as Chicago, Louisville, and San Diego, large-scale, immersive play spaces are being developed as integral elements of new park systems and green infrastructure transformations. The best of these efforts draw people to previously ignored, or paved over, waterfront assets by creating pedestrian, cycling, and public transportation routes that make vibrant new play spaces more accessible to young families and those with disabilities. Here we look at several new, or relatively new, waterfront playgrounds that score well on all counts, bringing together breathtaking views, thoughtful playground designs, elegant water features, and access to a range of amenities and programs. 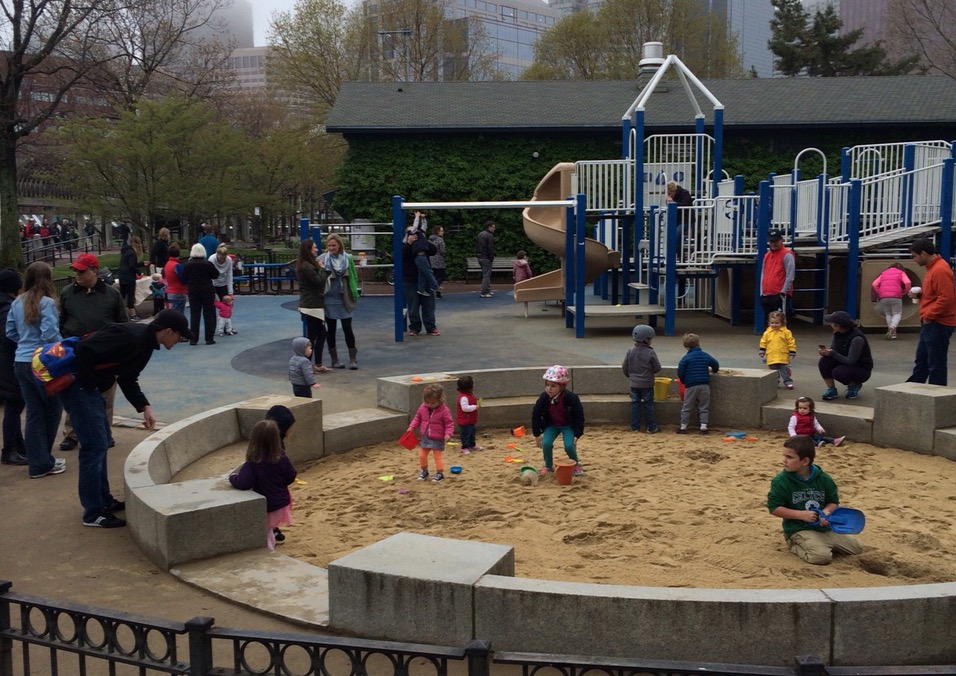 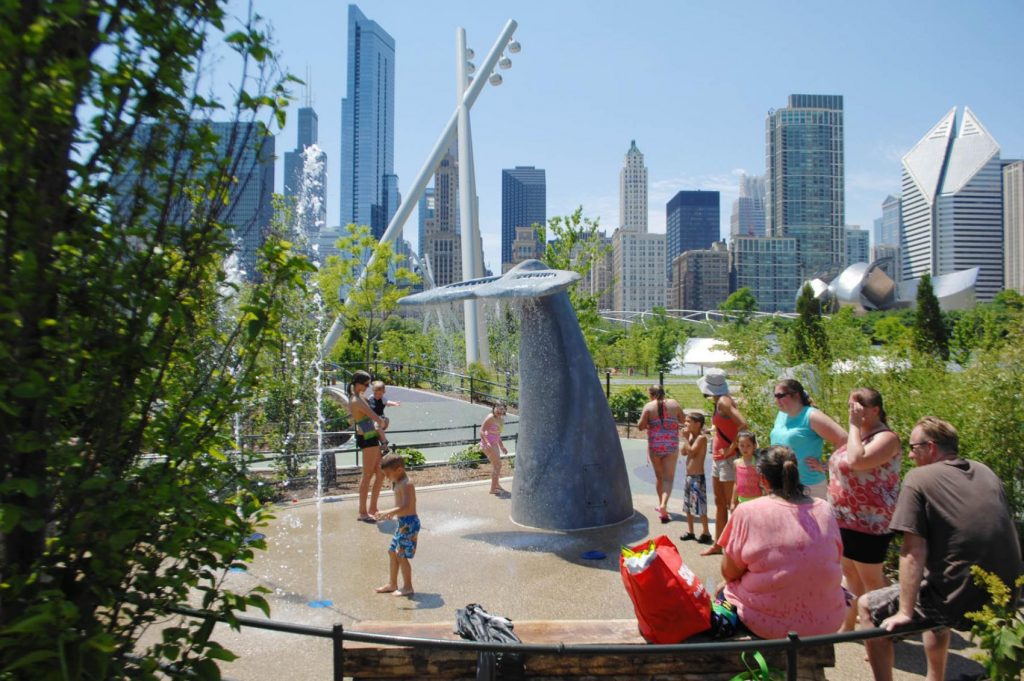 We’ve mentioned this park and play garden by Michael Van Valkenburgh Associates before, but its bold scale and imagination make it worth a second look. Inspired by the surreal fantasies of Alice in Wonderland and Charlie and Chocolate Factory, the custom-designed play structures and sculptures are an absolute delight for children. The Watering Hole” is a 1,200-square-foot animal-themed play space for children ages 2-5 with animal figures that can be climbed on, pet, talked to, or otherwise engaged. The Enchanted Forest offers distortion mirrors and a tangle of bamboo and sumac to convey the lush, disorienting feeling of being in the jungle. There are a number of other areas, The Harbor, The Wave Lawn, the Sea – but the Slide Crater may be the play garden’s crowning achievement, a 12,000-sqaure foot topography of slides and hills which surround a wobbly rope-tethered suspension bridge. Tall climbable minarets on either side of the bridge lead talk tubes, a viewing scope, and a 50-foot-tall tunnel slide. It is frankly, amazing, you don’t have to pay for admission. 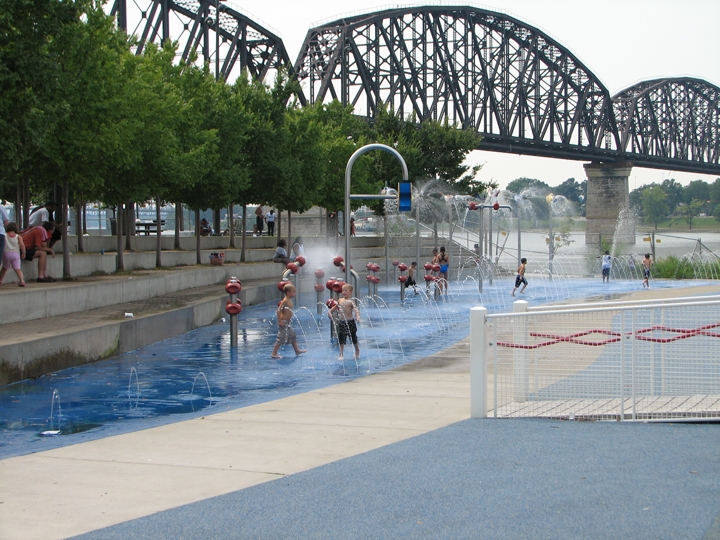 Louisville Waterfront Park. Louisville, Kentucky
There is good reason why Louisville Waterfront Park’s two playgrounds —the Children’s Play Area and Adventure Playground — have drawn enthusiastic attention from designers, including Site Design Group’s Hana Ishikawa. On the site of a former river-crossing for “migrating buffalo seeking the salt-licks and nutritious cane of the Kentucky region during the winter,” the wharf site on the banks of the Ohio River has survived war, railroad expansion, and near abandonment to become a beloved community gathering place and front door to Kentucky. The Adventure Playground/Waterplay Area, completed in 2004, includes large steamboat and bridge play structures, spray misters, water cannons, and a climbing pyramid that offers lovely views of the river and surrounding park. 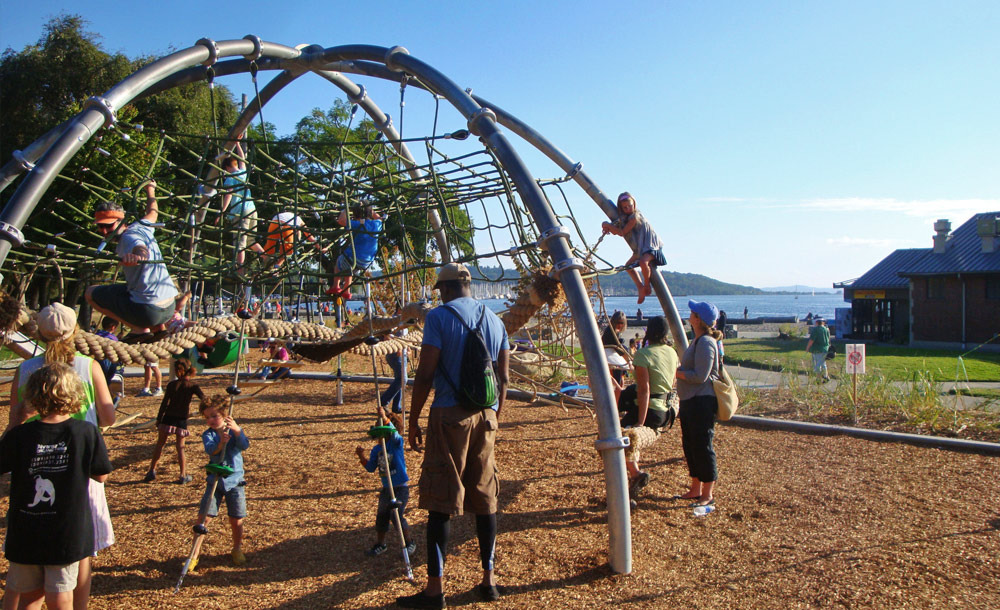 Golden Gardens playground. Seattle, Washington
Seattle has no shortage of fabulous parks and playgrounds for children, many of them inspired by the natural surroundings and offering lovely views of Puget Sound and the Olympics. One that emerges on several parenting magazine’s best-of lists is the ultra-modern Golden Gardens playground by the landscape architecture firm HBB. Located in the city of Ballard, the playground looks onto a beach and marina beside the Puget Sound, providing what one smitten parent calls “an incomparable view on a sunny Seattle day.” With three separate play structures and two separate swing sets, there is plenty for kids of all ages to choose from. A pirate ship climbing structure features a double slide and is geared to the younger crowd, while a giant webbed dome is designed for older kids. While there, you can make a day of it and visit two wetlands, stroll the rugged coastline, and play in the sand of a restored beach.

Governor’s Island, New York Harbor
At least two things are made better by hills: waterfront views and slides. Governor’s Island in New York manages both in ten acres of parkland accessible by ferry from the Battery Maritime Building in Lower Manhattan and Pier 6 in Brooklyn Bridge Park. Made of savaged debris, clean fill, and lightweight pumice stone, the park’s four hills offer breathtaking views of the New York skyline, including the Statue of Liberty, while thrilling children with long, curving metal slides built into the constructed landscape. Stone steps made of granite from the island’s former seawall bordered by ornamental grasses and crisscrossing timber beams create fun, physically challenging natural routes to the top of the hills. If you visit the isle, be sure to check out educational programming hosted by the National Park Service at the island’s two historic forts and a new Kickstarter-funded adventure playground comprising loose junk (wooden planks, old tires, broken treadmills and strollers) and tools (saws, hammers, and nails ) and supervised by play workers. 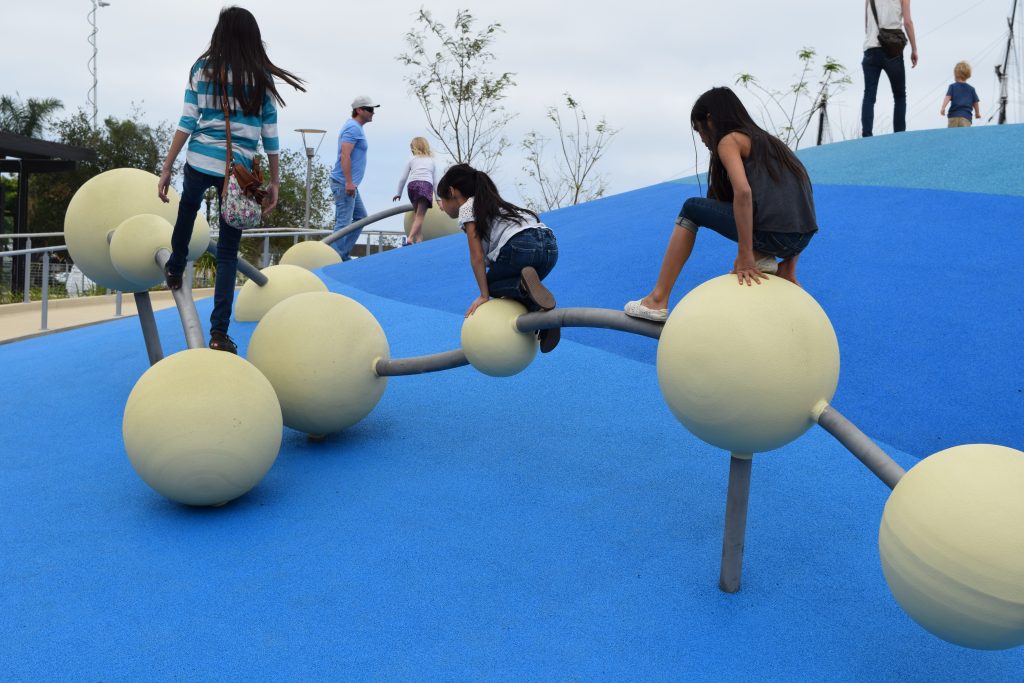 Waterfront Park children’s playground, San Diego
In its nomination for an Orchid award, The San Diego Architectural Foundation praised San Diego’s new Waterfront Park as a huge step in the County’s plan to activate its waterfront and increase public spaces. In place of 8 acres of parking lots is a 12-acre park complete with an 830-foot-long recirculating fountain and wading pool, grassy hills with views of the bay and downtown skyline, and an architecturally graceful children’s playground designed by Schmidt Design Group. The blue and grey rubber-surfaced playground includes climbable white “pearls” strung together by tubular steel, a popular spinner, large climbing mounds created with lightweight polypropylene foam, and dedicated spaces for public art. On the north side of the County Administration building lie a series of contemplative gardens that celebrate the diversity of drought-tolerant plant species that thrive in the region, including camphor trees, magnolias, queen palms, and jacarandas, and Senegal palms. All in all, a remarkable achievement.