Yesterday, while scrolling through some photos, I came across one that made me smile, a candid shot of my son and his newfound playmate scrambling over riding horse structures at Indian Boundary Park, a 13-acre park in Chicago’s West Ridge neighborhood named for an actual boundary line between the US government and the Pottawattomie Indians.

The park has an intriguing story. In addition to marking the historical settlement boundary set forth in the Treaty of 1816, it includes a lovely 1929 Tudor-Revival fieldhouse, designed by Clarence Hatzfeld, which is on the National Register of Historic Places, along with a timber-beam, adventure-style playground whose skyward jutting minarets conjure the silhouette of a Persian castle. There is a wetland area where ducks swim in rows, a prairie style garden, and a large open lawn shaded by burr oaks and Eastern redbuds. In addition, the park is home to a newly built nature play center, recognized by the Chicago chapter of the Urban Land Institute with a 2015 Vision Award. Here’s a look at some ideas worth borrowing. 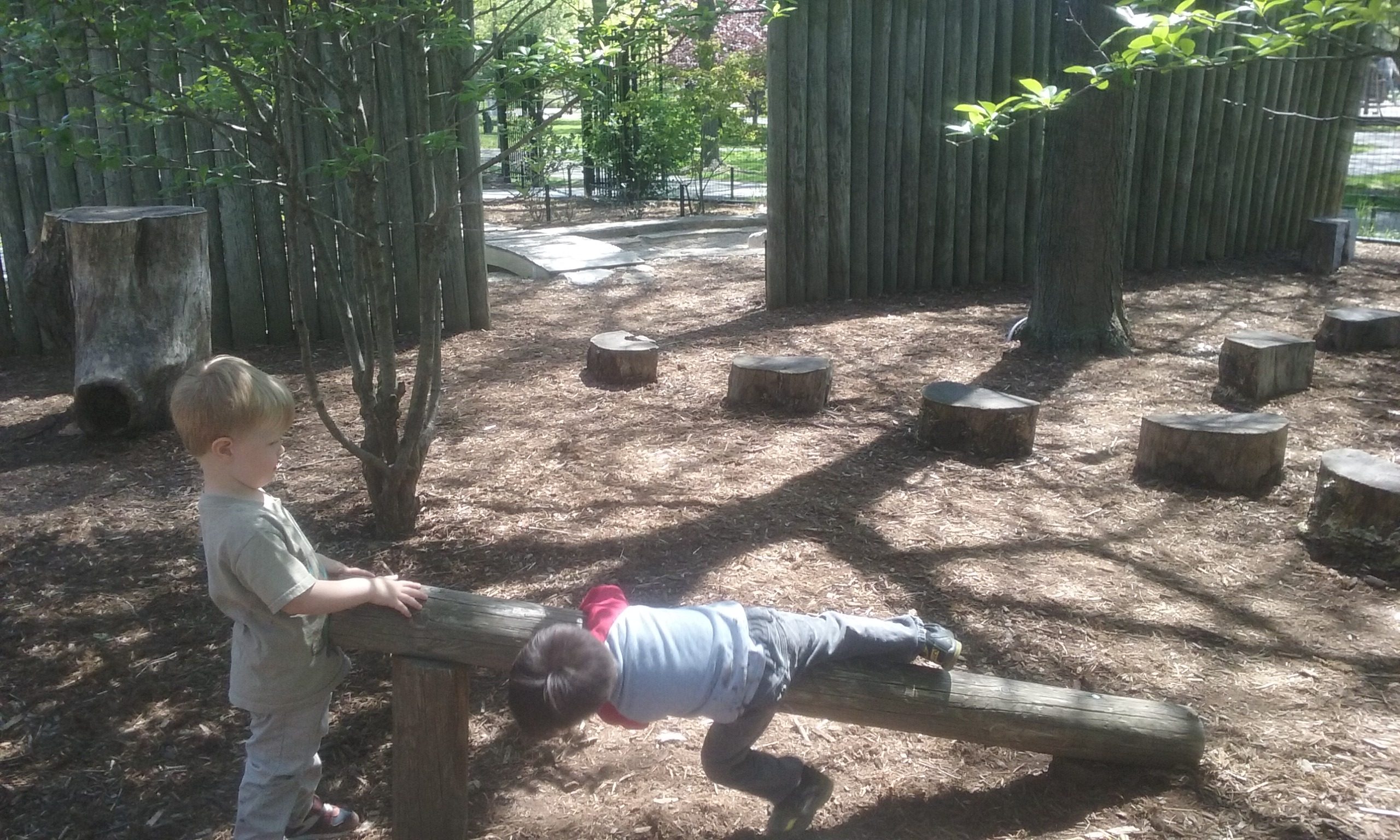 Reuse natural materials
As part of the Indian Boundary project, the Chicago Parks District re-used existing cedar fencing and posts to create improvised structures that suggest various modes of play without being overly prescriptive. Some look a bit like riding horses, though my son insisted they were rocket ships bound for space. That possibility seemed just as feasible. One of the benefits of natural materials is they lend themselves to symbolic representation because their forms are abstract. Beyond the L-shaped structures lay a checkerboard grid of tree stumps serving a similar effect. Whether imagined as lily-pads in a rushing river, traffic lights, or literal tree stumps, they create a cleverly defined zone for active games and group play.

Build tiny houses or willow shelters
Beyond re-use, the project called for re-purposing many existing elements, such as the swan huts, a popular feature of the former petting zoo. Stylized as hamlets in a fairy tale village, the huts are well shaded by the existing tree canopy and offer children an escape not only from the sun, but the more active play areas of the nearby adventure park. Clusters of snapdragons and day lilies interspersed among the tiny houses set a cheerful mood and are well adapted to the native ecology. In the northwest corner of the play area, a dried willow hut offers a more open form of shelter, while celebrating the legacy of the Native American tribes who once occupied the region. 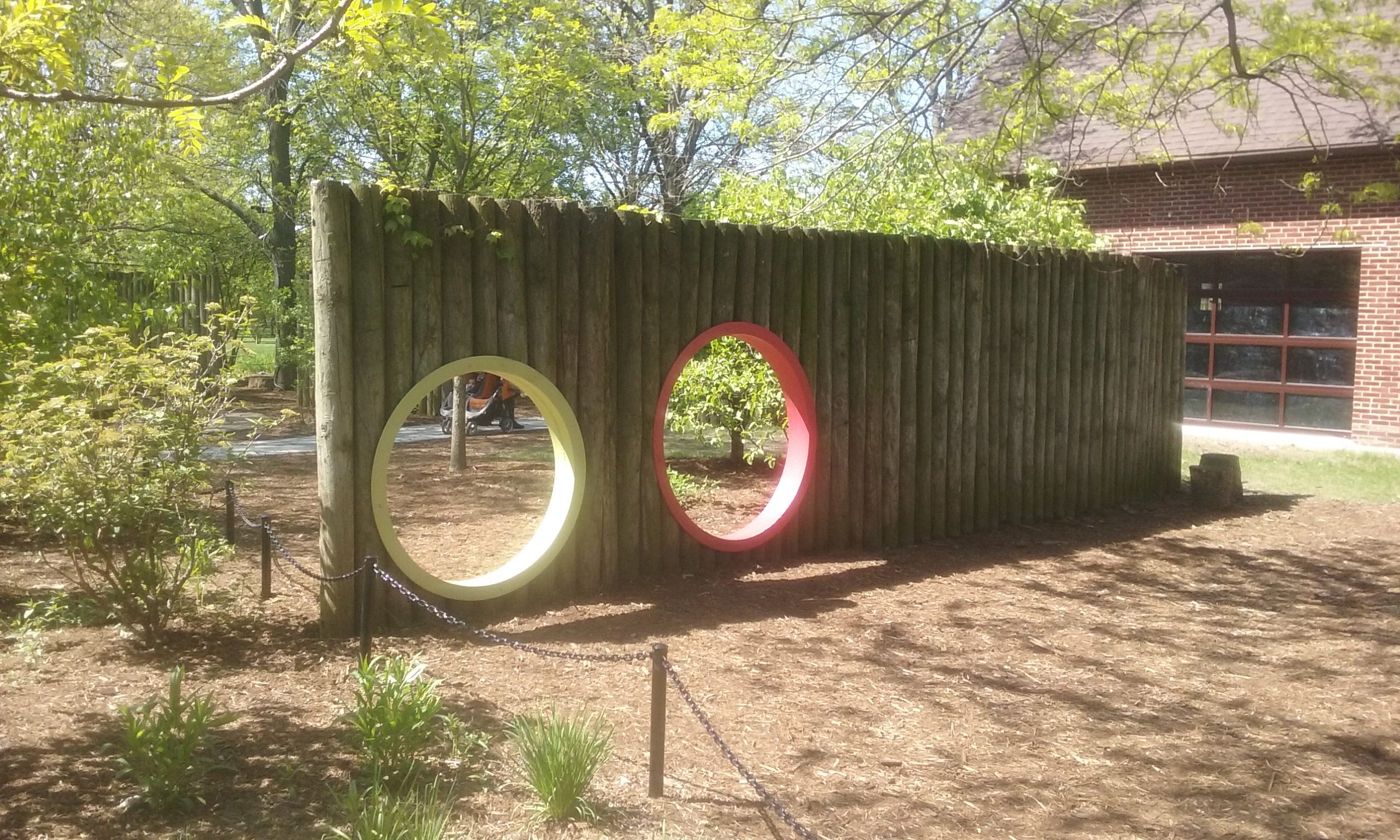 Rethink the function of fencing
Fences serve an important function at playgrounds, establishing a clear boundary and ensuring the safety of children by keeping them contained. In the context of a nature playground, however, they can be re-conceived as an element of play that invites mischief and playful deception. What I admire about the design of this fence is the way it suggests a cat and mouse game, where children can slip through the holes to the “forbidden” side without actually doing anything dangerous. Unsettling the traditional notion of a fence as a restrictive barrier, the structure sends the message to children that this is a playground designed for them, not the adults. 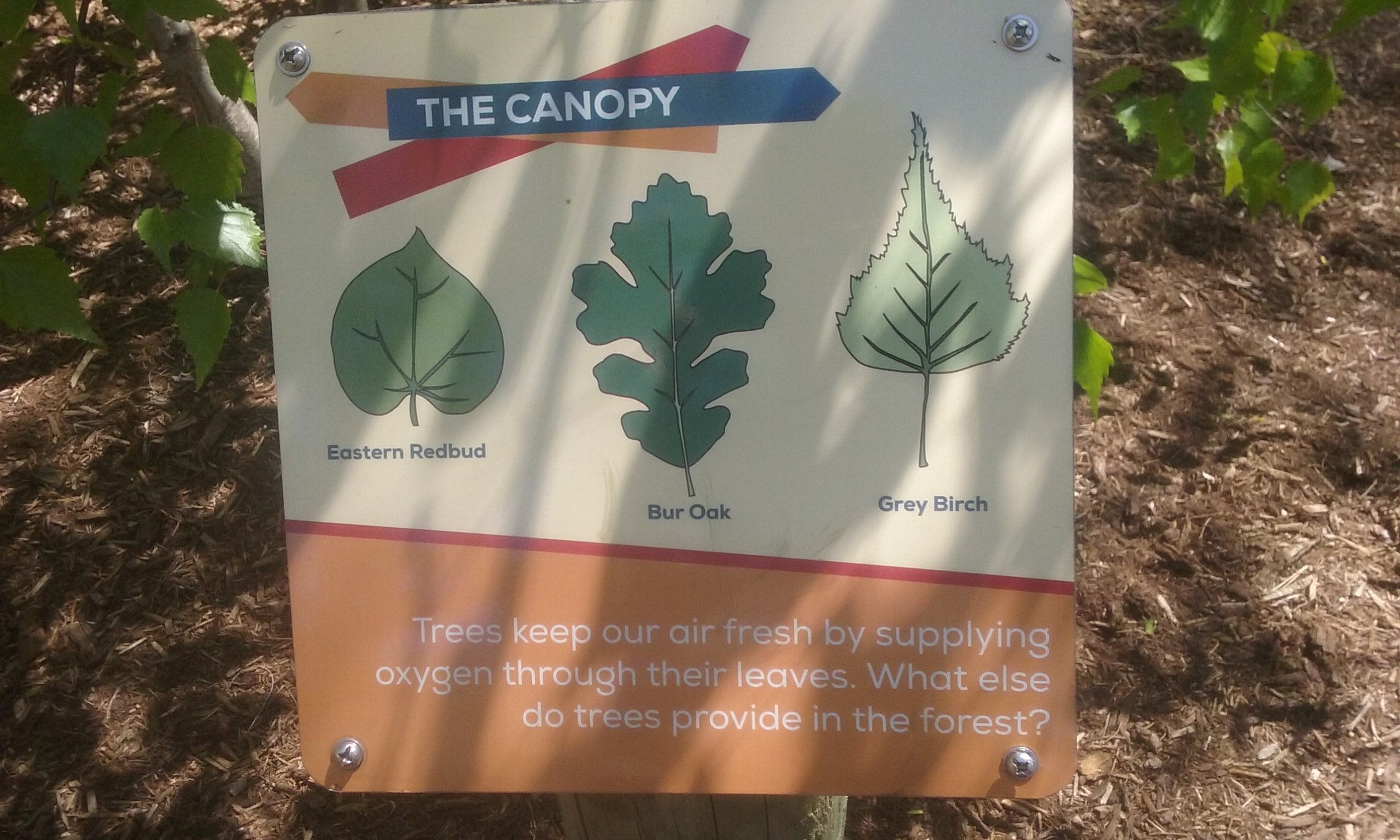 Incorporate educational signage
The world around us is increasing legible. From the palm of our hands, we can retrieve virtually any fact in seconds. We can search for the make and model of an obscure part of a washing machine, read half a dozen accounts of a quaint historic town, or learn more than we ever wanted to know about a platypus. Still, it is relatively difficult to uncover the names of plants we see every day. To that end, nature play areas present a great opportunity to provide plant and wildlife identification labels and simple descriptions of natural phenomena. My son cannot yet read, but he is old enough to recognize visual differences in leaf shapes. After perusing the sketches of grey birch, burr oak, and eastern redbud leaves, we walked around the park and tried to find their living versions in the branches above. Reading him the simple, open-ended query, “Trees keep our air fresh by supplying oxygen through their leaves. What else do they supply?” prompted an expanded conversation about the use of trees in paper, houses, guitars, and boats. 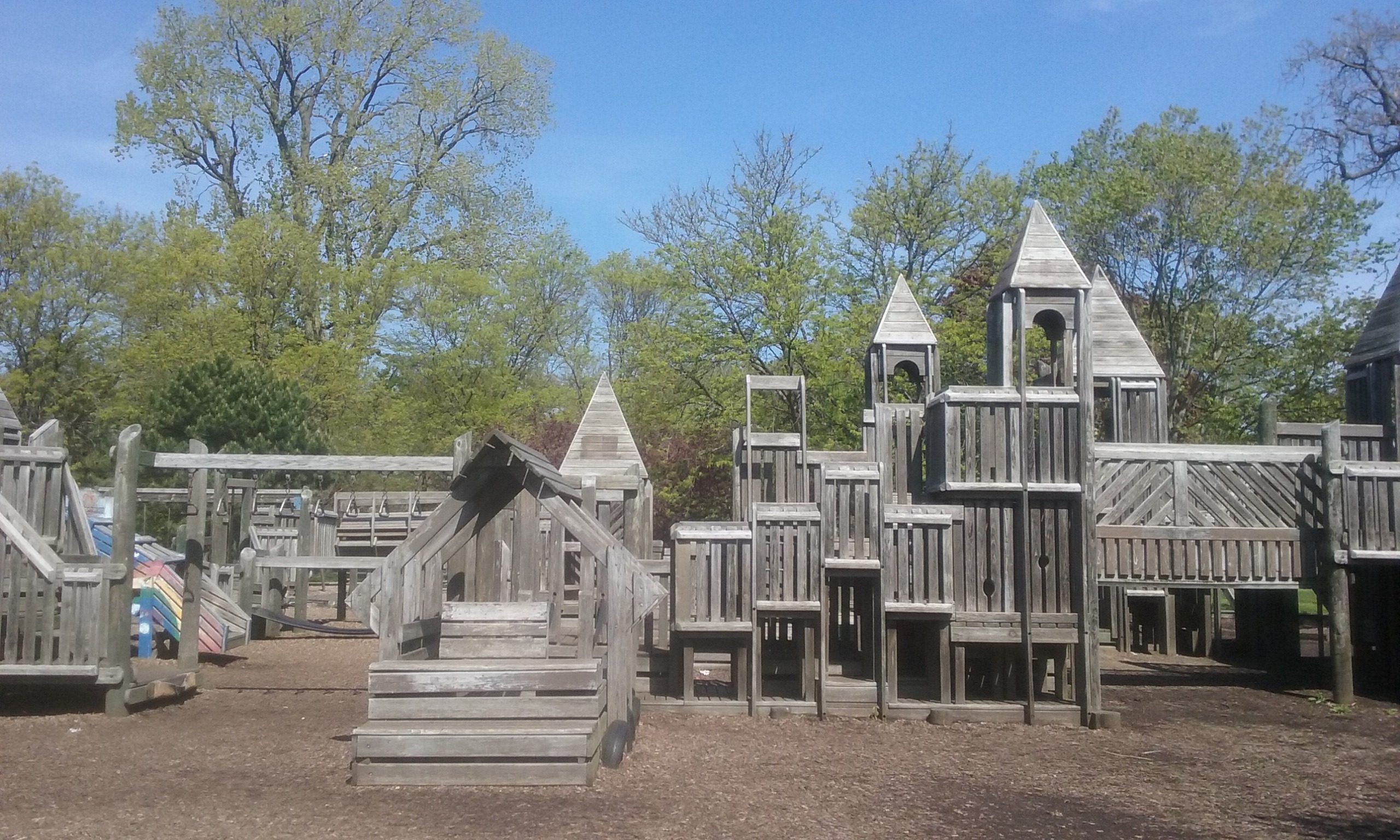 Consider the whole site
Part of the reason the nature play area at Indian Boundary Park is successful is because of its easy integration into the park’s broader design. The nature area is located beside a sprawling adventure playground with swinging bridges, rings, climbing structures, and slides, and a large splash park where powerful jets of water spray from the mouths of sculptural bears. When children want to cool off, catch their breath, or just relax in a more secluded space, they have options. They can head to the nature area for a make believe game in the fairy house, go searching for butterflies in the prairie garden, or walk to the wetland to gaze at ducks, frogs, and surfacing turtles.

Foreground the tactile
At early ages, children want to touch everything. What’s hard about that, for parents, is they can’t, at least not in cities such as Chicago where everything includes broken bottles, used candy wrappers, and stuff that’s worse. One of the reasons playgrounds are so liberating for children (and an emotional reprieve for parents) is they are a place where it is acceptable, even encouraged, to investigate the material world. At Indian Boundary Park, time- and moisture-worn timber, the papery bark of birches, the spraying jets of fountains, and the rough-hewn stones of miniature houses are all wonderful tactile sensations for children to explore.