Six years ago, students and staff at Amigos School, a pre-K-8 Spanish and English immersion school in Cambridge, Massachusetts, moved into a new home. The former administrative building at 15 Upton Street had good bones and the size to accommodate more than 400 students from across the city, but there wasn’t much of a playground: a wooden and plastic play structure for preschool aged children, some painted four-square and hopscotch areas, and a web climber.

However, when the school was chosen as a funding recipient through the city’s Healthy Parks and Playgrounds initiative, principal Sarah Bartels-Marrero saw an opportunity to “essentially share our hopes and dreams for a space that would engage and entertain children.” She envisioned a distinctive playground that would encourage movement and collaborative play across age groups.

The school had a budget of $500,000 and a bold vision. But with the desire to preserve rear parking and a popular basketball court, there wasn’t much room to build: a fence-enclosed 200-foot-long paved play yard in front of the building’s main entrance was the only real option for whatever was to come. 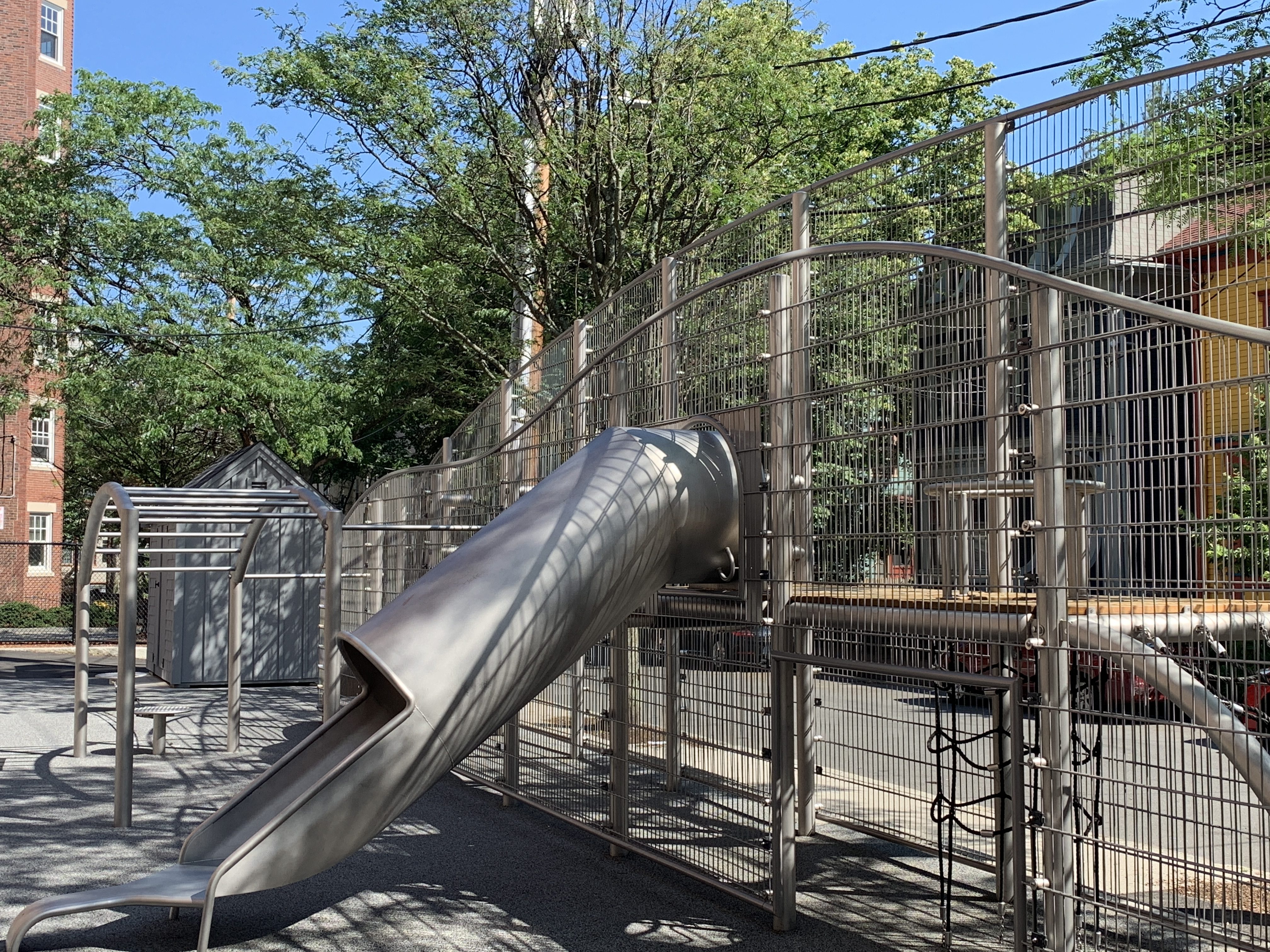 Committed to her idea, Bartels-Marrero sought the help of the city’s landscape architect, Rob Steck, and Goric founder and president Rick Henke to develop a creative solution. Working in close collaboration, the two developed an unconventional but elegant plan: incorporating a gridded-steel fence into the playground, not only as a boundary between the school grounds and pedestrian walkway, but also as a play element.

“The issue was there was no space. I came up with the idea of building the playground all along the fence. It follows the contour of the playground, not just in a straight line but with curvature at the top, always at least 8 feet above where children will be standing,” Henke says.

Henke sketched the idea by hand and, after being converted into a digital design format, the self-contained stainless steel and wood course was manufactured in Germany by the company Spiel-Bau. Tube slides, rope ladders, arched podium climbers, climbing nets, and a suspension bridge are integrated into the structure to promote active play and help children improve their coordination, agility, and balance. 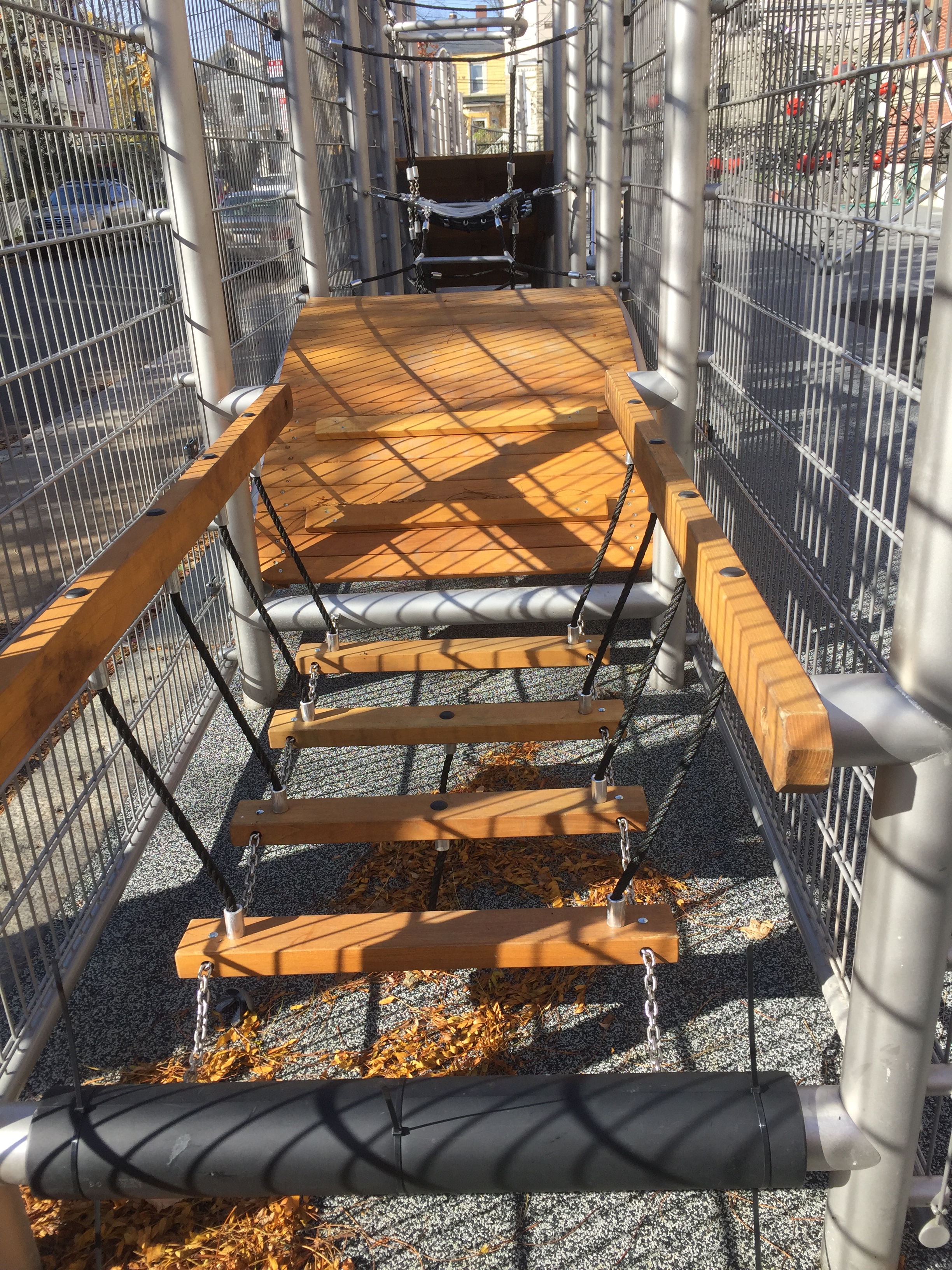 Origins in Parkour
The navigational layout of the course borrows tenets from Parkour, a training discipline originally developed by Raymond Belle and the Yamakasi in France. Derived from military exercises but adapted as a fitness regimen for athletes and the general public, parkour bears resemblance to a martial art, with a coordinated sequence of running, climbing, swinging, crawling, jumping movements working to condition the body and mind.

The origins of parkour are interesting. Belle lost his father in the First Indochina War and was separated from his mother and sent to a military orphanage in Da Lat. There, he trained in secret after dark, running, climbing trees, or using the military obstacle course to test his physical limits. Though he was largely uninterested in sports clubs and school, he developed confidence and strength through the disciplined repetition of exercises, eventually joining the Paris Fire Brigade, a French army unit, at age 19.

Parkour’s focus on overcoming challenges and taking calculated risks resonates with much of the discussion taking place among play advocates and childhood development researchers today. Later life success, the thinking goes, relies on early childhood experiences enduring and mastering small hardships to build confidence and resiliency. The course allows children to gain these important early life experiences, while being conceived in such a way as to ensure fall safety and protective enclosure. 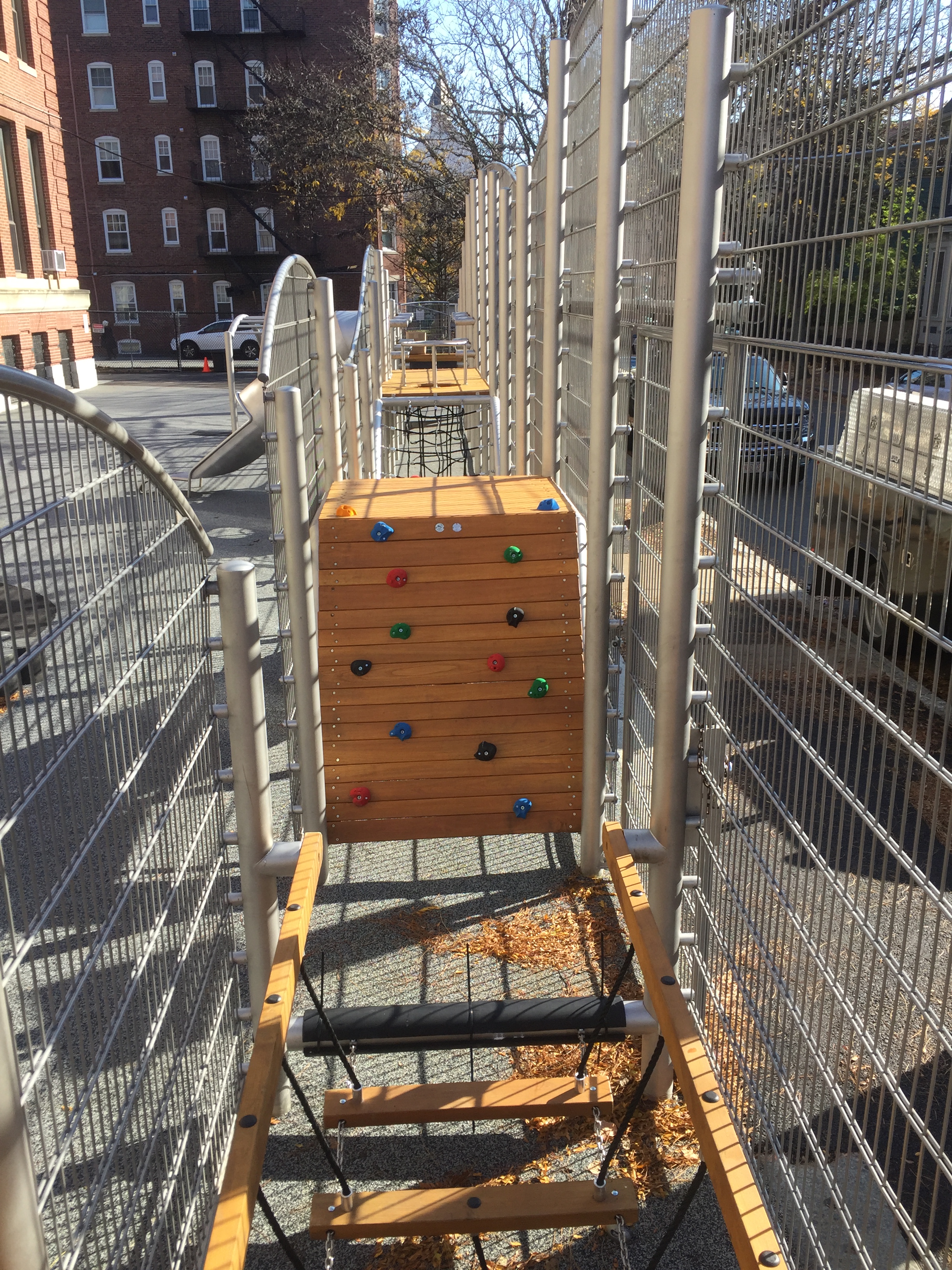 Happy Kids
In addition to being challenging and multi-functional, the design of the parkour structure is stunning. A long thin sequence of architecturally connected spaces contain obstacles children crawl and climb through as they make their way from end to end, or take a detour, exiting the structure from a slide or ladder. The muted colors integrate well against the historic brick building and mature surrounding neighborhood.

Used by students throughout the day for recess and outdoor activities, the playground is open to the public during non-school hours and is a popular destination for families on weekends, Bartels-Marrero says. So far, the response from students and the community has been overwhelmingly enthusiastic. “What I enjoy the most is the happiness the kids have when they’re out there. Seeing them come inside with eyes like saucers, saying ‘Wow this is so cool.’”