Just off Halsted Avenue, on the campus of the University of Illinois Chicago, sits the Hull House, an unassuming, low-gabled brick building that was once the private home of Jane Addams and the heart of the Hull House settlement. The residence first built for Charles Hull in 1856 has been preserved as a museum and reveals Addams’ inspiring story—that of a tireless writer, philosopher, suffragist, and child’s rights advocate, who was not only America’s first woman to be awarded the Nobel Prize, but deemed by Theodore Roosevelt, “the most dangerous woman in America” due, in part, to her opposition to war.

The building contains extensive artifacts and research records—from  thick FBI files on Addams’ anti-war efforts to the burgundy Victorian-era velvet dress Addams wore on an overseas meeting with Russian writer and pacifist philosophy Tolstoy. As the residence for roughly 100 people at a time, the Hull House and the 12 surrounding buildings of the settlement served as a cultural center and haven in Chicago’s Near North Side, a place where families, many of them European and Mexican immigrants, could take courses in music, art, and theater classes, and find escape from the long hours and poor working conditions ushered in by modern industrialization. 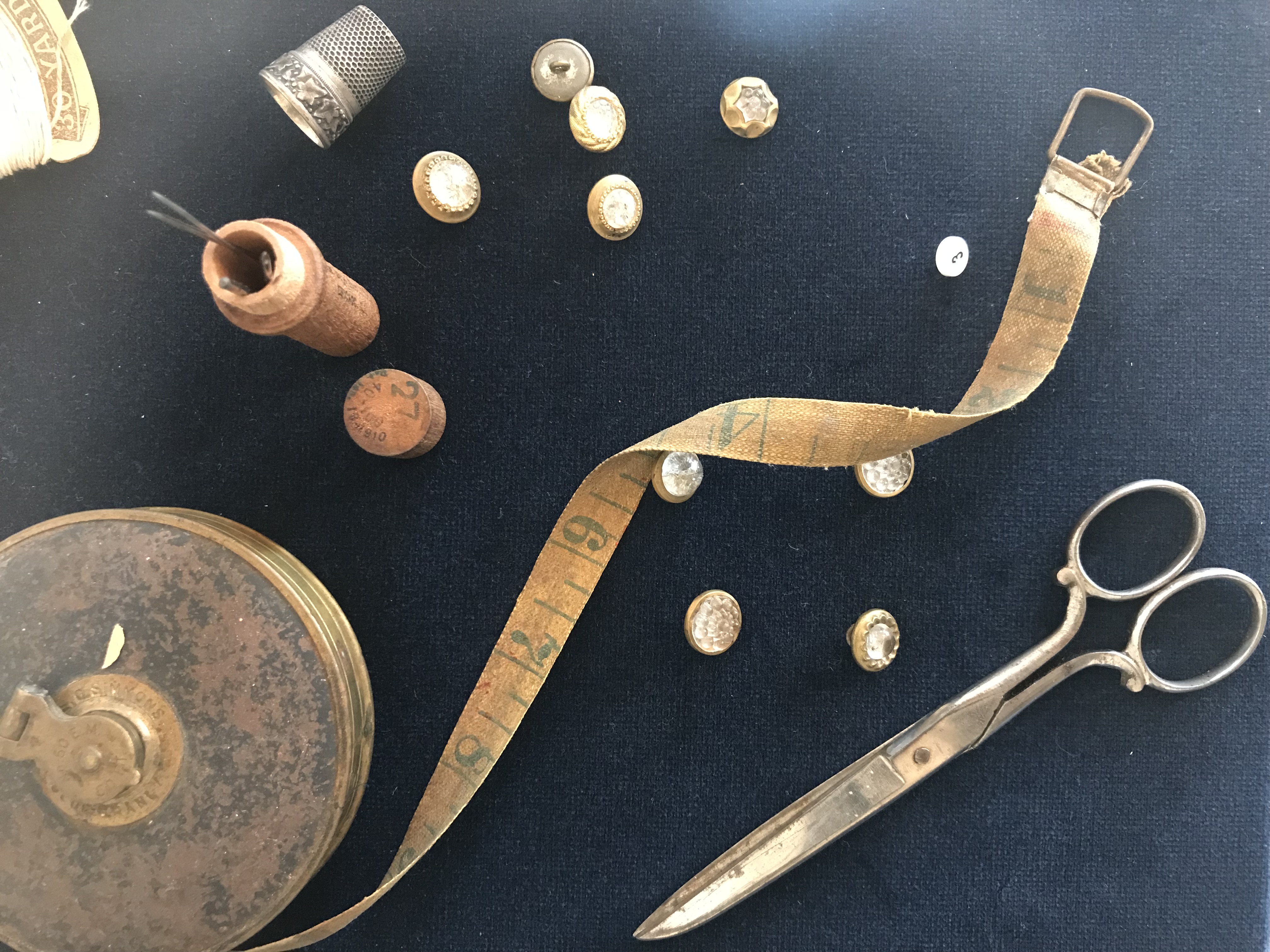 Addams was the daughter of a wealthy grist mill owner, Civil War officer, senator, and personal friend of Abraham Lincoln. After leading a privileged childhood in Cedarville, Iowa, she became part of the first generation of women to attend college. Her concern for the welfare of the poor led her to move to the Near North Side of Chicago with her college friend Ellen Gates Starr to live in proximity to those living in poverty. At the Hull-House settlement, they brought together some of the generation’s most talented writers, artists, and activists for a radical experiment in collective living. 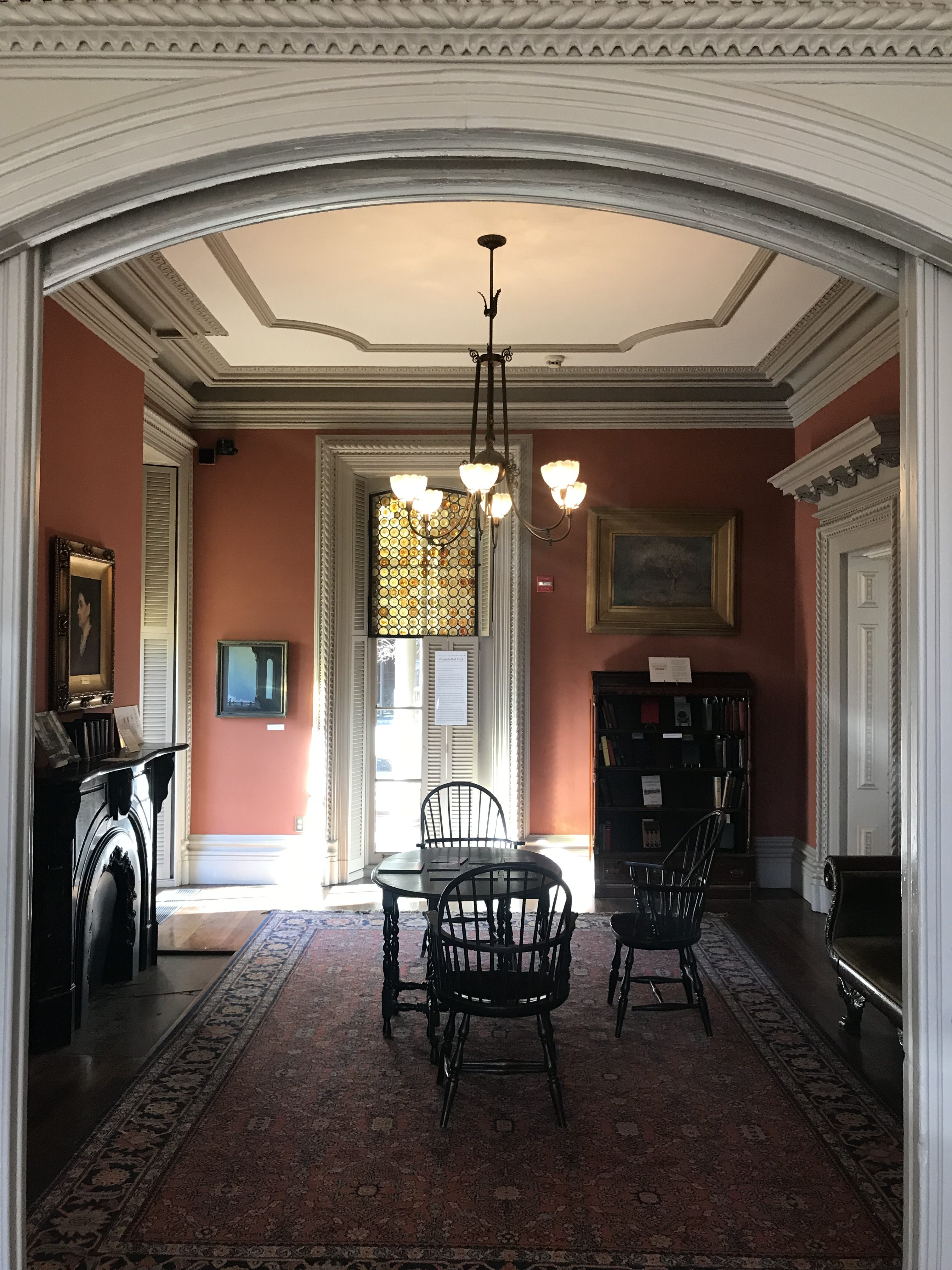 Residents of the village, who paid room and board and were voted in or out by other residents for sixth month stints, helped perform household tasks, answer phones, give tours, and supervise the gymnasium and playground. They shared collective spaces, such as the settlement’s dining hall and coffeehouse, and fought for immigrant rights, labor reform, juvenile justice, and improved public housing. Above all, they opened the door for women and non-native Americans to engage in dissent and social reform.

The living conditions of the Nineteenth Ward where the Hull House was located were a far cry from those that exist on UIC’s campus today. Research collected as part of the Hull-House Maps and Papers, a groundbreaking sociology study conducted by Florence Kelley and on display in the museum, reveals some staggering facts: Inside the impoverished community, 40 percent of children did not live to the age of 5; diphtheria, smallpox, and scarlet fever were rampant; many tenements had wooden outdoor privies in place of toilets, and domestic workers logged 12-13 hour days at less than $.04 an hour. 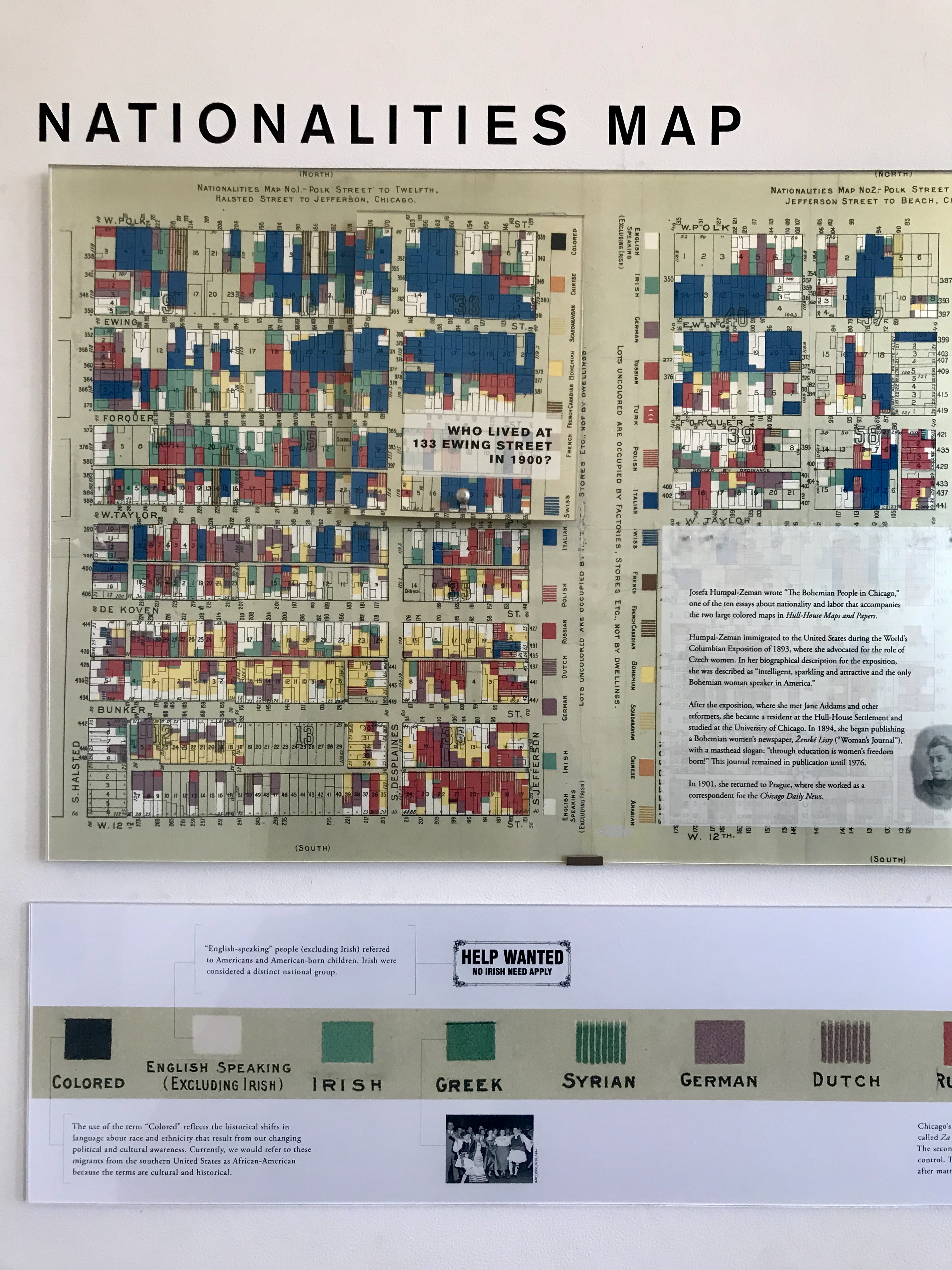 The most affecting anecdotes are those pertaining to the children. As one display reads, “Many of the boys would start working at 2:30am to secure the first edition of the morning paper. They did not attend school and spent much of their time on the streets. Florence Kelley and Alzina Stevens describe them as ‘ill-fed, ill-housed, ill-clothed, illiterate, and wholly untrained and unfit for any occupation.’” For many, school was simply not an option. Of the 6,976 school-aged children living in the Nineteenth Ward, only 2,957 were offered seats in the public schools, despite a statewide compulsory education law.

These conditions help explain why Addams fought so aggressively for labor reform and juvenile justice and why the Hull House grew from modest beginnings to include an extensive battery of youth and family programs. What began as “a kindergarten and a room for the mothers to be able to sit and talk” according to the Play and Playground Encyclopedia, expanded to include “a club for teenage boys, cooking and sewing lessons for young girls, lectures by university teachers and students, local culture nights, and a loaning library of art reproductions.” By 1907, The Hull House settlement included “a swimming pool, book bindery, art studio, music school, circulating library, employment bureau, labor museum, drama group, and a cooperative boarding club for girls.” 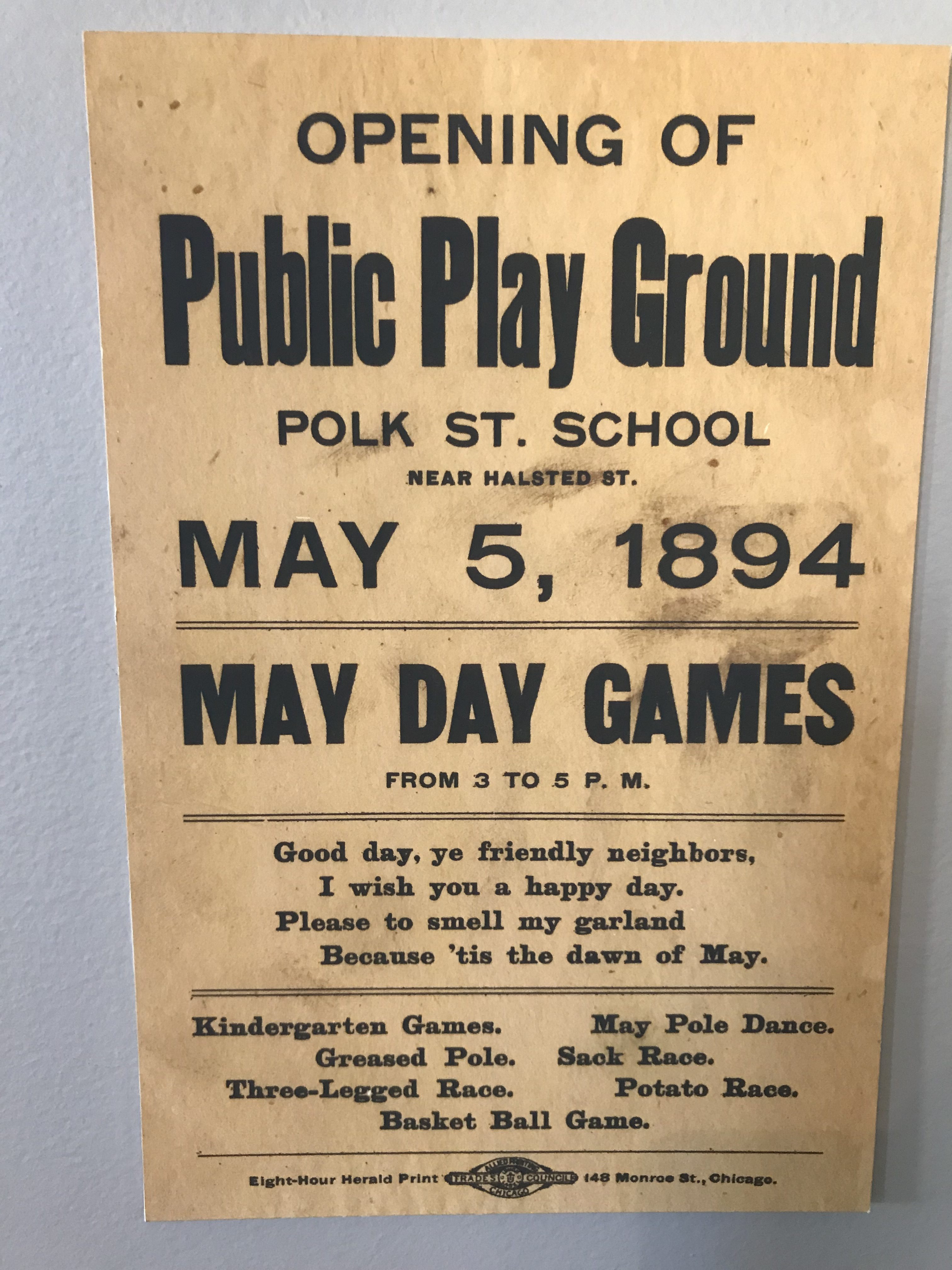 Original advertisement for the opening of the Hull-House Playground

The model playground opened on the settlement in 1894 was the first of its kind in Chicago. Eliminated after Chicago philanthropist William Kent sold the property in 1906, the playground lives on in historical photographs as a testament to Addams’ belief that play constitutes a core part of a child’s social and emotional development. Located on nearly an acre of open space, the playground featured sand play areas, building blocks, and outdoor game areas—many of the free play elements that are once again coming into vogue. One of the early playground equipment pieces, a giant stride, which was a tall pole from which ropes were suspended from a revolving disk, has returned in the design of modern stainless steel spinning platforms, with cables extending from the circumference of an elevated rotating disc to a pyramidal spire.

Modern urban development plans that prioritize the inclusion of safe, outdoor playgrounds also owe a  debt to Addams’ early work. A fervent critic of turn-of-the-century industrial cities that failed to incorporate adequate play spaces for children, Addams believed playgrounds were not only important in satisfying children’s innate need to play, but also deterrents to delinquency and crime. “Recreation is stronger than vice and recreation alone can stifle the lust for vice,” she wrote in her book The Spirit of Youth and the City Streets.” Beyond playgrounds, Addams felt play and recreation should be infused in al aspects of civic life, from public assemblies honoring the birthdays of heroes to tree plantings and dances.

Thank you, Ms. Addams, for all your stellar work.

Rediscovering What Matters Most

A Plan for Your Elder Playground