If increasing urbanization and limited housing stock has led to a wave of micro-units, rooming houses, and residential hotels in spatially constrained cities such as New York and San Francisco, there is a corollary in the world of playgrounds. For lack of a better term: the micro-playground.

These compact designs, which typically fit on footprints under 2,500 square feet, might well have brought a gleam to the eye of children’s playground advocate President Theodore Roosevelt. Roosevelt, once the president of the Playground Association of America, knew the importance of play for children (calling it a “birthright”), even at a time when space to build playgrounds was comparatively abundant. Now, as cities grow more crowded and residential lot sizes shrink, there is, arguably, an even greater case to be made for the need for playgrounds, particularly small ones that can make the most of a tight space. Here we’ve compiled a short list of exemplary projects, as well as strategies for working small.

Go Vertical
The Wallholla, a bright orange play structure designed by the Danish firm, Carve, continues to gain popularity since it was first designed in 2005. The vertical orientation not only preserves space in a small park or schoolyard, but also allows for the layered arrangement of crawl-spaces, as well as providing exercise to promote good health and development. The enclosed space encourages collaborative games. It is offered in standard lengths of 28’, 40’ and 56’ feet, and can be customized to spec. 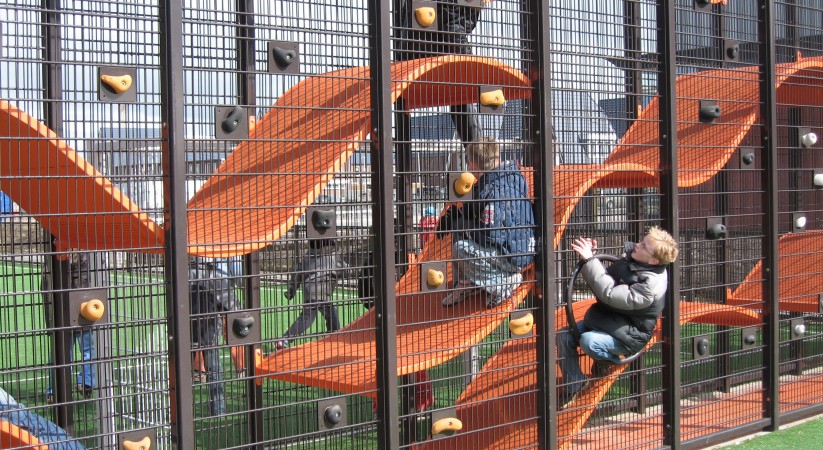 Integrate Freestanding Pieces
Goric offers several freestanding pieces that can be used on a small footprint to optimize space. One popular modern design is a gently arched climbing structure called the Spaghetti. The sculptural design is sleek, compact at the base, and easily installed on a variety of surfaces. Because it is low to the ground, at a fall height of 4’, it provides opportunity for a good upper body workout. Children as young as five years old can use the structure for pull-ups, swinging, or exercising the core. EUROFLEX® steppers are another great way to encourage muscular strength and coordination. Made of recycled rubber, these tree-stump-like columns have a use zone of just under 13’ in diameter, making them a nice addition to a small space, either arranged like staircase steps or on an undulating gradient.

Incorporate Loose Objects
Architect David Rockwell’s widely publicized Imagination Playground at Burling Slip in New York City is a fine example of how loose parts may stimulate children’s creativity and independent thinking. While the playground, priced at more than 7 million dollars, is anything but small, the playable hardware found there could easily be used in closer quarters. From lightweight blocks and cogs made of blue molded foam, to wooden wheelbarrows, tires, and plastic barrels, the playground is premised on the idea that the unscripted nature of free play using everyday objects forces children to deal with the social challenges of sharing and collaboration and solve open-ended problems. As Darell Hammmond, chief executive officer of Kaboom said of the Imagination in a Box loose parts product line in a 2010 New Yorker article, “It is going to change the narrative about what is the best type of play for kids, and parents will start to demand those elements.” 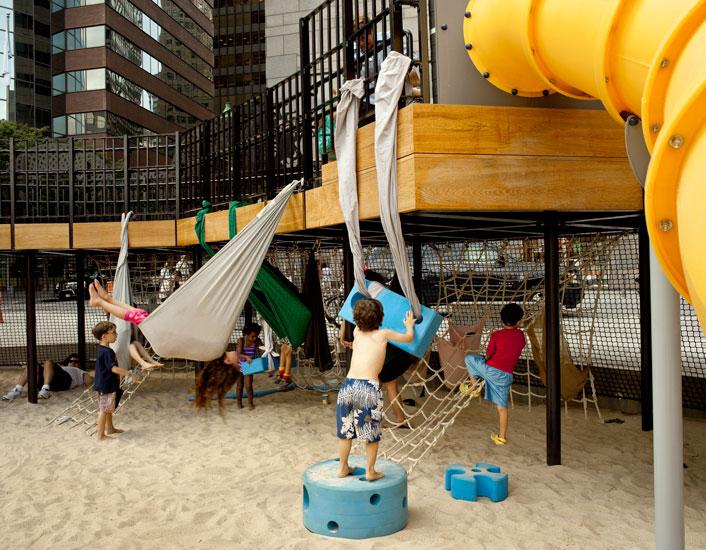 Experiment with Sculptural Forms
The designers (Five Fields, Matter Design, and Frisch) of a new experimental play structure in Lexington, Massachusetts, turn the whole notion of the small neighborhood playground on its head. As they write in a recent news release, “The thing is, the act of play is inherently indeterminate. Play cannot be reined in by a specific set of verbs. Play is liberation, but also irresolution. So how does one design for ambiguity, but also childish experimentation?”

The team’s compact wooden playspace, as found at the top of this post, appears to draw inspiration more from the dimensional prairie-style architecture of Frank Lloyd Wright than the frame and platform structures seen across North America. In a nod to and continuation of an affordable housing development designed by the Architects Collaborative (TAC) in the early 1950s, the structure is intended as a work of collective imagination, a sort of Rorschach test of play, that leaves open the questions of what it is and what to do with it.

Use Pour-in-Place Rubber
Pour-in-place rubber surfacing has benefits that go well beyond ensuring safety when children jump or fall to the ground. For areas below and around playground equipment, Goric supplies the EUROFLEX® product line consisting of protective rubber tiles/slabs and poured in place (“Insitu”) surfacing as well as resilient pavers, curbing, and sports tiles.

EUROFLEX’s alphabet, number and theme slabs, as well as a new EPDM glitter tile, can be used as a canvas for educational games of counting, letter and animal identification, and hopscotch. Easily customized to spaces of virtually any size, these rubber tiles can be arranged in patterns to enhance outdoor learning at schools and day care facilities, provide floor covering in nursing homes and rehabilitation centers and create colorful, and create ADA accessible walkways.

In topographical designs, poured-in-place surfacing can perform dual functions, serving to attenuate impact in fall zones while offering the elasticity to form a cushioned surface layer over small mounds. A Playa Vista, California playground by The Office of James Burnett, featuring bright green Kraiburg “Insitu” rubber surfacing, is among many examples of the firm’s use of poured-in place surfacing to turn a confined area into a wonderful play space. 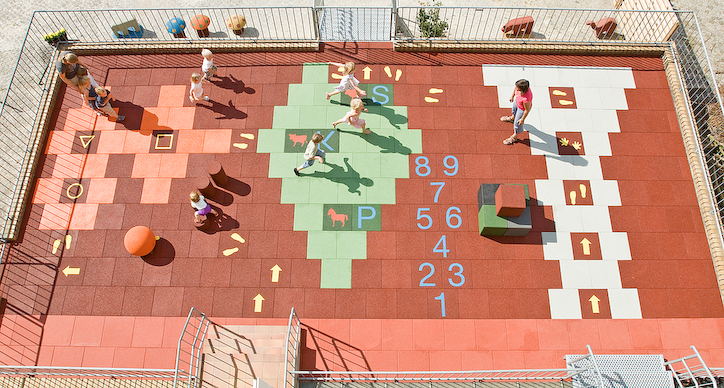 Activate the Senses
Some of Goric’s most popular offerings for use zones under 15’ by 15’ are installations intended to promote children’s sensory development. For the musically inclined, the Babel Drum, Cajon, Sound Column, Rain Maker, and Whisper Dish are terrific choices. For the kinesthetically motivated, the Dancer, Jumping Disc, Whirlwind, Swivel Chair, and Spoon promote balance and muscle coordination in contemporary designs adaptable to almost any sized space. To encourage collaboration, coiled spring toys such as the Double Seater and spinners like the Windsurfer invite use by several children.