When Minnesota’s Three Rivers Park District sketched out the plan for updating an aging playground, there was no question it would include a zip line. 600 kids and their parents made that clear when they were asked for suggestions.

Describing the old zip line as a “beloved element of the original play area,” the district said there was no doubt it “should be re-created in the new one.”

So there it was on opening day, June 12, a brand new 100 foot long, Goric Double Cable Ride, sturdy enough for kids and their parents.

“That is one of the success stories of the project,” Chuck Evens told us. Senior associate with the award winning landscape architecture firm Damon Farber, Evens was the lead designer and project manager of the redeveloped Baker Park. 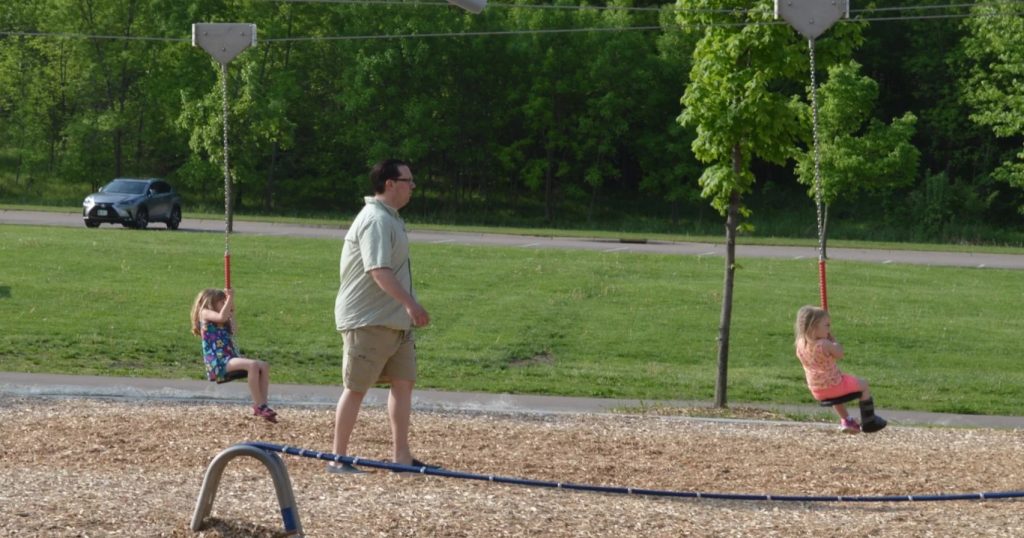 “That piece of equipment is functioning really well for them and fun for adults and kids alike to zip down that line and have a thrilling experience,” he said.

Indeed it is, agreed Camille Calderaro, of Fireflies Play Environments, herself a designer and landscape architect. She consulted with Evens on equipment for the project, recommending not just the Cable Ride, but several other Goric pieces including slides, a slack line, rubber climbing balls and spinner.

Beyond a doubt, said Calderaro, the zip line “is the most popular feature. That and the Seastar.” The Seastar, which she also recommended, is a huge, cable climbing structure rising a few feet in height and is the park’s most visually dominant element. Coming off one side is a customized Goric slide.

Few playgrounds have a zip line, fewer still have a Seastar. In fact, Baker Park may be the only park in the U.S. to have so many unique play elements.

“That was one of the guiding [design] principles,” Evens said. “This park had to stand out as something unique in the marketplace and not be your everyday typical school ground play area.

“We couldn’t just turn to the local manufacturer down the street, whose equipment you find in almost every school yard.”

That’s why he turned to Calderaro for advice. Damon Farber’s portfolio includes a broad range of urban, institutional and civic projects. Playgrounds are a small part of the business. Calderaro specializes in play.

Evens and Calderaro worked together on a previous project, the Trane All-Abilities Park, for which Goric also provided equipment. From that project and others, he knew Calderaro had access to a wide range of exciting and uncommon equipment, and with her background, could suggest the right pieces to match Baker Park’s three concept areas: preschool play for the youngest children, a perimeter play area for kids 5+ and a challenge course also for older youngsters.

“I got called in to help give a little more direction to the type of play opportunities, play equipment that would give the kids a variety of challenges,” Calderaro said.

Another of the park district’s priorities was to have the park be as accessible as possible. Certain features like the zip line aren’t, but many, and the overall park itself,  are, Evens said.

“Accessibility played a big part in the selection of the equipment,” Calderaro agreed. The Goric slides, for example, have a “dignity landing,” a transfer platform for children needing assistance in disembarking.

The final guiding priority was to have the small, almost 2 acre space offer  something for everyone. Evens admitted that was a particular challenge, as the emphasis was on young children. 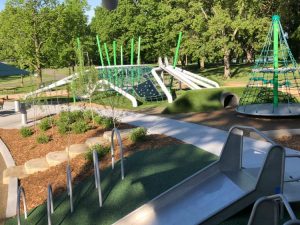 Still, said Evens, “We thought that the teenage crowd would be interested in the zip line, the challenge course that we put in there, and also the Seastar.”

It turns out those things are appealing to older children. Calderaro said she’s even seen more than a few adults take turns on the zip line. She’s visited the park a few times since the opening and says there’s always a crowd.

She spoke with many of the parents and the feedback is unanimously positive.

Evens agreed the playground has become an immediate hit. “I think the park has been wholeheartedly embraced. I’ve heard nothing but positive reviews.”

He’s proud of the uniqueness of the park, the range of equipment, and how well the playground’s design integrates into the typography and connects to the overall park itself.

“We put most of the dollars towards playability,” said Evens. “We got the most bang for the buck.

“We delivered on all of our challenges that were laid out before us. We delivered a park that will remain relevant for decades to come.”