Long before the coronavirus shut down parks and playgrounds, kids were hijacking streets and sidewalks and appropriating vacant lots to create their own play areas. They jumped rope, chalked hopscotch on sidewalks and turned any space large enough to build a cardboard fort into an impromptu battlefield.

The nation even sung a paean to playing on the “Sidewalks of New York.”

Then, TV and computers and video games happened. Kids began spending more and more time indoors; so much more that by 2018 just 24% were getting the recommended 60 minutes of daily physical activity. Two-thirds were spending more than two hours a day online.

Remarkably a national survey of parents with young children found a quarter of them admitting their 2-5 year olds spend 3 or more hours a day in front of a screen.

Technology, however, is only partly responsible..

A study done in 2004, before the explosion of smartphones and social media compared the outdoor play time of mothers and their children. 70% of the mothers said that as children they played outdoors every day. More than half spent three or more hours outside. But only 31% of their children played outside daily. And only 22% were outdoors for three hours. 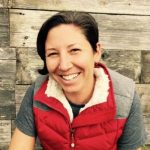 Impromptu play, as Americans knew it and practiced it for centuries, has giveb way to scheduled activities. Improvised games have been replaced by organized sports. Structured activities such as after-school lessons and, ironically, team sports contribute to a loss of free time play. In many areas parents’ “stranger danger” fears keep kids off the streets. Schools have reduced recess time and de-emphasized PE classes. Meanwhile, the availability of playgrounds hasn’t kept pace with the population growth. Many children don’t live within easy walking distance of a well-maintained — or any — safe play area, a problem especially acute in low-income areas.

KABOOM!, the national non-profit that builds and improves playspaces, recognized not long after its founding in 1995 the challenges to building traditional playgrounds, particularly in inner city and underserved areas. That’s when the organization developed the Play Everywhere concept.

“What we learned as we evolved as an organization,” explains Jen De Melo, KABOOM! director of special projects, “was that we can build as many playgrounds as we possibly can, but that’s not going to solve the challenge at the scale at which it exists.”

Besides the physical barriers to access, there are behavioral obstacles.

Taking a child to a playground requires making a conscious choice to prioritize play over other activities. Especially in low-income communities that could mean choosing play over a medical appointment or grocery shopping or work.

“So,” De Melo says, “we thought, if we really want to solve this challenge and provide play to the kids who need it the most, we need to bring play to the spaces kids are actually using and attending. And so from there, we created this concept of play everywhere.”

A Play Everywhere space can be as simple as painting the end of a street with games like twister, hopscotch and tic-tac-toe as Miami did. Five artists transformed five dead-ends into safe playspaces that encourage kids to jump, stretch and hop.

An apartment complex in Houston took advantage of its walkways, painting them with game boards, a walking maze, hopscotch and measured distances that kids use to race each other. 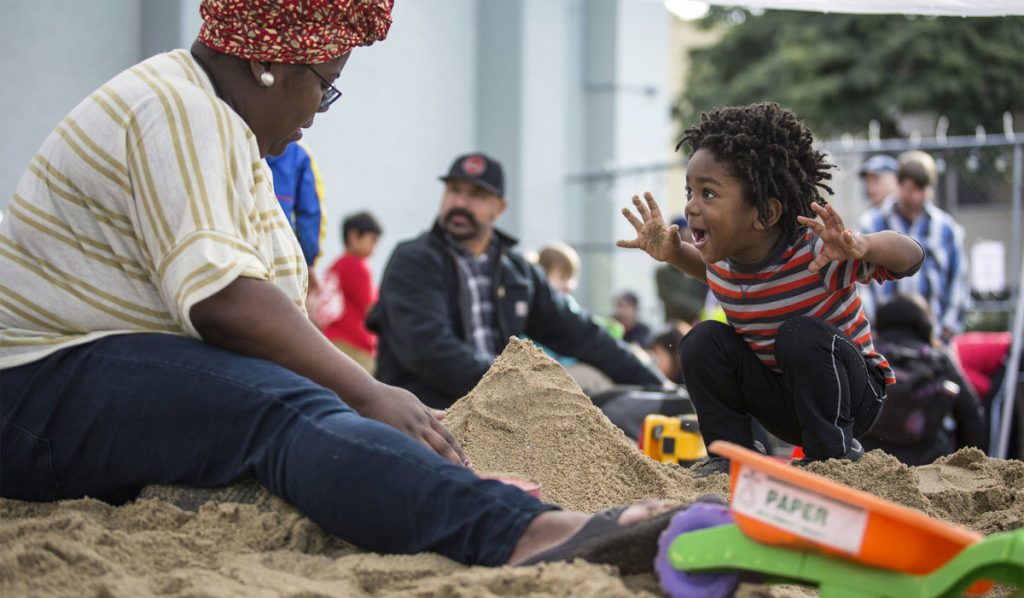 A children’s museum in Berkeley, California turned a small nearby parking lot into a giant sandbox. So eagerly did the community embrace the SandZone! that a survey found 80% of the families spend at least 45 minutes playing. Many come daily. Area businesses experienced an uptick in sales and customer traffic.

One of the more ambitious projects is Rochester, New York’s Play Walk.

It’s an urban trail that links the city’s central library to nearby Martin Luther King Park and the internationally known Strong Museum of Play. Yellow and blue dots and colorfully painted old newspaper boxes loaded with books for the taking and murals mark the almost half-mile path. Along the way are interactive features. At the park, there are musical instruments welcoming all comers to play.

At the library end, there’s a Goric foosball table so popular “the library can’t keep the balls stocked in our foosball dispenser,” jokes Jenn Beideman. 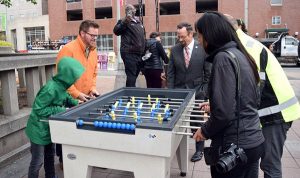 Beideman is advocacy manager for Healthi Kids, an initiative of Common Ground Health, which led the Play Walk development. With a mandate to support healthy minds, bodies and relationships for children from birth to 8, Healthi Kids focuses its play activities on non-traditional spaces. 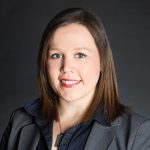 In assessing the state of play in several Rochester neighborhoods, residents and parents told the organization, “You can’t just look at parks and playgrounds, because that’s not the only places that kids are,” Beideman explains.

“In doing our assessment, we actually found out that 82% of the kids in these neighborhoods were actually playing in what we defined as those non-traditional play spaces, as opposed to parks and playgrounds.”

Play Walk is the most recent, physical manifestation of the play everywhere concept. “Places like the Play Walk allow for everyday spaces to be turned into moments of wonder and learning any kid or family can enjoy at any time,” Beideman says in an article on the Common Ground Health website. 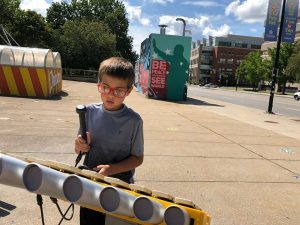 Do projects like Story Walk or Miami’s street end play area or a $5,000 investment in sidewalk art and interactive hopscotch, a balance beam and oversized chimes in a rail station underpass really make a difference?

However, success is not automatic. Gehl says the recipe is to locate these projects where people and kids already are and to involve kids in the planning and development. And to emphasize flexibility and interactivity,making sure everyone knows it’s OK to play there and what they can do.

Beideman says if there is one most important ingredient, it’s engaging with the community first.