Born Ephraim Owen Goldberg, architect Frank Gehry has brought his unique style of playfulness and whimsy to every project he’s been a part of. Whether it’s designing watches for Fossil or the artistic Fondation Louis Vuitton Center in Paris, his dramatic style is completely evident in each one of his structures. Not only that, but his influence has been felt in art and architecture for decades, both within the design industry and without. The Experience Music Project in Seattle, Washington receives approximately 800,000 visitors per year alone, exposing them to the unique lines and forms of Gehry’s work. In addition, structures like his unique redesign of Battery Park in New York could be the inspiration for a brand new generation when it comes to playful artistic form. 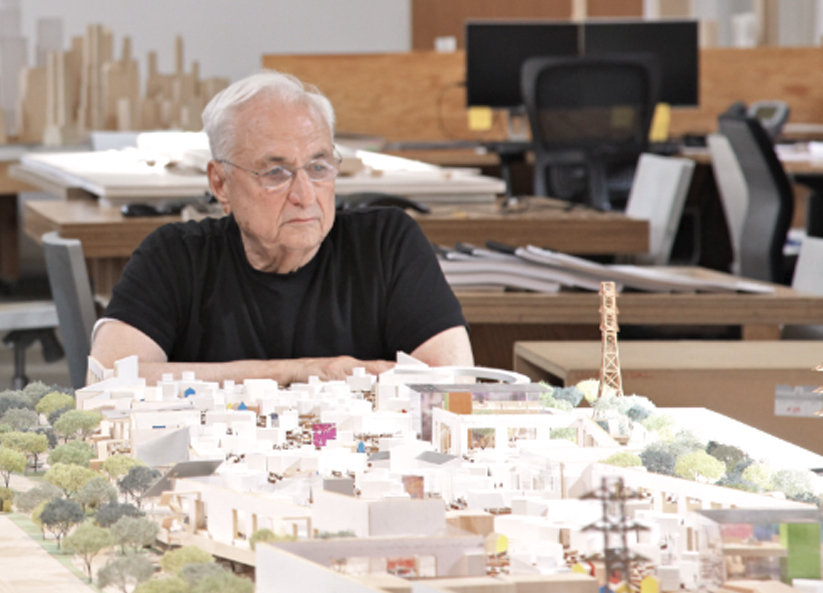 Gehry looking out over his world. Photo via 準建築人手札網站

A History of Inventiveness

Originally from Toronto, Canada, Gehry moved with his family to Los Angeles in 1947 where his father changed the family name at that time. After a few unsuccessful attempts to find his passion, Gehry took an architecture course at LA City College. Instantly, he was captivated by the possibilities of combining art and architecture. Despite his lack of drafting skills, he was able to land a mentorship with designer Raphael Soriano, which furthered inspired his passion. By 1954, he had won a prestigious scholarship to the University of Southern California where he completed his degree.

Gehry began working for LA architectural pioneers like Richard Neutra and Rudolph Schindler, Periera and Luckman, and, finally, Victor Gruen. Gruen Associates were a notable firm at the time, especially for the severe utilitarian style that characterized the period. It is possible that so much exposure to this style of architecture provided the impetus for Gehry’s extreme departure into the lands of flight and fancy. He spent a year in Paris working under Andre Remondet in order to study architect Le Corbusier’s definitive work, and returned refreshed and ready to branch out on his own. In 1962, he began his own firm, Gehry Partners, LLP (formerly Gehry Associates), and spent the next few years incorporating increasing influence from sculptors and painters like Bob Irwin, Ed Ruscha, and Ed Keinholz.

It wasn’t until the rebuild of his own home that he attracted national attention. A series of corrugated wood panels he designed for the rebuilt became commercially successful, causing designers to notice the inventive structure as it developed. Gehry reapportioned common building materials like chain link fencing, unfinished plywood, and corrugated aluminum to expose them as artistic elements of his design. Despite complaints from neighbors, the house began to catch the eye of art and architectural critics who lauded him as a design pioneer.

A newfound freedom of form began to infiltrate all of his public projects, coalescing all his knowledge of sculpture and art with a no-nonsense building style. He designed local projects in LA, including the Loyola University Law School, the California Aerospace Museum, and Walt Disney Concert Hall. In addition, he became steeped in fanciful international projects like the Vitra Design Museum in Weil-am-Rhein, Germany and the Guggenheim Museum in Bilbao, Spain. His complex forms and deconstruction and reconstruction of familiar geometric shapes led critics to dub his work “deconstructivism.” This unique style launched him into the realm of “starchitect” when in 1989 he received the world’s most prestigious architecture award, the Pritzker Prize, for lifetime achievement – not even halfway through his design career. 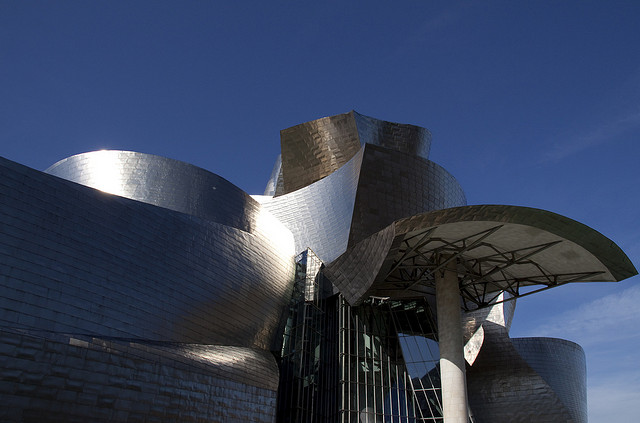 The Guggenheim in Bilboa, Spain is regarded as one of the most influential architectural structures of the past 50 years. Photo via Tony Hisgett

Since then, he has had a number of worldwide projects that have kept his work in the limelight. The Experience Music Project (EMP) in Seattle, Washington became a focal point for the reinvention of the previous World Fairgrounds in June of 2000. Gehry was also tagged to design an additional branch of the Guggenheim Musem in Abu Dhabi (2014) as well as the the Fondation Louis Vuitton, an art and design center in Paris, France (2014). But, even a new generation of entrepreneurs are captivated by Gehry’s style, as evidenced by the massive project commissioned by Facebook for a unique workspace and adult playground on its 58-acre LA campus.

But, Gehry is just as concerned about projects at home as he is worldwide. In 2012, he teamed up with former architecture student Brad Pitt to develop a series of homes for New Orleans residents displaced by Hurricane Katrina. The Make it Right charity, created by Pitt in 2005, enlisted Gehry’s help to create sustainable and affordable homes that were as beautiful as they were functional. 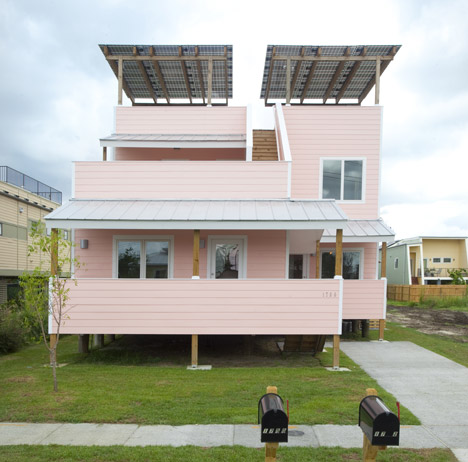 An Uncertain Future: A Gehry Playground?

Although Gehry’s designs have always had a clear sense of playfulness, it wasn’t until 2007 that he put his hand to creating a playground. When the opportunity presented itself to redesign the outdated Battery Park playground in New York, he was ecstatic about the chance to infuse a play space with equally fanciful structures – even if it meant a loss of revenue. He told Barbara Isenberg in Conversations with Frank Gehry:

“A friend in New York asked me if I would be interested in doing a children’s playground in that area, and I said, “Well, I can’t. Our fees are too high.” But I realized I was doing the Beckman Tower downtown and the work in Brooklyn, and I thought it would be a nice gesture to give something back. This seemed like the right thing to do, so I’m doing it pro bono.”

Unfortunately, things with the playground didn’t go according to plan. Instead of the $4 million project that the Battery Conservacy was hoping for, Gehry designed a $10 million that they couldn’t quite afford. With only half of the funds raised, the project – which included several dizzying slides, vegetal walls, and a child-sized birdhouse – was put on hold. Although funds were raised and the park was slated to go up in 2014, problems with water from Hurricane Sandy put the project on hold. Now, the playspace is scheduled to break ground in 2017 or early 2018, bringing Gehry’s imagination to live for hundreds of thousands of New York children.

Despite many setbacks, Gehry’s designs have the power to captivate the imaginations of both children and adults alike. Around the world, Gehry fans are clamoring to know what is next on the architect’s design bucket list. It’s certain that, no matter what his next project is, it will be the fodder for critical conversation, artistic imagination, and structural awe for decades to come.