The former Staatsliedenbuurt is an early 20th-century layout of Amsterdam. In recent years this area has undergone an extensive urban renewal. Social houses are renovated and partly sold to stimulate diversity among the inhabitants. A lot of emphasis is put on upgrading the public space’s quality. Gentrification has started but not as rapidly as seen in other parts built in the same era. Especially in the vicinity of the Van Beuningenplein the population has low incomes and consists of people with immigrant backgrounds. The Van Hallstraat, which passes one side of the Van Beuningenplein, is the demarcation line for this poorer neighborhood, which lacks public facilities. 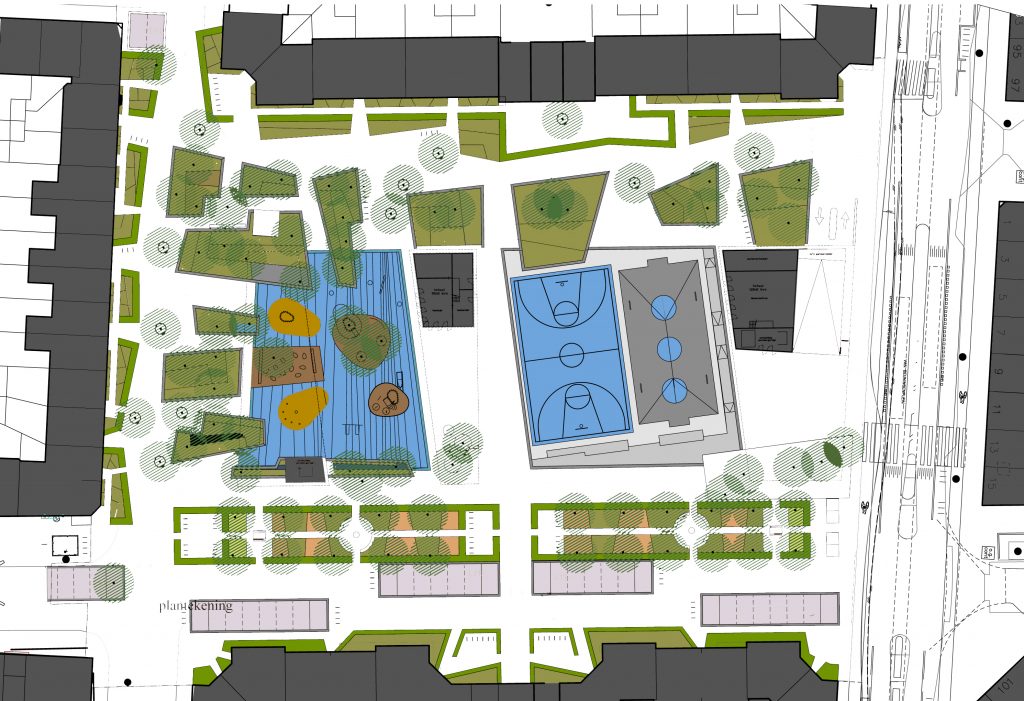 The Van Beuningenplein was hidden from view by cars, fencing and poorly maintained green, isolating a former play and sports area from its surrounding context. As a result, this hidden square had grown prone to teenagers hanging out here, often vandalizing. Residents living around the Van Beuningenplein were, although they didn’t make use of the square since it was perceived as a no-go area, strictly opposed to any cutting of old trees. The City of Amsterdam decided to construct a parking garage at Van Beuningenplein, removing parked cars from the surface and creating more open space. On top of the newly constructed parking garage, a new play and sports area were to return. This was the start for a new Van Beuningenplein.

The square had to introduce a new positive liveliness into the district. This time for everyone, safe at night, inviting children to play and citizens to find their personal place to pause, relax, to give room to engage, interact and leaving room for the unforeseen. The most important demand was to keep all existing large trees around the square which meant the new parking garage had to be carefully fitted in, leaving more space on street level for public use. 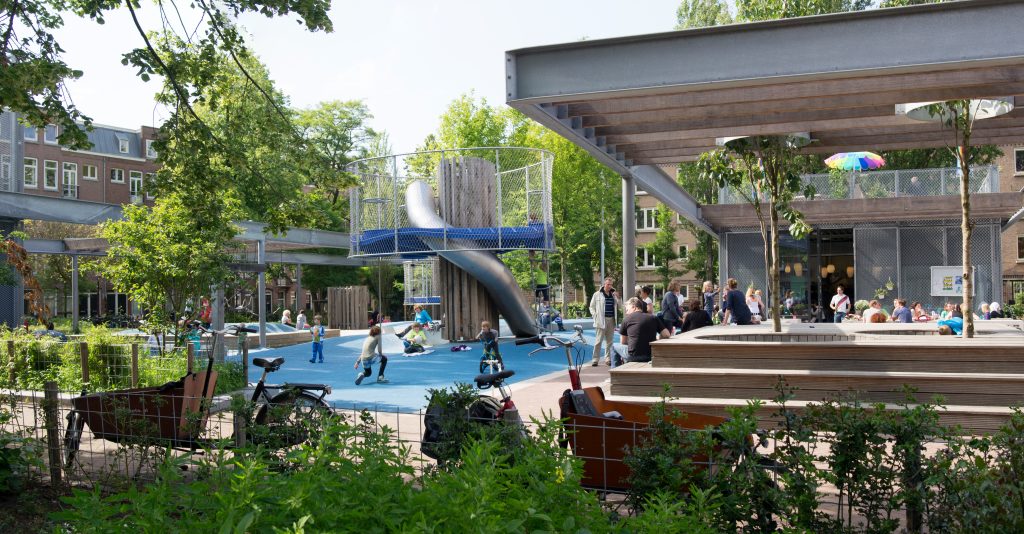 The site was designed in a collaboration between three offices, each bringing in their special expertise. The buildings were designed by Concrete Architectural Associates, the landscape concept came from Dijk&Co and the inner courts of the square, facilitating leisure areas, a playground, and sports were designed by Carve. Bringing together three disciplines reacting on each other’s proposals and perspectives has certainly added to the quality of the plan, together with collaborative processes with residents and engaging experts with their particular insides like disabled, local kids, city ecologists as the association to preserve the Amsterdam trees, etc.

Along the edges of the square, façade gardens, benches and hedges are placed in strategic locations, creating intimate green rooms for locals to sit and relax. By doing this, the previous hard boundary between private and public space has become less rigid and a colorful, lively zone in the new green frame of the Van Beuningenplein. Space for resident initiatives was left as well. 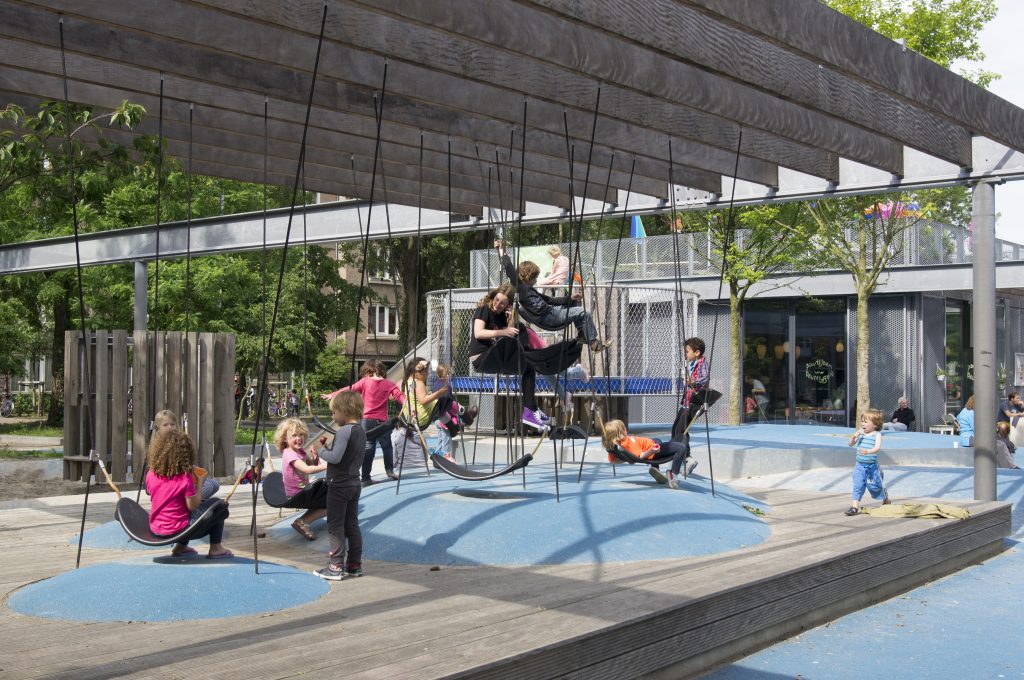 The central surface is designated for sports and play. Two adjacent sports fields allow a variety of sports like soccer and basketball. One of them is sunken into the ground, its concrete edges designed for skaters. This field can be flooded to freeze naturally and become an ice rink in wintertime. In summer, its water features turn the same field into a water playground. The Krajicek Foundation donated funds for the realization of the plans, on the condition to have a weekly active sports program for children on the square. 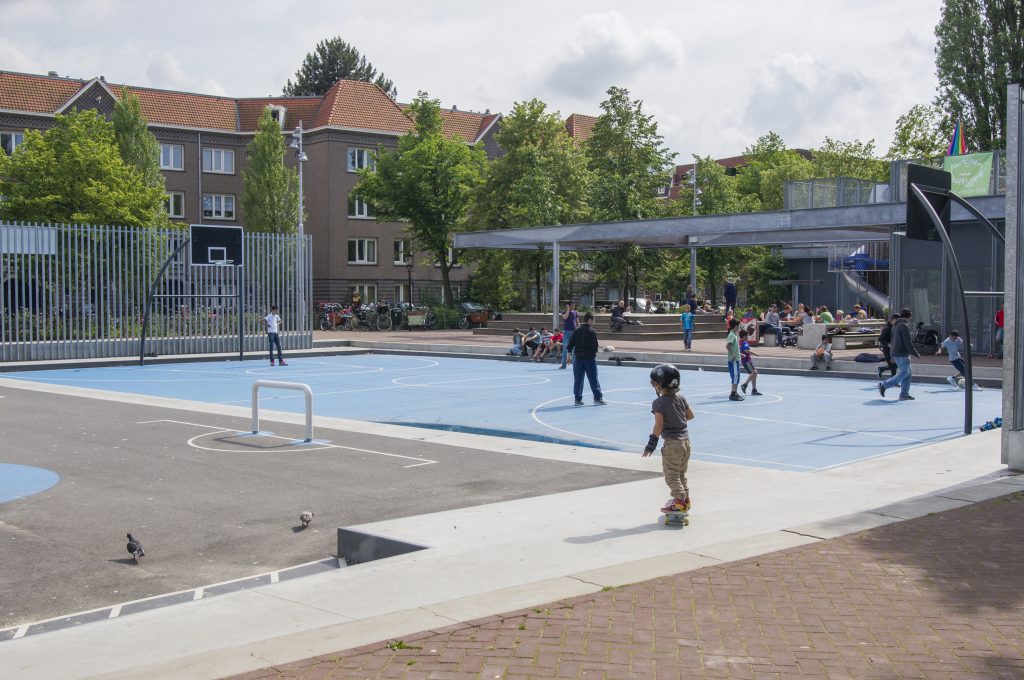 The wavy surface hosts a variety of playing towers, specially designed for Van Beuningenplein, to offer playing challenge to all ages, alongside other playing elements spread throughout the square.

The buildings added to the square are multifunctional. One grants cars access to the parking garage, one holds a workplace for a playground manager, supervising the security of the square. Teenagers can find a place to hang out in a youth center located on the square. Finally, a public tea-house with roof terrace is housed here.

The Van Beuningenplein bridges the former barrier Van Hallstraat between two neighborhoods with very different demographics. The small commercially operated tea room is large enough to make a difference but too small to dominate the square, hence contributing as a catalyst in this meeting of neighbors. Its accessible roof is already hosting a yoga program.

The Van Beuningenplein was officially opened in May 2011 and has been nominated for the biennial Gouden Klinker Award 2011, and the Amsterdam Architecture Prize 2012. 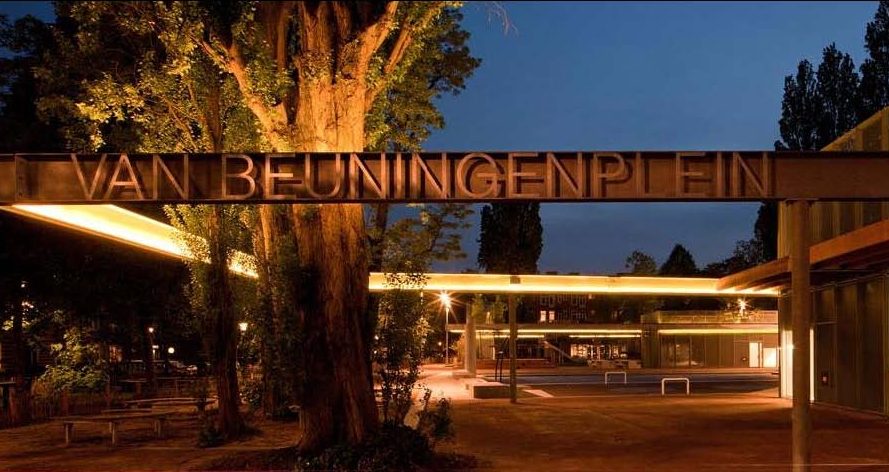