The picture Solomon paints in the introduction of her 276-page historical review and contemporary playground study is familiar to anyone who has seen the standard-fare post-and-deck playground that has become a fixture in so many schoolyards and neighborhood parks. Steps, equipment, and slides arrayed under a pyramidal roof and separated from the surroundings by a fence or gate. Yawn.

For the bite of its first line, however, Solomon’s manifesto is decidedly hopeful. Despite the blandness that pervades many American playgrounds, she argues, there is real and exciting innovation going on. 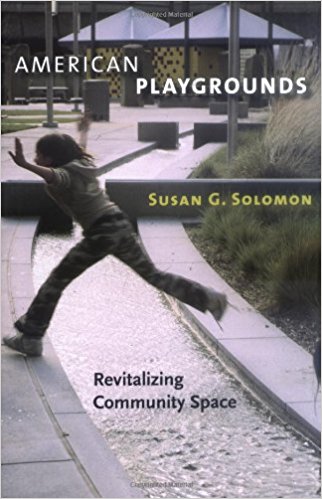 A new generation of American architects, landscape architects, and sculptors, according to Solomon, have come to view the playground as an underappreciated urban building type with great potential for innovation. In an atmosphere of generalized uneasiness among product manufacturers about the specter of product-liability and personal-injury litigation, designers such as Stanley Saitowitz, Walter Hood, and Mary Miss have managed to forge original visions, striking an appropriate balance between concern for safety and recognition that playgrounds need to be well-designed, visually interesting, and open to exploration to be used for any length of time.

Finding their roots in late 1960s New York patronage projects, such as the Lower East Side’s Jacob Riis Plaz playground, designed by landscape architect Paul Friedberg and supported by the Vincent Astor Foundation, and Richard Dattner’s Adventure Playground in Central Park, funded by the Estee and Joseph Lauder Foundation, these innovators are the progenitors of a new class of playgrounds premised on big ideas: that playgrounds can enrich children’s experiences in the world; that they can activate collective memory about a place and its history; that they can enhance community life by helping strangers and neighbors interact. They feature small intimate spaces shaded by mature trees; architecturally sophisticated climbing zones where children can experiment and make mistakes outside the corrective influence of adults; and linked interior rooms, mounds, and tunnels that echo the graceful layouts of their modernist predecessors. 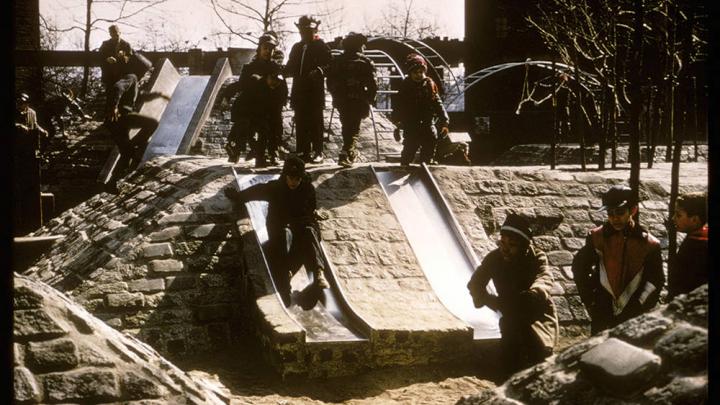 Like the sixties New York set and post-World War II European landscape architects who preceded them, these designers are not developing their ideas in a vacuum. Diverse backers, from school and social service administrators to public trusts, are commissioning these projects, as more and more parents, teachers, and child advocacy groups are calling for nuanced, site-specific layouts that include public gathering spaces, art installations, adult activities, and custom-designed play equipment (such as the Wallholla featured in last week’s blog). When the charitable interests of private foundations and a generational spirit of social concern align, Solomon suggests, good playgrounds follow. We are returning, in a sense, to the idealism and urgency of the sixties.

Solomon’s thinking on playgrounds is informed by countless interviews, architectural scholarship, and years of study. In addition to being a prolific writer on playgrounds and children’s play, she is an architectural historian, who has devoted much of her life’s work to the modernist oeuvre of Louis I. Khan, who designed the Yale University Art Gallery, the Salk Institute for Biological Studies in La Jolla, California, and a library for New Hampshire’s Phillips Exeter Academy, among other notable buildings.

Beginning in 1961, Khan worked with Isamu Noguchi on a collaborative, never-finished project for a playground in New York’s Riverside Park, near 103rd street. The park was to contain functionally distinct, but connected, rooms and quiet, sheltered places for people to meet and socialize. Most of all, it was to exist in the realm of art, as a place of transcendent beauty and imagination.

Though the project was ultimately scuttled, many of its modernist ideas have resurfaced in the playgrounds of a promising new school of architects and designers, whose work Solomon describes in detail in the final four chapters of the book. One example is Mill Race Park in Columbus, Indiana, designed by Michael Van Valkenburgh & Associates and Stanley Saitowitz, which preserves Khan’s interest in formal arrangement and “secondary spaces” for socialization. A series of structural landmarks found throughout the park, including an 84-foot-tall observation tower, a covered bridge, a fishing pier, and an amphitheater locate the playground in a broader social context. The park is consistent with Solomon’s recommendation to those commissioning playgrounds that they support projects that “enhance community life” and are founded on a “well-executed, uncluttered design.” 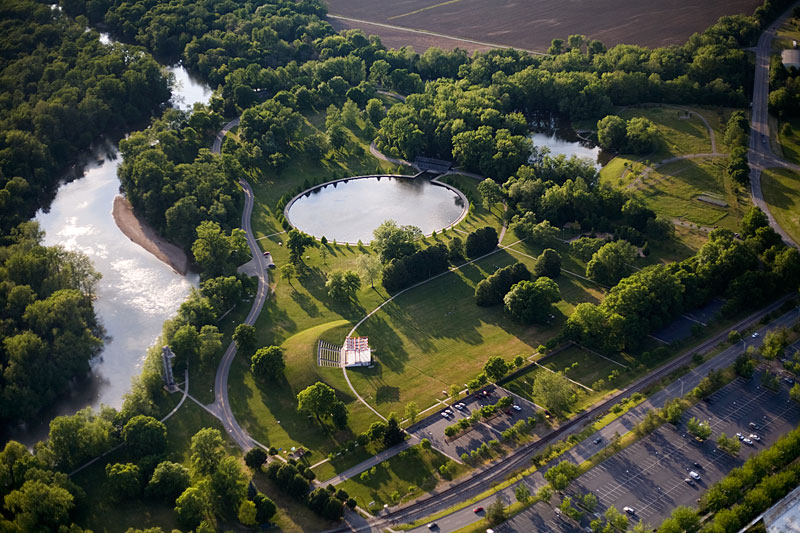 Another recommendation Solomon has for funders is to give preference to projects that “echo the latest perspectives on play by providing for individual exploration, socialization, negotiation, fantasy, and unexpected consequences.” Walter Hood’s design of Lafayette Square in a historic district of downtown Oakland seems to achieve these goals. As described in a 2001 article in Places Journal, “New and old layers interact playfully: a low seating wall curves elegantly around two old iconic palm trees; four dawn redwoods, remnants of an old diagonal path, when the square was oriented around a central space, now connect a historic oak tree with a corner plaza that will soon feature game tables and chairs. A park, a square, a lawn, a mound, a chess ground, a playground, a barbecue area. Lafayette Square’s patiently crafted landscape speaks of many people, functions and activities.”

To Solomon, it seems, as well as the landscape architects and designers she admires, a playground must be understood as an integral and dynamic part of a broader urban ecology. Context is everything.

Recently, in a blog response to Amazon CEO Jeff Bezos’ Twitter message soliciting philanthropic opportunities, Solomon praised a San Francisco parklet Hood designed for use as a traffic buffer, rest area, and climbing space. The San Francisco interdisciplinary group Rebar originated parklets, in 2005, and the city’s parking lot leasing program has since become a vibrant model of temporary public use of urban areas. The San Francisco program is run by the Planning Department, Department of Public Works, and the Municipal Transportation Agency.

Whether Bezos will heed Solomon’s call to fund similar projects in the future remains an open question, but it is nice someone so persuasive is willing to ask. She reminds us that playgrounds can be so much more than just steps and slides.