Friedrich Froebel is the “father” of the kindergarten concept. Froebel studied the natural sciences as well as architecture and had a profound understanding of the interconnectedness between the two disciplines. Under the direction of Anton Gruener, headmaster of the Pestalozzian Frankfurt Model School and in reflection of the teachings of Johann Henrich Pestalozzi, Froebel became a teacher for young children. He was greatly influenced by Pestalozzi’s respect for young children and valued the way that he created an emotionally secure environment to cultivate a child’s learning.

In 1837, Froebel, created the first “garden of children” or “kindergarten” based upon the philosophy that children would learn and develop in their own way through self-guided activities and play. Froebel’s approach was to foster a child’s self actualization and awareness by facilitating the child to discover the relationships between geometric forms and shapes, architecture, and even mathematics in the natural world around them. He did this with a combination of organized block play (“gift play”), arts and crafts with different types of materials (“occupations”), free play, songs, and stories.

What is Gift Play?

The concept behind Froebel’s “gift play,” was to share manipulatives that would allow children to explore the world around them. In total, there were 20 “gifts” that children would be given, each with their own set of developmental goals. In addition, Froebel created “occupations” that would allow children to manipulate the gifts permanently. For example, in the occupation of architect, a child might take a set of Lincoln Logs and create a housing structure. IN this example, the “gift” is the Lincoln Logs themselves.

“The gifts are intended to give the child from time to time new universal aspects of the external world, suited to a child’s development. The occupations, on the other hand, furnish material for practice in certain phases of the skill.”

“Nothing but the First Gift can so effectively arouse in the child’s mind the feeling and consciousness of a world of individual things; but there are numberless occupations that will enable the child to become skillful in the manipulation of surfaces.”

The Gifts (sets of blocks) were developed for children to play with and to experience the concept of many parts making a whole and visa versa. Each block set was made up of small blocks making up one large cube. This was conceptualized every time the child took out and put away the gift: the blocks were stored in a wooden box with a sliding lid; the children start by turning the box onto the table and carefully sliding the lid out and then lifting up the box. The child is left with the entire cube structure in tact. At that point he or she may take each block down and create something new. If the child wants to change or create a new structure then he or she must transform the previous structure and not just knock the old one down; they learn to be resourceful and to think creatively.

When it is time to put the blocks away the child rebuilds the cube with all of the pieces on top of the lid and then carefully covers the cube with the wooden box. He or she then flips over the box and slides the lid back into place. 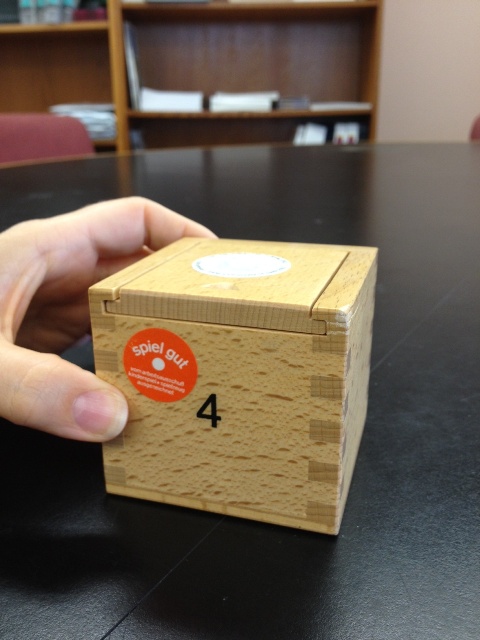 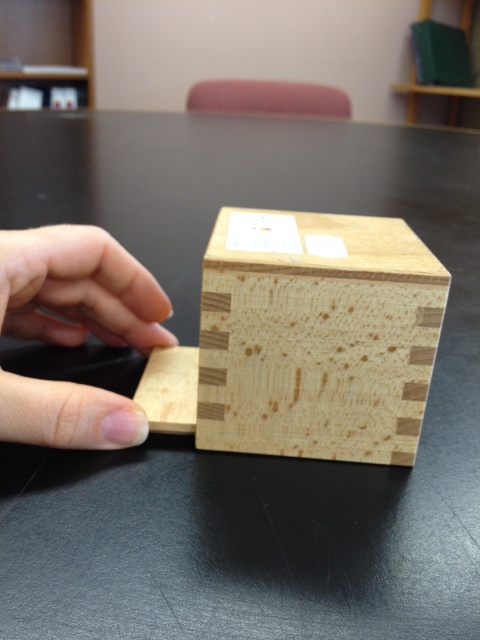 Turn over the box and slide out the lid. 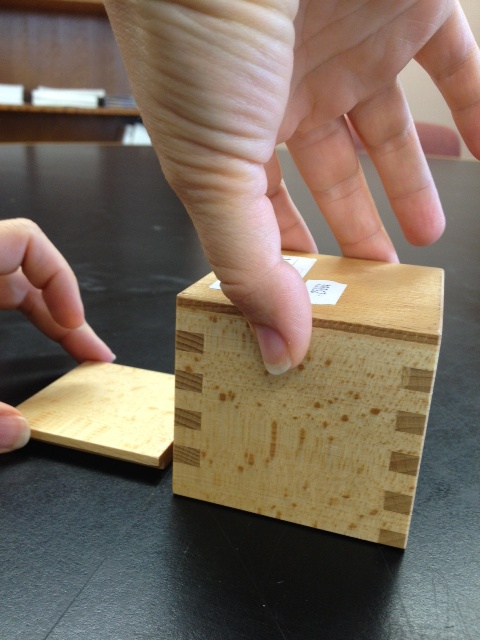 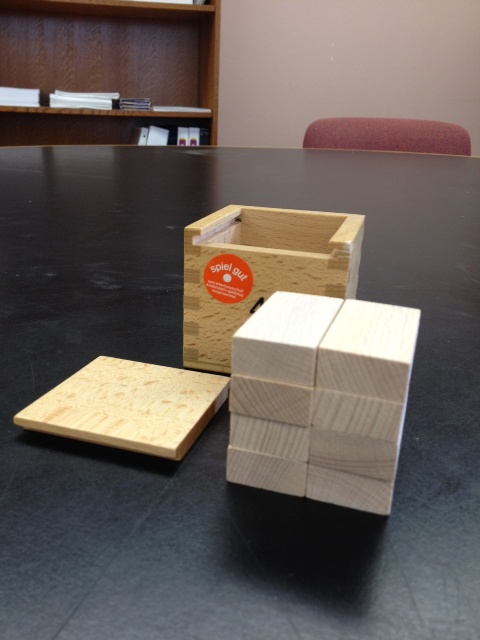 The full cube is intact. The box and lid are usually stored under the seat until it is time to put the gift away. 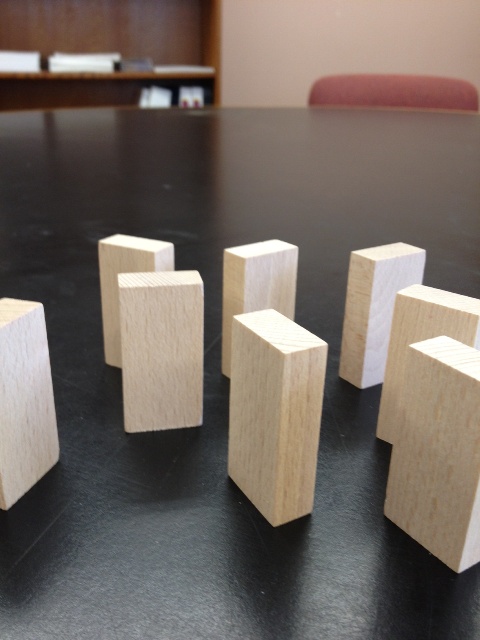 This is an example of a child’s creation with the blocks.  The story, which she will share with the group, is about a girl walking through the forest which the blocks represent. 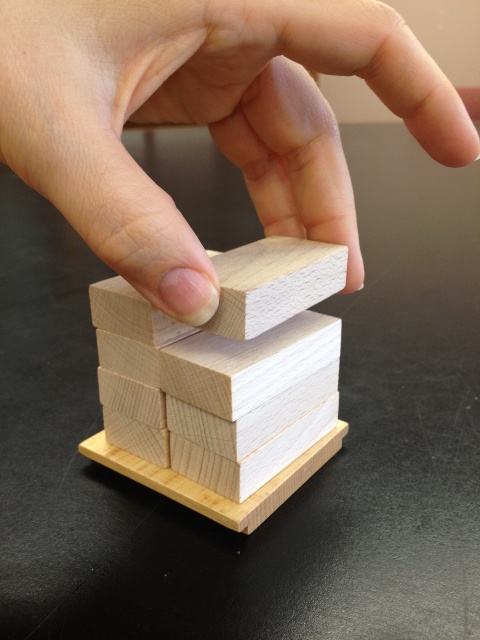 Time to put the blocks away; stack them onto the lid. 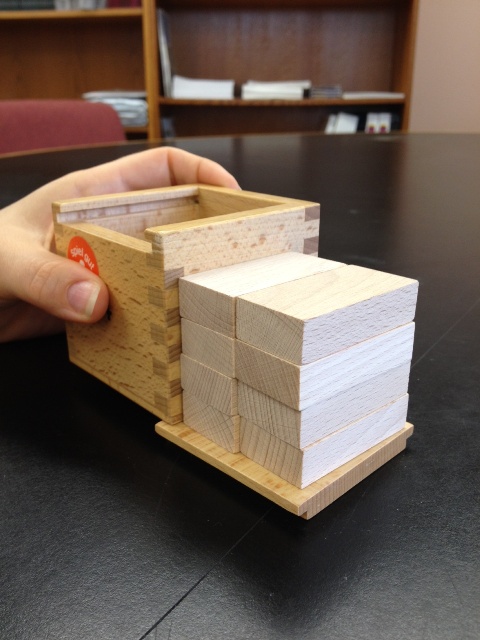 The box and/or hands may be used to ensure that the blocks are flush so that it is easy to place the box over top of them -this becomes especially important in the later gifts which comprise of many more blocks including triangular blocks in gift 5. 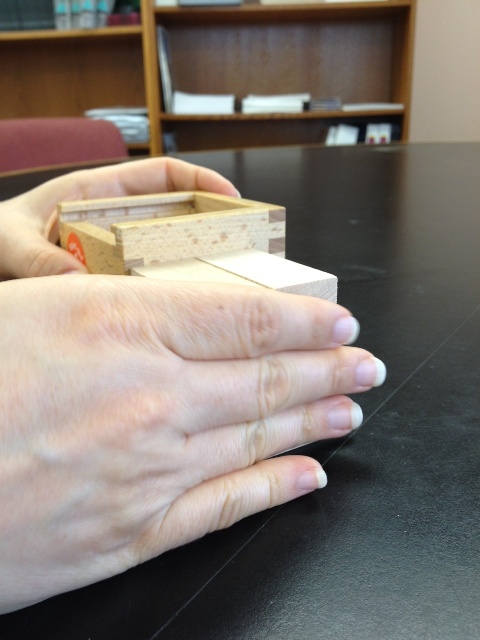 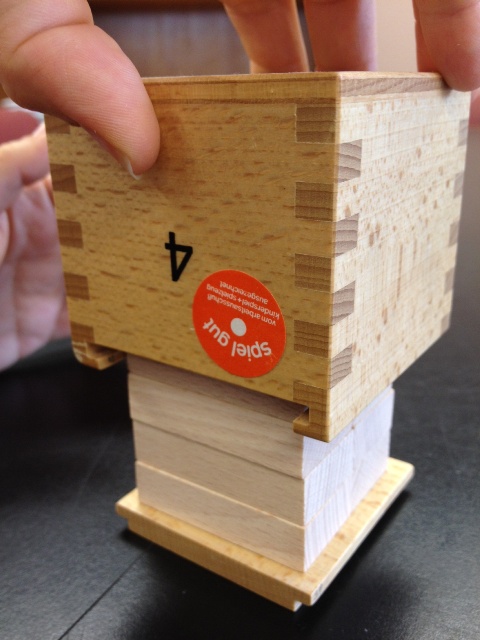 Slide the box over the blocks and turn over the box while holding on to the lid. 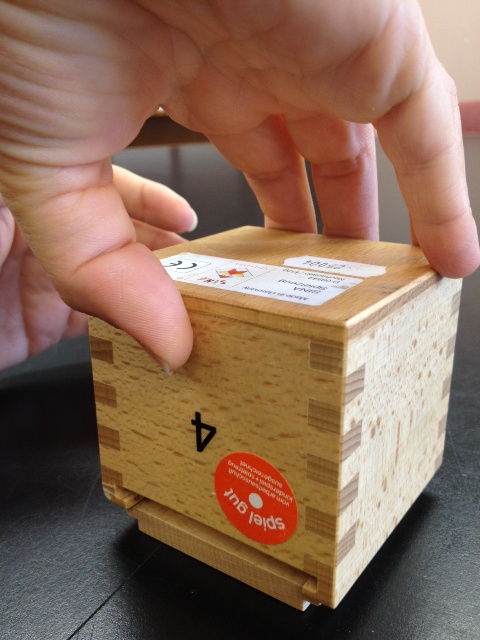 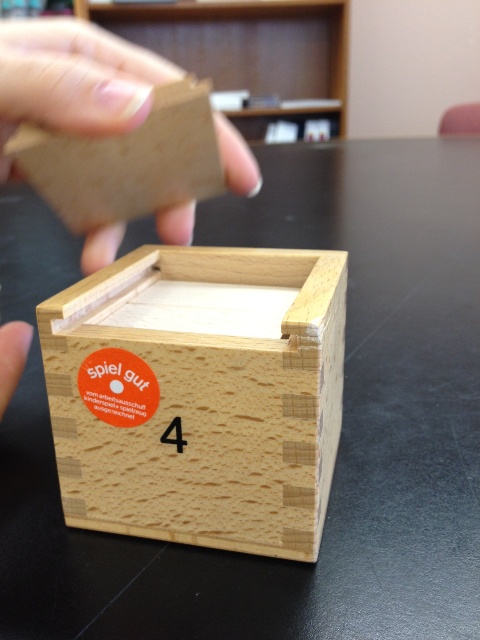 I am sure it was Froebel’s intent that the routine of taking out and putting back the blocks as described would instill a sense of responsibility and respect for the materials given to the child. This respect and understanding of how to treat what has been given to them (“the gifts”), shapes their view and the way they treat nature and others around them. This is also due in part to the way that the gifts are presented to the child as “a representation of the natural world around them”. As an adult looking back upon my own childhood experience at a Froebel School, I realize how formative this kind of “gift play” was.

In the next blog posts I will talk more about gift play and other type of play advocated by Friedrich Froebel. Stay tuned.