Former Herzog & de Meuron architects Coryn Kempster and Julia Jamrozik started a multidisciplinary architecture practice in 2015 with the aim of bringing together their varied interests in visual arts, public education, and architecture.The duo’s work cuts a wide cloth, from temporary installations to permanent architectural projects, from oral histories to playspaces in disguise.

Recognized with the League Prize of Architectural League of New York in 2018, the couple, who split time between Buffalo and Toronto and who teach in the Department of Architecture at the University at Buffalo SUNY, have been making a name for themselves with projects like Sky House and Vertical Line Garden.

Their work is arresting, among other reasons, because it gives new meaning to ordinary things. Take, “Full Circle” a swingset on Buffalo’s West Side whose swings are arranged in a hemisphere, not a linear row. It is hot pink. It seems risky, because, once seated and moving, you’re rushing headlong toward someone else. And the directional orientation forces you to make eye contact with and, perhaps, talk to the person seated across from you. It’s a swingset, but it’s also an evocative sculpture and neighborhood conversation starter.

More recently, the non-profit KaBOOM! awarded Kempster and Jamrozik a Play Everywhere Challenge grant to design and install three scalable play interventions in western New York. One will be built at Lyndonville Elementary School in Orleans County. The couple is partnering with Goric to fabricate soft, tactile “fun” bricks for the modular structure. We spoke with them about their plans for the project, their unconventional approach to playground design, and their recent invitation to submit a proposal to the 2019 Seoul Biennale of Architecture and Urbanism. 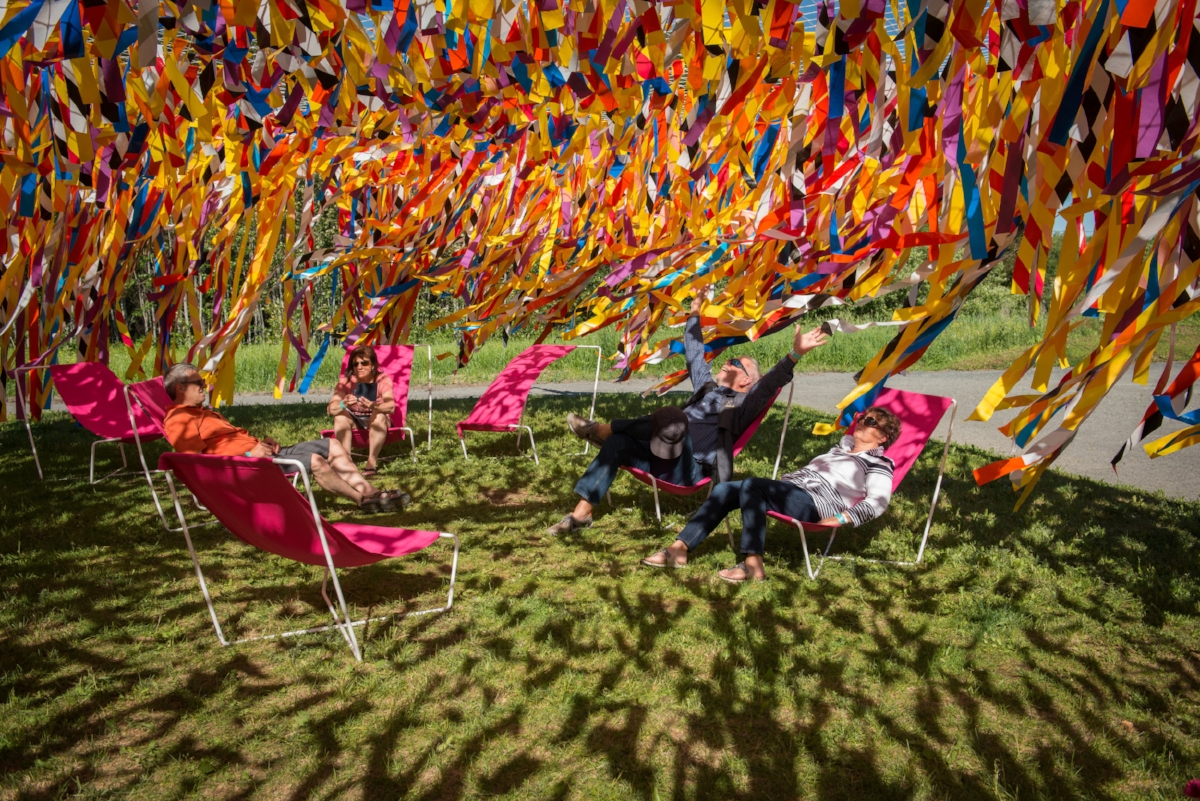 How did you get involved with Goric on the Lyndonville Elementary School project?
JJ: In the bleak landscape of North American playgrounds, Goric is one of the few companies that seems committed to alternative designs, not just accepting standard solutions; it’s good that there are some companies like that.

What are you hoping to create?
CK: We’re trying to develop “fun bricks,” modules you can add together and stack like bricks. Initially, we want to create a space close to the entrance of the school and cafeteria that will have a dual life, serving children and adults. Because of the opioid crisis, many of the caregivers are grandparents, and there is nowhere for them to sit and wait for kids at pickup. The structure will provide seating for adults, and double as a play space for kids. Also, within the community, some people are reluctant to seek government services and administrators are hoping a colorful, engaging outdoor space will make outreach easier. They see an opportunity to use the installation as a landmark to host outdoor gatherings, which will help the more marginalized members of their community feel more secure because they do not have to actually enter the building.

We’ll start with 50 modules and do an in-school workshop. We will 3D print mini bricks so students can experiment with various configurations. We’ll analyze those and use them to build the final form, which will be built by fall when school starts. In the future, we’re hoping the project can be scaled. The bricks will be fabricated as individual units and reconfigured in fixed structures at other sites, with infinite flexibility in design.

A key theme in your work is the use of familiar objects and materials in unconventional ways. How does this artistic framework encourage interest in play and social interaction?
CK: As part of submission for the League Prize, we developed categories that have become a productive framework for thinking about work. One of the categories, social infrastructure, is part of the reason we began talking to Goric. We recognized for a variety of reasons, including mobile technology, that people—and we include ourselves in this—are engaging less with others in public spaces. We’re trying to form an art and design practice around creating physical spaces where people can interact with one another, even briefly, and find common ground. There is so much disunity and divide in the world, we hope, in a small way, these tiny interactions can add up to a broader understanding of tolerance.

It’s like with Full Circle. Arranging the swings in a circle, makes the experience about communication. People are more present in the space, interacting with others. Riding the swings, everyone has the misimpression they will collide, though they won’t; that slight degree of perceived risk is part of the fun. Or with Hook Up, when the swings are linked together, unless you are riding alone it is impossible to swing without communicating with others. Part of the experience you are signing up for is to give up a certain degree of control, and the risk inherent in that is part of the fun.

You’re critical of North American playgrounds and play equipment. Why?
JJ: North American playgrounds are often extremely repetitive and only intended to be used in particular ways; everything else is considered misuse. Because they are engineered to be extremely safe, boring, and repetitive, they offer little in a community space, especially once it is gated and closed off. That’s not a criticism of the people who install them; they’re working with what’s available. And you can’t blame the manufacturers, who are at the mercy of litigation and risk management. But the result is that extremely mediocre playgrounds have become ubiquitous on landscape. It nobody’s fault, but everyone’s problem. 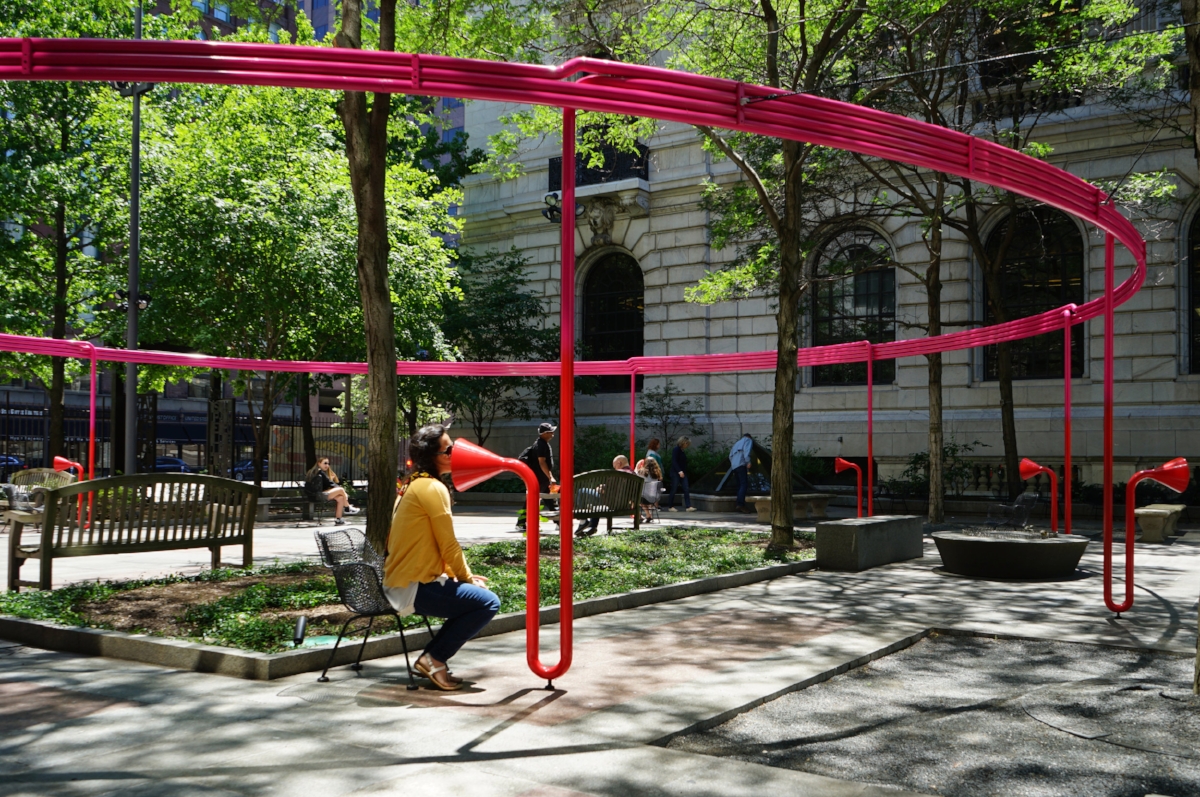 How would you like things to change? What would better playgrounds look like?
CK: One of the things were very interested in is the “city as a playground” model of Aldo van Eyck. He created 700 playgrounds in Amsterdam in the 50s and 60s, with the idea they would be integrated in the city on a small scale and everywhere. This is different from today, where we tend to see larger playgrounds, farther apart. Playgrounds can be more than single use islands for children. They can be integrated into the infrastructure of the city—at bus stops or near roadside benches. Van Eyck has a great quote: “The playground has to be real enough to have a life after children go to bed.” You want teenagers there at night and adults hanging out there.

You have something like this in mind for the 2019 Seoul Biennale of Architecture and Urbanism, right?
CK: We were invited to apply to the Seoul Biennale of Architecture and Urbanism to represent Buffalo. If we’re selected, our entry will be part of an exhibition about what’s important to a city. We see a synergy between the empty lots and economic degradation we see here in Buffalo and the bombed out post World War II cities of Europe, which is one of the reasons we’ve been so fascinated with van Eyck’s “city as a playground” idea. 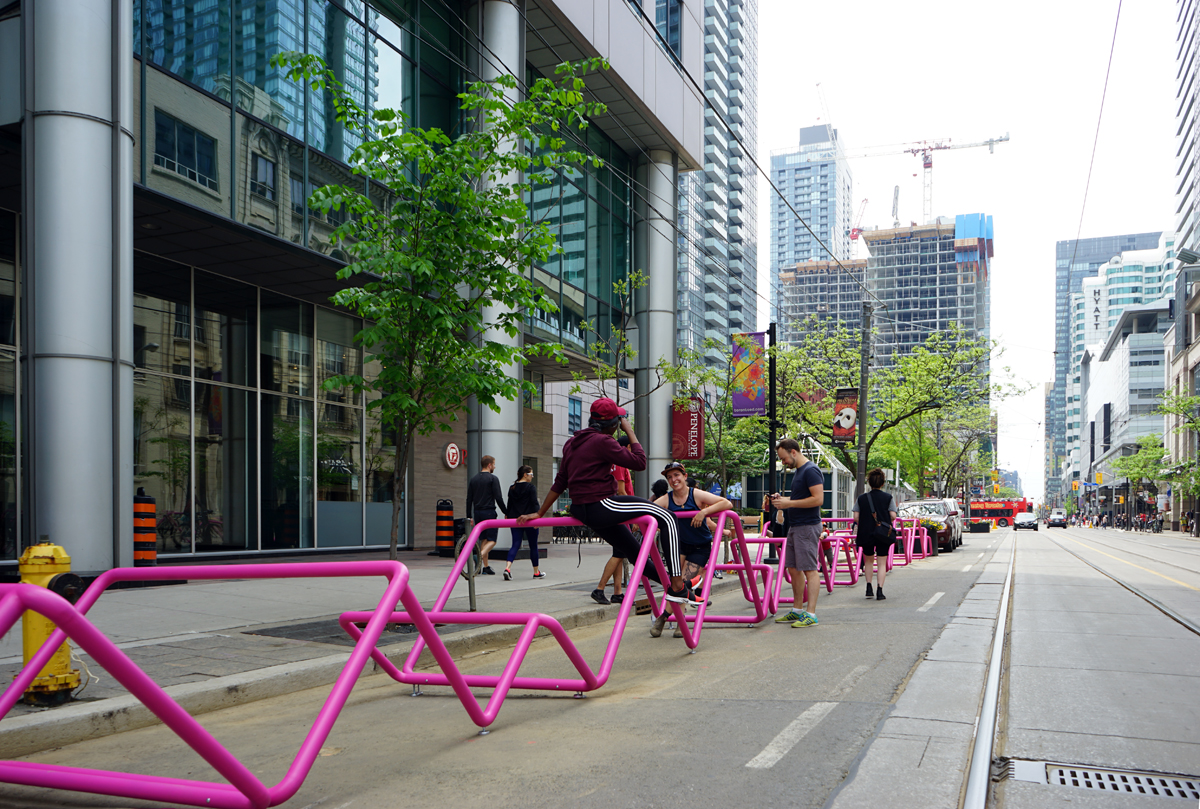 Tell us more about van Eyck’s influence.
JJ: The simplicity of his play structures, and their non-representational quality, these are things we’re very conscious of. Pure play. Kids can bring own ideas to playspaces, if the equipment they are allowed to interact with is simple enough. The networked idea of Amsterdam’s playspaces has been extremely influential to us. ‘How do you do something simply, on a tight budget, and integrate people who want to use it, not make fences?’

CK: I’d add that Van Eyck believed in variety and identity in playspaces, as well. Not every structure had to be round or the same color. One of the things we found out recently, which we couldn’t have planned for, but have been wonderfully happy about, is that Full Circle, the pink swings as they’re called in the neighborhood, have become a landmark and meeting place. A local refugee aid organization has told us that as refugees are getting resettled, the swings are a place they can go to do something normal and have other people see them doing something normal, and this type of interaction helps this new population integrate into the community.