It didn’t take much digging to find that world premiere playground designer and design lecturer Elger Blitz has been making waves for over 25 years. From his humble beginnings on the gritty streets of Amsterdam, Blitz learned to appreciate and manipulate the world around him into being a place where people of all ages could play.

In the mid-80’s, Blitz was an up-and-coming vert skater, sponsored by major companies like Santa Cruz Skateboards and Amsterdam’s Rodolfo’s Skate Shop. In an off-the-cuff interview with independent magazine F.A.T., Blitz was asked to define his greatest strengths. He answered, “Having a big mouth that I don’t keep shut.” (“Interview with Elger Blitz,” F.A.T Zine)

This no-nonsense ability to stand and deliver, as well as his street-level love of urban spaces, has helped to make Blitz one of the world’s most renowned experts on intergenerational play areas and skate parks. In addition, his interest in taking forgotten urban zones and making them into active recreation areas has led his design firm, Carve, to a number of architectural and design awards around the world.

After graduating from the University of Amsterdam with an Honors BSc in Architectural engineering, Blitz’s unique insider perspective on skateboarding and young adult play areas landed him “accidentally” into the field of playground design in the early 90’s.(“Elger Blitz,” Carve) This happy accident led him to a number of groundbreaking skate park and playground designs, which eventually inspired him to create the Carve design studio which operates out of his hometown of Amsterdam.

Carving Out a Design Niche

Under his leadership and cutting-edge vision, Carve proved to be one of the most innovative design studios in Europe, seeing opportunities for play and recreation where others only saw urban decay. Between 2002 and 2015, Carve’s design team has been nominated for both national and international awards over 20 times.

One of the most influential designs that Blitz was involved with was the A8ernA project in Koog ann de Zaan, Netherlands. High traffic in the city necessitated a new highway that split the city into two segments with an empty urban space beneath. He was invited by NL Architects, who played the role of lead architects on the project. Blitz and his team redefined part of the abandoned space, creating a multilevel skate park. They succeeded in their goal of developing a multigenerational space, and the A8ernA project became a renewed hub of activity. In addition, the forward-thinking project won NL the worldwide recognition that it deserved, including the European Prize for Urban Public Space (2006).

Since then, Blitz has led his company, Carve, to the international design stage through the development of unique urban designs. One of the most notable nominations was for the unique Wallholla play structure that Blitz’s team designed to maximize play in small urban areas. This structure alone gave them national recognition as it led to a nomination for the Netherlands Design Prize in 2006. And, Blitz later worked with Goric to bring this award-winning structure to the U.S., where it has been a major feature of the Lorber Family Playground in Boston, MA. 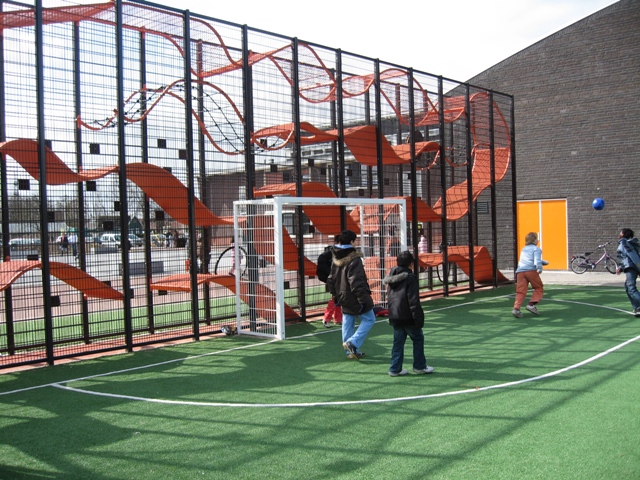 The Future of Blitz

Elger Blitz continues to create and develop unique play areas for both children and teens alike, with an increasing focus on urban areas, natural play in urban settings, and inclusive play. Blitz is also considered one of the foremost experts on skate park architecture, and has been a featured lecturer at universities and design schools around Europe. He acted as a jury member for the Reclaiming the Street skate park and urban design competition sponsored by Showroom MAMA in 2010, and recently curated a design contest on behalf of the Centre for Visual Arts and Amsterdam Design Bureau to find innovative play structures for a new play area in the western Netherlands city of Dordrecht.

In addition, Blitz seems to be branching out into a new space – one where play design and architecture meet. In 2014, the municipality of The Hague approached Blitz and requested a youth center. Even though Blitz doesn’t consider himself an architect, the freestyle skateboarder rose to the challenge. He said:

“Although I’m not an architect – I’ve started various architecture programmes, but never finished – I had the feeling that I could do it. The project was also an excellent opportunity to expand upon a theme that runs through our work: the connection between a building and public space. Tags and other artistic expressions are welcome, but the facades must be easily cleanable. In the sunken circles that we made in the concrete, paint residue will be left behind, so that the history of the graffiti becomes readable.”(Kirsten Hannema, “Debut: Youth Centre” A10.eu)

It’s this desire to leave a mark, and the appreciation of all the younger generations trying to carve their own name in history, that still fuels Blitz today. And his playground structures and skate park designs are the kind of long-lasting legacy that can never be removed.