As a child on a small farm in southwestern Arkansas, Joe Frost played with his friends in the foothills of the Ouachita Mountains. He played war and chase, built dams in the stream behind his grade school, and piled on his classmates in a game called “Dog Pile.” He devoured library books, government  pamphlets, comics, anything he could get his hands on. His interest in playgrounds came from all that, but also from working with his hands. Growing up, he worked on his family farm, and as a mechanic with Boeing engineers on B-52 bombers. His upbringing laid the foundation for a distinguished career, in which he became recognized as the contemporary father of play advocacy.

In an interview for the fall 2008 issue of the American Journal of Play, titled “What’s Wrong with America’s Playgrounds and How to Fix Them,” Frost, Parker Centennial Professor Emeritus at the University of Texas, Austin, shares the joys of his Arkansas childhood, while lamenting the current state of children’s outdoor play and playgrounds in the United States.

“It isn’t good. A perfect storm of events is changing the structure, function, and use of children’s playgrounds, and by that I mean all the outdoor places, built or natural, where children have always played. Over the last thirty years in particular, spontaneous outdoor play of all kinds has declined, both in vitality and in quality. Playgrounds and recess have fallen out of favor in neighborhoods and schools. For all our human history, even before playtime at school was called recess and grounds for play were called playgrounds, children had respites, time-outs, interludes, or breathing spells for free, spontaneous play outdoors. Now, for the first time, all across the nation, children are being removed from such places, and the consequences for health and development are destructive and profound,” Frost is quoted as saying.

Asked by the interviewer to spell out those consequences, Frost cites limitations to children’s cognitive, social, language, and physical development and ability to cope with trauma. He goes on to share the findings of a clinical report by the American Academy of Pediatrics, which, by contrast, cites healthy brain growth, development of multiple competencies, and increased leadership skills as benefits of play, and a study supported by the Robert Wood Johnson Foundation that looked at more than 11,500 kindergarten through-eighth-grade students in 1,000–plus schools and concluded that what happens at recess is just as important as what happens in the classroom when it comes to issues such as depression, violence, or obesity.

Frost’s dim view of contemporary outdoor U.S. play and playgrounds should not be taken lightly. In a more than fifty year career, he has taught child development and early childhood education at Texas and several other universities, written more than 20 books and more than one hundred articles and reports, and served as president of the Association for Childhood Education International and consultant to the U.S. Consumer Product Safety Commission, the U.S. Department of Justice, and cities, schools, universities, hospitals, and public park systems. He’s spoken at conferences and panels on poverty, race and education, and shared a stage with Dr. Martin Luther King.

As an eminent voice in children’s play advocacy, his writing often stresses the importance of children’s free, spontaneous play and the dangers adults pose when they are poor role models or overly cossetting, pedantic, or intrusive. He takes at aim at high-stakes testing; fatty, high-calorie food; inflated parental fear of criminal activity against children; and children’s unsupervised use of television, computers, and video games, which he writes in an article in a 2004 issue of Archives of Pediatric and Adolescent Medicine are too often “used as babysitters.” He is as much an unflinching social critic as a playground advocate.

When it comes to design, he is critical of school and community sites that are “’dumbed down’ (for children’s cognitive, social, and creative development) in deference to safety standards, fear of injury and liability, and the political obsession with academic testing.” These playgrounds might have “a standardized superstructure and swings,” Frost notes, but they lack natural areas —gardens, animal habitats, building areas, sand and water — to excite children’s imaginations, and the kinds of varied fabricated and improvised equipment that can advance their perceptual-motor skills and social development. 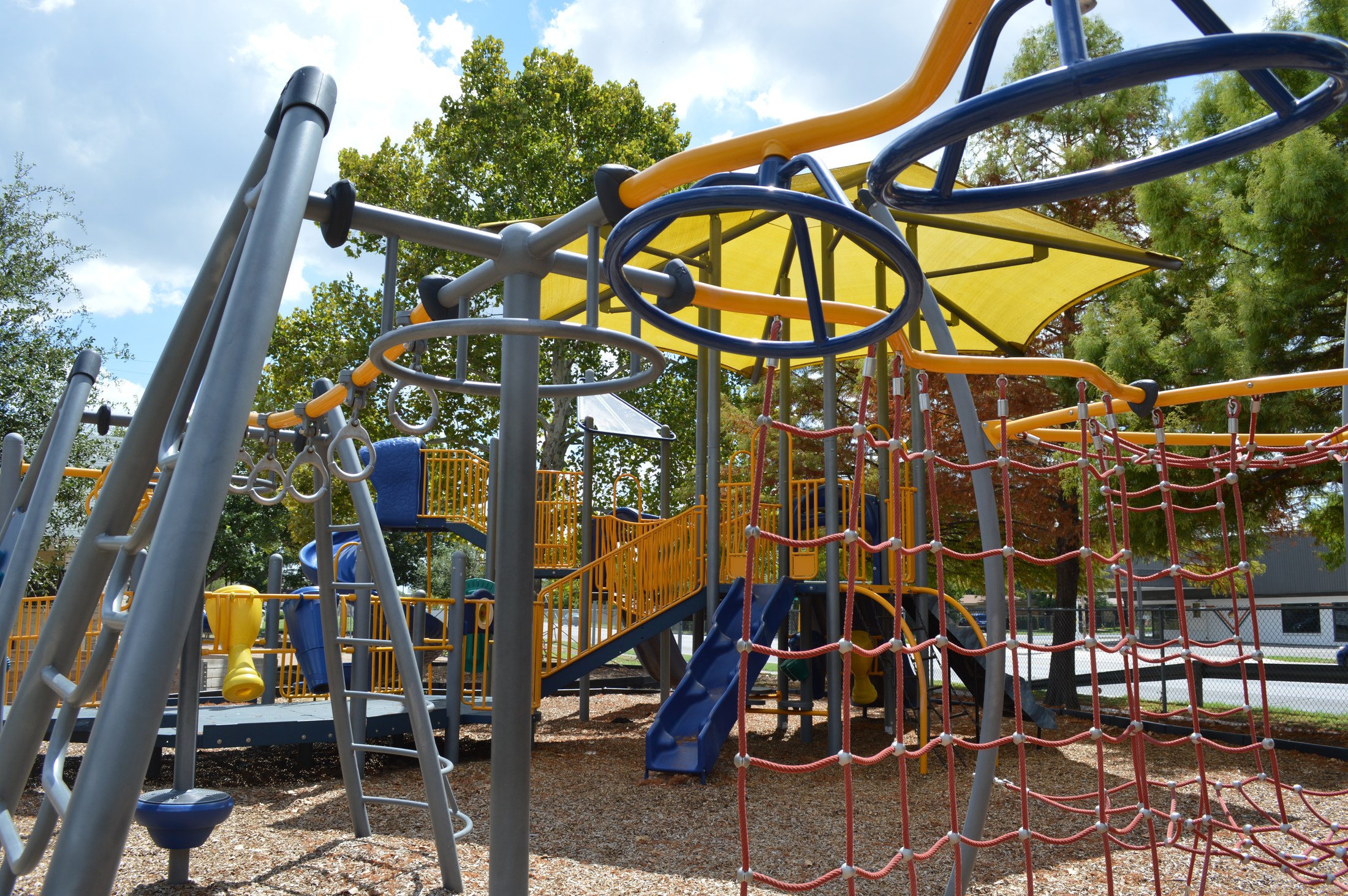 While Frost’s writing and public commentary about play and playgrounds is often feisty and unequivocal, it suggests a hopeful way forward, which is seen in several of the designs on which he has consulted, including one of his most well-publicized efforts, the University of Texas Play and Playgrounds Research Project. Began in 1973 at the Redeemer Lutheran School in Austin, the project features three playgrounds with manufactured play equipment, herb gardens, wetlands, butterfly gardens, gazebos, greenhouses, and animal habitats. Built by university students, children, and parents from scrap and donated materials and used as the site of the longest continuous study of play in the United States, the playgrounds have been the subject of journal articles, book chapters, and doctoral dissertations. 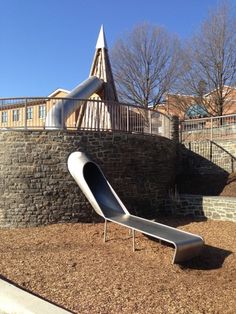 Frost has consulted on a number of other notable playground designs, including the Scottish Rite Hospital for Crippled Children in Dallas, the Beauvoir School at the National Cathedral complex in Washington, DC, a cluster of playgrounds in Houston’s Hermann Park/Medical Center complex, and the Tiny Tots Nature Spot at the San Antonio Zoo. While all very different in use and form, these projects together reflect the themes that run throughout Frost’s career as a design consultant: a dedication to poor, sick, and disadvantaged children, the use of wildscapes and playscapes as a part of therapeutic recovery programs, and the integration of natural landscape elements such as hills, sand, and mudholes.

As he says near the end of the American Journal for Play interview, “Architects, naturalists, manufacturers, self-build proponents, and others are capable of designing and constructing good and bad playgrounds. We just need to ensure that we build good ones—playgrounds that provide props, natural and built, that invite and accommodate various forms of play in restricted spaces. Fortunately, Americans are gradually realizing what children have always known, and what history has always shown, and what research has demonstrated throughout the past one hundred years—play and play environments matter.”

His work holds currency today, when the threat of litigation weighs heavily on designer’s minds and can lead to timid designs (though this is surely changing). The limited opportunities for risk-taking some U.S. playgrounds offer is compounded by the fact that children can get so easily swept up in YouTube videos, Snapchat, or whatever the latest app craze happens to be. How many restless children, seeking adventure and discovery, grow bored with the standardized play options available at playgrounds and conclude, consciously or otherwise, that the virtual world is simply more exciting? Perhaps what’s most interesting about Frost is how naturally his beliefs about play lead back to his childhood in rural Arkansas, which is anything but boring and and mostly about the freedom of unbound play.

“We played in the fields and woods and streams. I also had occasion to play and work in the vacant lots, streets, and junkyards of a small city, where I learned how to sort junk for a junk dealer and how to watch for cops and keep them away from the crap games played by older boys back in the alleys. I also played in our country schoolyard and the woods around it. We had recess morning and afternoon, plus an hour at noontime for bacon, biscuits, and more play. We also played while waiting for our rickety school bus every morning and afternoon, which meant most days we had five play times.”